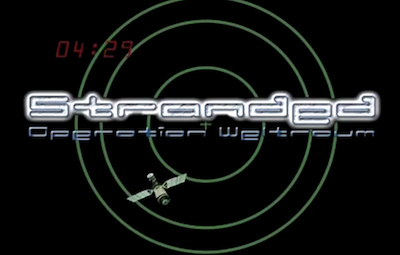 Overview: Ice-T is an NSA agent who runs around pimp-slapping morons with Bullwinkle-level fake Russian accents and inventing whole new ways to violate people's constitutional rights while dunking in their faces with bewildering and hilariously inappropriate quips. Meanwhile, some other idiots float around in space doing absolutely nothing because they lost the keys to their dumb ship or something. Somehow these two things are supposed to be connected and form a coherent movie plot.

The Case For: The Ice-T video.

The Case Against: Not enough Ice-T. 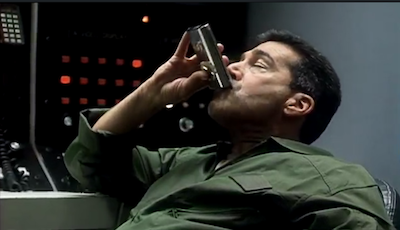 We meet again, Fred Olen Ray, for the third time. Honestly it's actually shocking that we've only come across two Fred Olen Ray movies so far, given that the man has a staggering 143 directing credits, which to put it in perspective is almost as many shitty B-movies as the entire fucking Asylum production catalogue. This seems like an impressive feat, until you actually watch one of his movies and realize that even though they take up 90 minutes worth of perfectly good tape and human life, each one only really has about 5 minutes worth of actual content in it, tops. In fact, our far superior cut is only 2 minutes long:

There, not only did we save 88 minutes of your life, but our version has the virtue that all of the insufferable dickheads actually die in space like they deserve, instead of getting unjustly rescued. The footage you're missing out on consists entirely of stock footage, the best "space turbulence" camera-shaking action this side of a fan-made Star Trek episode, and even more long, pointless filler shots of that SPACE ELEVATOR, which is somehow less exciting than a regular elevator. Oh, and Ice-T starring in his own mini-movie that has very little to do with anything else:

The action in Stranded revolves around a Russian space station which has to be the most worthless shitcan pile of garbage ever put into orbit. Every time a puff of space dust comes along, it gets shredded like tissue paper in a wheat thresher and everyone onboard (almost) dies, which frankly they sort of deserve. We're not saying we have no sympathy for the brave men and women who get sucked out into the cold dark vacuum of space, but maybe before they signed up for this suicide mission they should have asked some basic questions like "Why is the space station which you're sending us to parked in the part of Earth's orbit that gets hourly meteor swarms, why is it made of recycled aluminum cans, and why does it have floor-to-ceiling plate glass windows everywhere?" Also, usually most of those brave men and women aren't insufferable assholes with the collective IQ of a cat turd and the personality of a brony convention.

That would all be bad enough on its own, but good ol' Fred just can't help himself from trying to add five or six more sources of "dramatic tension", thus transforming a perfectly mediocre space disaster movie into a confusing parade of terrible decisions[1]. For example, on top of the meteors, the space station is also falling out of orbit due to the greasy machinations of Evil CEO Guy (tm), whose amazing get-rich-quick scheme involves somehow destroying the billion-dollar installation that his own company owns - while his own niece is onboard - because apparently you can just call up Geico and get Space Insurance for those now. Also, the NSA is trying to steal some Russian space secrets, but oops, forget that, the NSA agent decided to get sucked into space by being a dumbass instead. 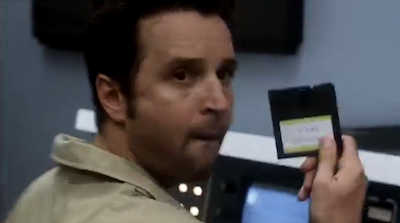 In space, no one can hear you copy that floppy.As you might've guessed by now, the space maroons up on the International Bean Can are, in fact, Stranded. Someone suggests that instead of just sitting around and waiting to die, they should maybe use the escape pod/Apollo capsules that are glued to the side of the fucking station, which we have to point out maybe they should have just used in the first place instead of calling the space shuttle to come pick them up like some kind of $400 million dollar Uber. Sadly, the escape capsules have an advanced safety feature: they can only be launched with a secret code. A secret code that only one person on the whole station knows. You know, just like how on a cruise ship nobody can get into the lifeboats without the one key that the random crewman has around his neck and is the only copy in existence. Wait, no, that would be goddamn retarded.

We could go on and on about the 15-minute argument over who gets to commit suicide, the random gibberish that appears on every high-tech NASA screenshot, or the drunken Russian captain who is also the only interesting character, but there's no point. In fact, we probably could have just stopped the review at "this is a Fred Olen Ray movie". At the end of the day, just knowing that Stranded is from the man who brought us Hollywood Chainsaw Hookers, Scream Queen Hot Tub Party, and Bikini Frankenstein oughta be enough to keep you away.

[1] "A Confusing Parade of Bad Decisions" would be a great name for a Fred Olen Ray biopic, in case for some reason you want to make that.