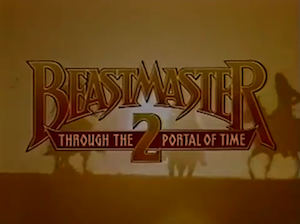 Overview: An evil barbarian warlord with a laser gun that also opens a magic portal to 1980s Los Angeles because why not decides he wants to steal a nuclear bomb, which will definitely intimidate his unwashed illiterate barbarian subjects more than the M1 battle tank he walks directly past to get to it. Our only hope is the Beastmaster, a slab-browed meat mountain who has the amazing power to make tigers (and movie audiences) slightly hungry and then bored. Meanwhile, LAPD's finest, after calling in armed backup to help pull over a speeding 19 year old girl, survive a 90 MPH car crash through a brick wall into another dimension and are pretty sure it's just a really sweet prank Desk Sgt. Juarez set up for a laugh.

The Case For: This movie is literally the Star Trek IV of Barbarian films.

The Case Against: We hate to throw around the word "unrealistic" in a movie that involves barbarians with laser guns traveling through time, but everyone in this movie seems to have amazing psychic powers that tell them exactly where to go to advance the plot at any given moment. 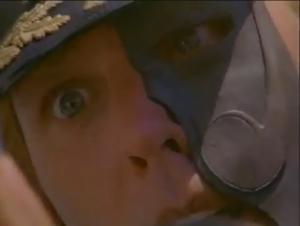 Trillaphon: Please tell me we aren't doing another barbarian movie where the writers somehow think that "barbarian movie" just means "oiled-up retard" or "caveman" or "Tarl Cabot, remedial math professor with magical Ring Pop" jogging around in a thong for 90 minutes.

Hydrogen: No don't worry, this is the kind of Barbarian movie that involves time-traveling to Los Angeles in the early 90s to have zany laser battles with yuppies and sass-mouthed teenagers and Vulcan nerve pinch wannabe punkers with ghetto blasters on the bus while going to Sea World to psychically commune with whales while kidnapping them into space.

Trillaphon: I was about to say "I think you have that last one confused with another movie," but nope - this is seriously just Star Trek IV, with loin cloths and much shittier casting.

Trillaphon: Jesus, they're about one "nuclear wessels" away from a crippling lawsuit. Although given that this movie made 800 grand back from its $6 million budget, Shatner & Co. wouldn't have gotten much more than a rancid unwashed man-thong and a jumbo sack of ferret chow.

Hydrogen: So the good news is that our titular Beastmaster, Dar, checks pretty much all of the barbarian boxes. He's a muscle-bound, axe-wielding nomad, is deathly allergic to shirts, and as a bonus, you can be sure that he smells absolutely terrible from rubbing mangy ferrets all over his manboobs all day long.

Trillaphon: Sounds like the Beastmaster might just be the best/worst movie barbarian we've seen since that one asshole who serially rescue-raped his way to the throne of Nonconsensualhermaphroditistan, a.k.a. Deathstalker.

Hydrogen: There is of course, a massive fucking gulf in plausibility between Spock wandering around '80s San Francisco wearing a headband, and a shirtless bodybuilder roaming the streets with his pet tiger waving a battleaxe and asking where to find Arklon, Lord of Evil.

Trillaphon: Also, these are some of the best IMDB quotes of all time: 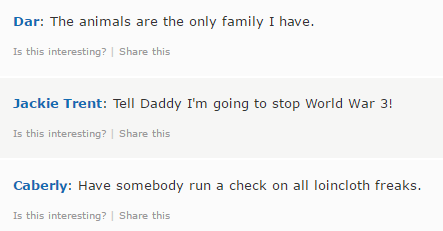