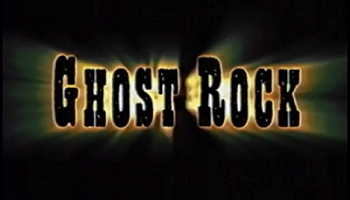 Overview: Some asshole sees High Plains Drifter and decides to rip it off in every way, only this time it's a kung-fu western starring B-movie all-stars Gary Busey, Adrienne Barbeau, and Jeff Fahey. With a hero named John Slaughter.

The Case For: Occasional theme music is a bald-faced ripoff of the theme from Mission Impossible, so with any luck you'll be able to fondly reminisce about that while you're swallowing your tongue from the violent Ghost Rock-induced seizures.

The Case Against: There's more of Jeff Fahey on the cover than in the entire movie, so not even his eyebrows will save you from how terrible the rest of this is. Also, if you thought Equilibrium's "gun-kata" was retarded, just wait until you see some of the moves in here.

This is one of those cases where we just have to start off with the DVD cover: 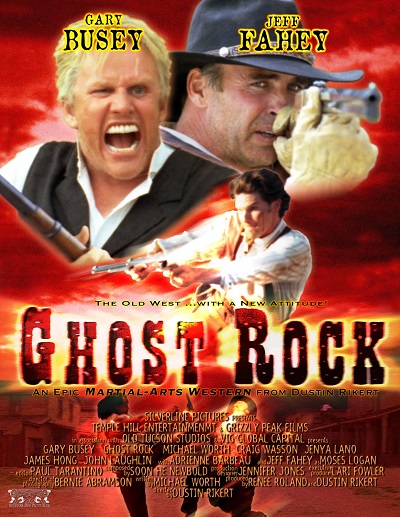 If you can somehow tear your gaze away from Gary Busey's screaming visage and MS Paint-enhanced hair, you will notice some of the other highlights of this visual feast:

Crammed unceremoniously into the middle of this whirlwind of insanity is dual-fisted akimbo blazing face actor Michael Worth, who steps into the shoes of vengeful protagonist John Slaughter. Yes, John Slaughter, the manliest old-westy gunslinger name since Butch Rockaway or Jack "Killshot" Widowmaker: half-Chinese, half-ghost, half-Chinese ghost, and a quarter Chipsahoyo Indian, Johnny kips and tumbles from town to town dressed like a Gregorian Jawa monk, gorging himself on the local scenery and breakaway furniture in search of the outlaws who brutally and melodramatically slow-motion gunned down his dumb-looking family in cold corn starch when he was just a boy.

Well, okay, "search" might be a bit of a stretch, since all of the outlaws have more or less just settled down in the home town Johnny left behind twenty years ago, under the frothing mad leadership of His Mayorship and three-time county yelling champion Gary Busey. The cast of baddies comes in a veritable multicultural rainbow of henchman flavors, such as:

"Barber": aka Last of the Brohicans, master of shirtless akimbo barber razor fighting

"Killin' Jim Jackson": aka Discount Danny Glover, master of not really doing very much but being kind of a dick sometimes

"Pimp Hat Dandy": master of getting shot in the face while trying to lose his virginity in the middle of a gunfight

"Mayor Busey": master of being played by Gary Busey, quoting Shakespeare, telling everybody when he just quoted Shakespeare, and having public meltdowns[2]

[1] To be fair, nobody in this particular town can hit the broad side of a barn at twenty feet with their guns, so the kung-fu makes a certain amount of sense.