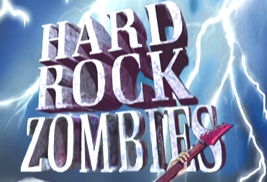 Overview: Murdered rock-n-rollers rise from the grave to battle an elderly Hitler, his werewolf wife, Eva Braun, and their army of zombies. No need for a joke here, folks!

The Case For: It's a movie that revolves around hair metal Nazi zombies. If we stepped back in time to 1998 (or the present-day Fark forums) this would be a really funny premise!

The Case Against: It's a movie that revolves around hair metal Nazi zombies. It is not 1998 and we are not on the Fark forums. The only way this movie could be shittier is if it was a slideshow of Photoshop images featuring Ackbar battling Chuck Norris over a volcano full of robot dinosaurs. Also, it takes itself very seriously.

What do you get when you combine statutory rape, a Third Reich fetish, and an undying love of hair metal? I’m sure most of you readers gave the obvious answer: Kentucky. While this is certainly true, SA reader “Spanky McGee”, who just finished compiling a list of names gayer than his (it’s a short list), sent me an email that made me wonder if there was another answer to my question:

Alright bro, I shit you not, there is this shitty old 80's zombie movie I picked up in the bargain bin at Best Buy that involves not only an undead Hitler, but motherfucking Eva Braun as a werewolf. With knives. That lets midgets watch while having sex with a geriatric fuhrer. This movie is some sort of reich-gasm of ridiculousness.

I would like to make it clear that I have no idea what a “reich-gasm” is. In the future, when I am old and gray and my penis doesn’t work anymore, such a phrase will likely make its way into the American vernacular. Kids at the mall will call the newest robo-Vin Diesel movie “a total reich-gasm.” Pretty young teenagers in Sunny Delight commercials will jump over volcanoes on their hoverboards and land safely in their kitchens, where they will take a drink of the syrupy beverage and declare it “holocaustacular.” McDonald’s will mistakenly label their holo-ads with “I’d Hitler it” and New York cabbies will shout “fuck you right in your Himmler” from the windows of their flying taxis. I can only hope that, when that day comes, I am too busy drooling and shitting my pants to notice the change.

But past that all I pulled up my Netflix queue and a few days later “Hard Rock Zombies” was sitting in my mailbox. I called up some friends, and after convincing them that no, it wasn’t a joke, and that yes, I did have a zombie movie featuring undead Nazi “celebrities”, we had a few drinks and started watching the film.

Well, reader, I’m proud to report that getting hit in the face with a DVD player doesn’t hurt all that bad when you’re so drunk you breathe fire every time you light a cigarette. The glass from a broken TV screen isn’t all that hard to sweep up, and it’s really quite amazing how far up one’s ass a DVD will go when applied with the right force. I just hope my friends can reimburse me for part of the medical bills, since I didn’t make “Hard Rock Zombies” and I sure as hell didn’t ask them to use my head as a tethered soccer ball after I made them watch it. 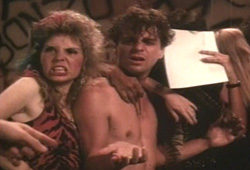 “Hard Rock Zombies” opens normally enough. A a horribly ugly woman with a huge nose lures two men into a lake while some creepy midgets look on gleefully. She drowns them, which for some reason causes gallons of blood to come flying out of the water. Then she cuts their hands off with her cohorts while singing “I Want to Hold Your Hand”. This is as close to comedy as “Hard Rock Zombies” gets.

In the next scene we are introduced to the band that is presumably supposed to put the “hard rock” in “Hard Rock Zombies”. This scene, which was clearly shot in the world’s darkest broom closet, features some mustachioed sissy named Jessy singing “shake it up baby TONIIIIIIGHT” over and over. After this amazing one-song concert, the band leaves the excited crowd and heads towards the dressing room, where they pass time relaxing in their underwear. A little girl who looks likes something my dog vomited up warns them not to go to their next show. Although the girl can’t be any older than 12, Jessie is clearly smitten.

The band, throwing all caution (and any semblance of male dignity) to the wind, dons more eyeliner and gets in their tour van. Nobody’s going to stop their show, even a horribly ugly little girl with caterpillars for eyebrows and a lisp even the haughtiest of SoCal fags would envy.

Most people know there is an art to screenwriting. To create lines that are both believable and efficient is hard, and I understand that. Writer/Director Krishna Shah has attempted to break the stranglehold Hollywood has on creating decent, believable dialogue by having his characters repeat themselves constantly, sometimes midsentence: when Jessie is playing a strange bass line in the back of the van and one of the other bandmates asks where he learned it, Jessie responds with this:

“A book. You know, those things you read? Sometimes you learn from them? A book? A buuuuuuuuuuuuuuk?

He goes on to explain that the buuuuuuuuk in question contained a song from the olden days which people used to raise the dead. This adds an air of historical credibility to the piece, since minstrels often employed the use of an electric bass in an attempt to impress dumpy, acne-scarred maidens in Ye Olde Falloute Boy tunics.

As luck would have it the band picks up the same girl who drowned the guys at the beginning of the movie. Again, repetitive, not to mention contradictory, dialogue happens when Jessie talks with the beautiful young lass (I use “beautiful” assuming most of you are aroused by women who vaguely resemble meerkats):

Please note that I did not make a typo. Jessie asks the exact same question (down to the wording) twice in under five seconds. It’s hard to miss because Meerkat Girl, who does all of her speaking directly through her gargantuan nose, follows the exact same rhythm every fucking line. It goes something like this: Duh duh. Duh duh DUH DUH duh. Duh duh duh.. It’s so predictable and manufactured you could add a couple clapping hands in the background and turn it into a John Mellencamp single. 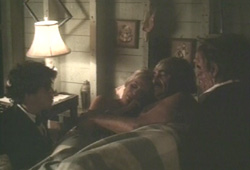 I don't think I mentioned this in the review proper, but check this: In this scene Hitler and Eva Braun decide to let their two midget grandchildren watch them have sex. God damn you, Krishna Shah. God damn you.

Meerkat Girl offers to let the band stay at her house outside of town. They unpack their things and get to doing what they do best: Annoying the piss out of people.

To be completely fair with you guys I’m still not sure what the fuck happens in the next couple minutes of the film. From what I can figure, the band is too poor to buy flyers and thus announce their entrance by running around town bothering people until they get arrested. Here are the facts about the following scene: