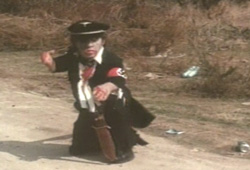 HAHAH A NAZI ZOMBIE MIDGET HAHAH WHAT IF HE WAS A MONKEY SMOKING A JOINT BRAH LLLLLOL
The town has apparently passed a harsh anti-retard statute and thus the police throw the band in jail. Of course, given that this movie was funded by lawn raking money and whatever change Shah could find in his roommate’s dirty laundry, the “jail cell” is really a barn, complete with hay bales in the floor. The ugly little girl comes by and gives them money to bail themselves out. In return Jessie hands her a ring, along with a cassette tape with both the haunted bassline and a new song from the band named “Oh Cassie”. The song is about how Jessie is in love with his homely lady and includes lines like “you’re too young / but that doesn’t keep me from wanting you”.

Hey, I’m from a small town. I think I told this story before but I knew a guy who had to drop out of high school to take care of a kid he had with his cousin. I recently returned to my hometown and saw a woman who had “TANYA GIT ‘ER DONE 420” airbrushed across her sleeveless T-shirt, which had pretty much warped to the point of ripping because of the fat right below her armpits. On a side note, one of the three children she had with her was no older than seven and had a cutoff t-shirt with “brat” written across the front. But no matter what weird shit I’ve seen I refuse to accept a movie that consists almost entirely of undead Nazis and creepy, borderline-pedophilic songs about some grimy dipshit with a pencil-thin moustache wanting to rail a twelve-year-old girl. If the same God that allowed “Hard Rock Zombies” to be made has any compassion in his cold, black heart, he will allow me an audience with the Supreme Court, where I will show the movie as proof that the First Amendment only works when fucking weirdos like Krishna Shah aren’t lurking around waiting to take a dump on it.

Past that point, in the next scene we are introduced to the hidden Nazi villains of the movie. Hitler is an old man who looks a lot like Mario, Eva Braun is a werewolf (with knives, just like Spanky’s email said), and Heinrich Himmler is a lot like that creepy guy who got expelled from high school for approaching girls with a box of Brillo pads and offering “free cooter exams”. They sabotage the band’s first performance (which for some reason is on their back porch, even though the movie never explains their reasoning for setting up a concert in the middle of the forest), and kill the band in short order after that.

The murder scenes are interlaced with footage of Meerkat girl doing some sort of mating dance in the middle of the desert. Nothing adds a touch of class to a film like a musical montage spliced with scenes of a woman dancing. It’s a lot like playing Freebird at a funeral or wearing some socks with those really nice leather sandals you found in a bathroom stall Wal-Mart. In fact, if the woman were dancing on a cliff with a snake while the moon shined down on a wolf howling at a camp of crying Indians, this very well may have could the classiest scene in any movie ever. Werewolf Eva Braun kills two band members, while The Tank gets stabbed in the shower. Jessie himself meets arguably the most embarrassing fate at all when he is pinned to a tree and cut up with a weed whacker by Himmler. Right before he dies he tells Cassie to play the tape he gave her at his graveside.

Shortly after the band’s demise their publicist comes to the old house looking for them. The old man living there rips a mask off and reveals himself to be Hitler (one of the biggest "no shit" moments in the history of film), then proceeds to give a five-minute speech almost entirely in German. This made it really hard to entertain my friends by mocking the movie in various funny voices, including “mumbly but still capable of living on her own old lady” and “silly baby-talking baby.” Since he was speaking in German and not Spanish I couldn’t add an “o” to the end of every word to make fun of it, and let me tell you: that shit sucked. Hitler and Himmler lead the publicist to a secret gas chamber in the desert, which they plan to use to kill all the Americans. This is despite the fact that it’s clearly Shah’s grandpa’s cellar and that there are windows everywhere. The publicist says he won’t join their nefarious dead Nazi society and Himmler carries him off.