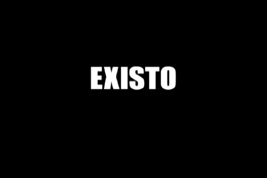 Overview: A bunch of drama class dropouts hate on conservatives for a while. Also, Jim Varney strips nearly nude and covers himself in oatmeal.

The Case For: If you have a picture of a hot naked chick tattooed on the insides of your eyelids you can use all the eye-rolling you'll do at "Existo" as an excuse to rub a few out.

The Case Against: This movie features much of the cast of the old "Ernest" movies and still manages to be worse than any of Ernest's zany Hollywood adventures. That's an accomplishment, folks. 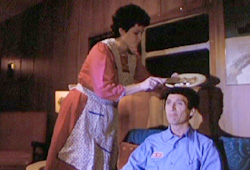 You readers may find this hard to believe, but being an Internet comedy writer isn’t necessarily the most healthy lifestyle a person can choose. Since most of my time is spent drinking diet soda or talking on my cell phone while drinking diet soda, the powers that be have decided to bestow upon a five-day headache so severe I’m sure I’ll find a tumor the size of a softball growing out of my ear in the next couple weeks.

Because of this, instead of spending my time introducing “Existo” through wacky bulleted lists and old people having sex jokes, I’m going to let an IMDB review set things up for me:

Incorrectly described as a "Rocky Horror Picture Show" for the next millennium, this rampage of images and near-Shakespearean wordplay is a dagger through the heart that makes "Rocky Horror" look like a pin prick. This is an amazing example of what truly creative people can do (for an astoundingly small amount of money) when freed of the confines of the Hollywood machine. "Existo" skewers both the bizarr-o radical left and the oh-so-self-righteous right by presenting both as their all too accurate extremes.

First, let me make it clear that I fucking loathe “The Rocky Horror Picture Show” and its fans. If the people who went to midnight showings of that piece of shit saved their facepaint money and bought some acne cream and soap instead, they’d undoubtedly be able to touch some real breasts instead of fondling some dude dressed like Tim Curry in the theater lobby. And while I would love to see a dagger thrust through the heart of anyone who ever sang “Sweet Transvestite” while hurling gloved handfuls of popcorn at a movie screen, I can honestly say the only “pin prick” involved with “Existo” was the minuscule pants tent director Coke Sams popped when he found out he could hire Jim Varney for a couple bags of microwave popcorn and enough WIC vouchers to buy a bottle of Boone’s Farm.

But past that all, beyond the fact that I hate all things “Rocky Horror” with the burning intensity of a thousand suns, I have to say “Existo” made me twice as angry as soon as I saw that IMDB review. Why? Because there are ten more of them just like that in the “reviews” section for the film. And they’re all written by the exact same goddamn person.

This is not an exaggeration. Every single one of those god awful reviews came from one person. Because anyone who would do something like this undoubtedly alternates his days watching reruns of NASCAR time trials and searching for his name on Google, I’d like to address the makers of “Existo” personally here:

When you fill out a form to become a basic member at IMDB you’re asked a for a few simple pieces of information, like the city and state you live in and your email address. When you post something there it gives some of that information to the reader, to let him put a name (or at least a locality) to the review he is reading. I know that you guys filmed “Existo” in Nashville. I also know that, of the eleven reviews on IMDB (all of which were incredibly supportive and positive), eight of them come out of Tennessee.

Since IMDB has not approved my “counter-review," which is just ascii art of a hand giving the middle finger but the finger's actually a penis, I have a few suggestions for you guys. The first is that you each take a Brillo pad and go to town on your genitals until all of your crotches look like they came from a Barbie Doll burn ward. This will ensure that your children will not go on to film another movie like “Existo.” 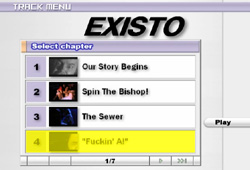 This DVD menu screams class. "Class," of course, is an archaic French word that means "don't watch this fucking shitty movie you idiot."

But outside of false reviews posted by overweight rednecks, “Existo” has its fair share of technical problems. Although it bills itself as an anti-conservative musical, it pretty much fucks up at doing both things by the time the opening credits finish rolling. Please note that my hatred of this film does not stem from any sort of political bias: I remain blissfully ignorant of politics and will continue to do so until the newly elected, reanimated corpse of Stalin kicks my door in and screams a list of Amendments he’s banning into my ear with a megaphone. It’s just that the political humor in this film is so puerile, so utterly trite, that it’s hard to image the screenplay as anything more than a “Not My President” Sams scrawled on the back of his notepad in fifth period history.

The beginning of the film is a good example of this. Instead of taking the easy way out and using some pussy bullshit like “cinematography” or “characterization” to give his us setting, Sams (who also wrote several of the “Ernest” movies,) goes all out and has a voiceover explain the entire movie during the opening credits. The use of this technique really displays Sams’ talent as a director, considering that, in his infancy, his mother often used the soft spot on his head as a makeshift hammer.

The voiceover tells us of a terrible future, where right-wing religious nuts rule the world and all art is banned. George Bush just received a four-year extension on his presidency because of terrorism, and the National Guard is now a privatized corporation owned by GE. The problem is, instead of just, you know, saying this, the movie has to try and be funny about it. And that’s where it fails miserably:

Existo: It has been years since the government forced the surgery upon me...

Existo: ...and since it all happened I’ve been feeling pretty suicidal.

Voiceover: AND HOW ABOUT THOSE CORPORATIONS THEY SURE DO HAVE TOO MUCH MONEY HUH

Repeat until you get an overpowering urge to carpetbomb a quaint locally-owned coffeehouse and you get the general feel of the movie’s first five minutes.

We soon find out that the titular character, Existo (Bruce Arntson), is part of a secret underground movement out to undermine the ultra-conservative government. He spends much of his time in an exclusive club in the sewers of a city, where he and his troupe of drama class dropout retards (including the late Jim Varney and fellow “Ernest” cohort Jackie Welch,) irritate conservative TV personality Dr. Glasscock and his assistant, Roupen, by acting in illegal performance art exhibitions.