I usually leave music criticism to Dr. Thorpe, but I think it’s common knowledge that if a band resorts to wearing costumes on-stage they fucking suck. KISS sucked. The Insane Clown Posse has sucked and will continue to suck until the last little Juggalo inhales too much spraypaint and ends up looking like an oversized blue doormat in his mom’s bathroom closet. Slipknot and their pretentious “alien” protégées Mudvayne won’t contribute a goddamn thing to the music world until their tour plane blows up over the ocean and someone plants a bomb at their remembrance concert. This is why, when Cassie plays the tape at the band’s grave and they rise from the dead in full face paint and even hard hats, I realized the downward spiral “Hard Rock Zombies” took could only logically end in real-life footage of Shah smoking rock cocaine out of a hollowed-out infant.

So given that he’s made a movie full of pedophilia and bizarre Nazi imagery, then made a group of “Zombies” that would be more fitting hosting “KISS Warrior Nation (We’re Not Gay We Promise)” on public access, what does Shah do next? Repeat the last fifteen minutes of the movie in another musical montage. He obviously thinks his viewers are like his chromosome-deficient children and thus have the attention spans of goldfish, so five minutes after we see the band members die we get to see highlights of their deaths all over again, interlaced with footage of the band robot-walking through California. This segues into a second musical montage (around the fifth in the film), where the band murders the entire crew of the house, including the midgets and Hitler, who they kill by playing “Ring Around The Rosie” around him until he dies of boredom.

Although he could have done a little damage control and ended the movie at this point Shah decides to keep trucking on. All the members of the house return from the dead for a reason that’s never explained and start biting members of the town, turning them into zombies as well. The surviving members of what I’ve taken to calling “Operation Gay Nazi Zombie Facepaint Experiment #42 (Super America Ear Bleeding Panty Crazy Girlfriend Edition)” hole themselves up in the town hall while a zombie war takes place outside.

Up next is maybe the strangest thing I’ve ever seen in a movie. The band hops in a van and drives to a venue across town, where a talent scout is waiting to review their work. They robot-walk on stage and perform “Oh Cassie”, playing their instruments totally out of time with the song. Occasionally clips of Jessie decked out in a bitchin white leisure suit and ascot and dancing with his girl appear on screen. Honestly, these scenes should be enough to send Krishna Shah to jail for a long, long time. I suppose being named after a religion of peace doesn’t mean he has to stick to leaflet-handing in airports (hopefully lodged in a plane engine somewhere).

A group of zombies attack the venue and kill the record exec. The ugly little girl, who was secretly watching the show, escapes. 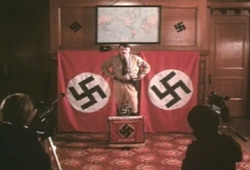 I admit I’ve talked a lot of shit about the musical montages, but Shah does have something different in each of them. For instance, in the following scene, instead of being spliced with clips of Meerkat Girl dancing in the desert, she’s a zombie and she’s dancing in the road. The townspeople somehow think donning gigantic cardboard cutouts of celebrity heads will keep them safe from the zombie onslaught and thus they storm the street, where they are promptly eaten. Before you question the reasoning behind this scene you need to realize you’re watching a movie about a zombie rock band fighting zombie Hitler in a suburban California town. After that you need to kill yourself, since Shah and I are the only two people to have ever seen this movie and I died inside a long, long time ago.

The surviving town members consult an old man, who says the only way to get rid of the zombies is to sacrifice a virgin at midnight in the desert. This, he says, will rid them of the zombie plague for 100 years. They could sacrifice one of their own every century for millennia, since anyone involved with “Hard Rock Zombies” has never had the sexual comfort of anything that they didn’t win at the fair. Hair splitting aside, the townies capture Jessie’s preteen snatch-pie and run for the hills. The band follows.

Given the direction the movie had taken to this point I expected the zombies to pull Cassie’s guts out of her vagina. That would maybe be just enough to redeem the movie, but the band shows up in the nick of time and plays a rousing concert, using the haunted bassline to lure the zombies away. They inch backwards into zombie Hitler’s gas cellar and hit the switch. The bad guys drop to the floor. The band, too, falls victim to the gassing, leaving Shah’s floor covered with the bodies of bad actors instead of the usual assortment of Highlights Magazine and used condoms.

In the final minutes of the film we see Cassie mourning for Jessie again, possibly because he was buried with her E-Z Bake Oven. Jessie’s hand pops up from the grave and offers her a ring. The final shot, a poorly-lit still frame of Cassie nuzzling her dead lover’s hand, goes to prove something about Krishna Shah and his people – Reagan should have pounded Iran into glass when he had the chance.

And as far as that goes, what has Shah done since washing his hands of “Hard Rock Zombies”? According to his IMDB profile, he produced the three “Sleepaway Camp” sequels and some Japanese cartoon called “The Prince of Light”. Anime, Nazi zombies, and references to hair metal? Ladies and gents, I think we have an SA Forums member on our hands here. Just hide the Pocky and you’ll be fine.