This seems to satisfy the Police so they decide to order an ice cream cone from the perverted, psychopathic murderer. He gives them a rocky road cone with, get ready to be grossed out, an EYEBALL in it! Oooh, ewwwww! I haven't been more disgusted my entire life, except maybe when I realized I paid two dollars to rent this terrible movie. These detectives, who are trained to solve crimes and notice things which untrained people would miss, chew on the golfball sized eyeball for a good two minutes and never realize it. Yup, in case you haven't figured it out, this is one of those movies where every adult in the town has the I.Q. of masking tape and the kids are forced to solve even the most obvious and trivial of crimes. Hooray, I love these kinds of movies! 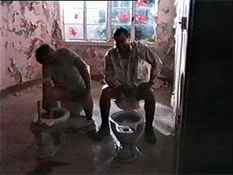 A look behind the scenes at how the script was written.

The town's whore approaches the ice cream truck, and despite the fact that the ice cream man's face looks like God lost a bet, she hits on him. Gee, I wonder if she'll be killed. The ice cream man drives away to a dark alley, where I assume he went to practice not acting, and the nerdy kid from "The Rocketeers" comes and asks for an ice cream cone (I guess the audience should ignore the fact that it was about 1 am). The ice cream man shoves the geek into the freezer and tries to grab the fat one too, but his sheer fatness allows him to escape somehow.

The chubby boy is pursued the next day through a grocery store by the demented ice cream man. He escapes by running into the store manager who is played by Doug Llewelyn (the guy from "People's Court"). He asks the kid "not to sue them." Get it? He was on "People's Court"! And he made a lawsuit reference! Ha ha! Fat people and obvious law jokes are funny!

Once again the Police are called to investigate the ice cream man, who has murdered approximately 41,837 people up to this point, and they respond by hitting his ice-cream making utilities with axes. It looked like a scene from the prohibition era, when Police would raid speakeasies and bash open kegs of bootleg whiskey. Only in this movie, it's not whiskey, it's stainless steel ice cream stirring devices. And the mob doesn't own them, a chubby, ugly, pathetic ice cream man does. And not a single character in the room has more charisma than the buckets they're smashing apart. Despite the ingenious, foolproof, evidence-finding method of breaking things at random, the cops come away empty handed. 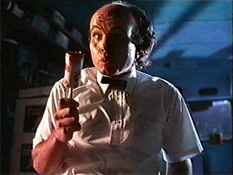 Would you like something short and pale in your mouth?

The cops "figure out" (i.e., they were told by somebody else) that the ice cream man used to live in a mental institute called "The Wishing Well". OH, WHAT A PLOT TWIST! HOW THE HELL DID THEY COME UP WITH SUCH AN INGENIOUS BACKSTORY? The guy from "Airwolf" and the other incompetent cop investigate the institute but are quickly attacked by the inmates, who all learned to walk and move from the zombies in "Resident Evil". The inmates try to kill them which seems to simply annoy the "Airwolf" cop, and he responds by making frustrated faces at them. The mad scientist in charge of the nuthouse screams, "No one escapes from The Wishing Well!" but the cops get away by simply walking to their car. The entire process of escaping seemed to consist solely of finding the exit and walking out of it.

The kids eventually track the ice cream man to his secret headquarters (the place he's lived at for years) and are able to kill him by pushing him into an ice cream mixer. This high tension, dramatic scene is punctuated by a Rocketeer asking, "Who's the Pied Piper now, ice cream dick?" Damn, I bet Shwartzenegger would just kill for a line like that.

The early to mid 1990's provided us with a constant series of "ironic" horror movies. Snowmen, clowns, nuns, dolls, grandmothers, pets, and various inanimate objects all starred in B-grade horror films, knocking off washed up actors left and right. While this might have been amusing at first, it got old real damn quick. Toss in the fact that the movie additionally contains a group of annoying little kids, music that sounds ripped from the GM set of a Casio keyboard, and a plot that was thrown together on a bar napkin late one night, and you've got one steaming lump of video excrement. Do yourself a favor and pass on "The Ice Cream Man".