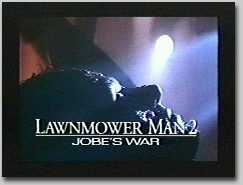 Overview: Jobe is back and he's pissed (and he's not Matt Fahey either). Intent on becoming a floating series of triangles that shoot laser beams at people, Jobe has to be destroyed in Virtual Reality by a bunch of dirty little children who are really smart for their age, at least according to the movie.

The Case For: Comical representations of futuristic "cyberspace", bullshit logic and plot which makes absolutely no sense, MATT FREWER.

The Case Against: Movie uses the prefixes "cyber" and "virtual" enough times to make you wish you were actually watching a better movie such as "Feeders", main characters are a bunch of snotty ass kids, seeing a future that's this idiotic is very depressing for the human race in general. 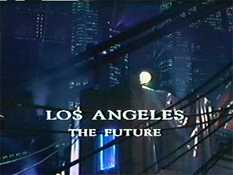 See? I told you it's THE FUTURE.

I've always had a special place in my heart for terrible science fiction movies, somewhere near the undigested remains of all the Slim Jims I've ever eaten. The bad acting, bullshit usage of "futuristic" catchphrases, and crappy special effects almost always ensures I'll be amused by a low budget representation of "the future". "Lawnmower Man 2: Jobe's War" has all of these fantastic qualities and more, yet I walk away from it feeling as if I was covered with a thin film of translucent man sweat. Why does a movie with so much potential to be bad in a good way end up just bad in a... bad way?

The movie starts up by replaying the events that lead to the end of "Lawnmower Man 1". Somehow they were able to cram the entire "building blowing up" sequence into only five minutes. Matt Frewer now plays the role of Jeff Fahey playing the part of Jobe, and Jeff Goldblum is (thankfully) missing from this sequel. Goldblum probably wasn't able to make the film because he's too busy out filming ads or brainstorming new iMac ideas ("Here's a good one, Steve: PASTELS"). If you can't think of who Matt Frewer is offhand, maybe you will remember him from "Max Headroom" or that one current TV show called "Psychic MegaCity Police 2000" or whatever the fuck it is that Dan Aykroid hosts.

Anyway, Jobe is rescued and rehabilitated by the evil forces behind the evil Jonathan Walker's evil project, "Virtual Light". He wants to use Jobe to build a Krylon chip in "virtual reality" so his company can rule "cyberspace" and spy on everybody's personal information. I'm not sure how Dr. Trace got public funding in the first place so he could build his multi-billion dollar research lab, maybe IPOs of the future are even more lucrative than they are now. Or maybe there's a special stock trading section for "evil" companies. 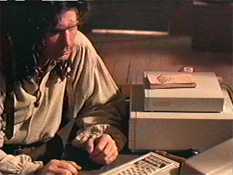 In THE FUTURE, computers are the same size as the ones we have now, only the OS looks more like DOS.

Speaking of the future, it really is the future in this movie! The video relays this information to us by printing "The Future" on the bottom of the screen. Also, the city is really blue and there's lots of smoke - that's how you can tell it's the future! People walk aimlessly across the streets with wires hanging from their eyeglasses, bubble cars jet around at up to six miles an hour, and police officers wear gas masks. Virtual. The noble heroes of the video, a group of homeless kids who live in an abandoned subway car with approximately $600,000 of electronics, are "jacking into cyberspace" for a little recreational fun. Apparently, in cyberspace, you can do anything you want. ANYTHING. So what do these dirty little sewer urchins decide to do? Fly over some bushes. Yup, they load up the "Virtual Idiocy" disk and hover over a forest for a few minutes. Because it's in the FUTURE and all.

Jobe breaks up this little moron party and asks the head cyber-virtual-haX0r, Peter, to help him find Dr. Benjamin Trace so "the cyberscape doesn't die", whatever that means. Dr. Trace invented the wonderful Krylon chip (and I mean "chip" as in singular. There was only one damn chip made) and Jobe needs to know about an instruction set named "Egypt" so some vaguely bad event doesn't happen to virtual reality. Or something. It doesn't make too much sense. Maybe if I use the words "virtual" and "cyber" a lot, everybody out there will disregard this.