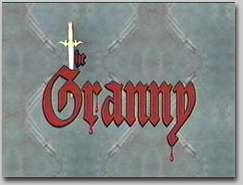 Overview: A bitter grandmother rises from the grave to kill her obnoxious family. Uh... that's all.

The Case Against: Annoying one-dimensional cast, dialogue that make you want to vomit blood, plot was apparently written on a straw wrapper during a night of binge drinking. 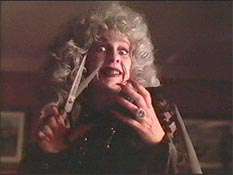 Yes, Granny, cut. Cut 68 minutes of film out of this video, please.

"Jeeeeed! Jeeeeeeeeeeeed!" Ah, the images of a withered old woman shouting for her half-wit son carry me through many a sleepless night. Following in the footsteps of the wonderfully mediocre "Ice Cream Man", "The Granny" shows us that even the most innocent and traditionally good-natured people can become brutal, psychopathic killing machines with no acting talent. All they need is a bottle of magical, evil elixir that causes them to be possessed by the devil, just like that one other movie where that guy drank the magical, evil elixir and became possessed by the devil. You know the one I'm talking about (note from editor: nobody really knows what he's talking about).

Our journey into Satanic senility begins in the mid-1600's, where a family is desperately trying to exorcise a daemon that has possessed their daughter. They attempt to do this by crying, screaming, and getting thrown up on. This doesn't seem to be that effective, so a magical priest shows up and tries to help the girl by whining alot and using "logic" to dispell the devil from her. The daemon, pulling one of the oldest tricks in the book (and I don't even know what the book is), transforms into a pretty girl and comes on to the priest. In a completely idiotic display that suggests men are nothing but walking penises, the priest goes to kiss her and is immediately killed. This supports my theory that "All men are idiots. Well, just the ones that agree to star in 'The Granny'." 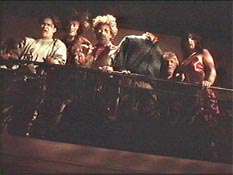 It's hard to believe that before they were zombies, these people were even more repulsive.

Cut to the present. A decrepit old hag is rotting in bed, shoving experimental medication down her withered maw to extend her worthless life even longer. She begins to bitch to her granddaughter about how evil and weasly her family is. According to the corpse-to-be, the rest of the family wants her to hurry up and die so they can inherit her vast wealth, which seems to be solely invested in drapes and end tables. Granny is preparing for the entire family to come over for Thanksgiving dinner because its the one time the whole family can get together, outside of highway rest stops at least. True enough, the rest of her family turns out to be a bunch of jerks. Here's a quick rundown of the people attending dinner:

White, middle-aged guy #1: Self absorbed jerk
White, somewhat old guy #1: Egotistical prick
White, young woman #1: Conceited bitch
White, young woman #2: Asshole who's infatuated with herself
Random other people who may or may not be related to the family but showed up because the director didn't have enough money to pay for his dry-cleaning and promised to put them in his movie as payback: They're jerks too.

They all pretend to care about Granny and ask bullshit questions about her health and stuff. She responds by cursing at them and throwing things, which is usually the same thing I do when people ask me how I'm doing. When she's not looking, somebody empties a vial of poison into her soup. It doesn't turn out to be the most effective poison in the history of the world, as once it hits the soup, the poison starts bubbling and fizzing all over the place like rabid Alka Seltzer. This is probably because assassins are sick and tired of having to use poisons that are undetectable to the human eye. The "cool" killer these days wants something that everybody can tell is poison, as if to say "That's right, bitch, I put poison in your Quaker Oats. And I'm so damn cool that I don't even care if you know about it." Then the assassin would try to snipe at the president with an elephant gun.