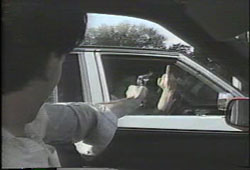 In this scene, which I somehow forgot to mention in the review, Sam shoots a man's middle finger off after the man drives beside him and flips him the bird. The lesson? Don't annoy retards. The "beautiful" ladies are holding a baby shower for a pregnant coworker (billed in the credits as “pregnant woman”), who lost all her clothing in a freak hair-teasing accident and is forced to wear nothing but an oversized yellow shirt all the time. Outside of the apartment, Sam has a brilliant plan to drop to all fours and peer around the side of the building in broad daylight. He is nearly busted by everyone’s favorite “Paperboy” villain, large, angry man carrying a shovel, who stops his eternal trek back and forth across the street to ask just what the hell is going on. Sam pulls the classic “I lost my contact” shtick, then discovers the man’s weakness: his head has the structural integrity of a marshmallow. He takes advantage of the flaw by gingerly tapping the man’s face with the shovel. His head, obviously not designed to the punishing ounces of pressure, caves in.

Back inside the girls are having a grand old time. After putting on bikinis so “[they] can eat pizza” (presumably so they can stand over the pie and shake their crab-infested crotches like disease-ridden peppercorn grinders), they decide to drink a few beers. Well, all of them but pregnant girl, who offers the most circular goddamn excuse I’ve ever heard for anything: “I can’t have any beer yet so I can’t drink any”. Using this logic it’s pretty much impossible to lose an argument. For instance, you could say something like “you are a jerk because you’re a jerk” or “your honor, I didn’t track down the director of ‘Las Vegas Blood Bath’ and gouge his eyes out with my rage-engorged penis because I didn’t do it”. Then again, another fitting answer to the second statement would be “because someone else beat me to it”, but that doesn’t have the same ring to it.

After the pizza (which was delivered in a folded cardboard box by none other than Captain Caveman) the girls watch a televised oil wrestling event, held in a parking garage. As it ends Sam bursts into the living room, promising “not to hurt them if they just shut up” before they have a chance to respond to his entrance. Say what you want about Sam but that motherfucker is prepared, telling bitches to shut up before they even start talking and shit. He then proceeds to tie the girls up, inspiring a spectacular range of emotions spanning everything from severe boredom to gut-crawling ugliness. One girl is so terrified she forgets she’s scared and actually chuckles for a second, then looks offscreen and instantly sobers up. We can only assume one of the stagehands was standing behind the camera, hold up a picture of what she might look like in ten years.

There comes a time in every movie where things could be vastly improved by a pregnant woman being butchered. Nobody likes a pregnant woman. Say a dude comes up to you with 50 bucks in one hand and this woman at his side. He gives you a choice: you can take the money or roundhouse kick the woman in the stomach, sparing the world yet another Wendy’s night manager named “Austin” who almost didn’t get promoted because of the “LiMp BiZkIt” tattoo on his trackmarked forearm. Which do you choose? The fifty bucks? Hell no. You can make that easy, for instance by raiding the woman’s trailer after you dropkick that vat of babies and cheap vodka she calls her stomach. You kick the pregnant woman in the stomach or you’re a fucking pussy and probably a feminist at that. This country didn’t get to where it is today by fostering a bunch of goddamn ninnies who take money over the chance to turn a woman’s twat into a high-power baby hose.

Luckily, Sam is no feminist pussy faggot. He knows the real place for unwanted kids is in a hospital micro-vac, or short of that splattered all over a sheet-covered apartment wall. He unties pregnant girl and leads her upstairs. After an amazing conversation in which Sam sputters the word “Paris” more than 40 times in one minute, he admits that his wife was pregnant when he killed her. The pregnant girl, who by this point is tied to the bed, brilliantly decides to tell him “he’s sick” even as he’s holding a knife to her swollen, discolored gut.

Though I’d love to show you what happens next in all its glory I feel some duty to you guys reading this from work. As such, DO NOT CLICK ON THIS LINK IF YOU ARE NEAR ANYTHING REMOTELY RESEMBLING A "JOB," EVEN IF YOU’RE JUST AT YOUR RICH AUNT’S HOUSE GETTING READY TO MOW THE LAWN OR SOMETHING!!!

It saddens me to say that the rest of “Las Vegas Blood Bath” fails to live up to the makeshift abortion scene. It’s like crawling through a hallway covered in rat traps, nailing a supermodel halfway through, and then realizing the remainder of the path is covered in dirty diapers and rusty thumbtacks. It’s like being forced to eat a footlong sub made of cow dung and finding a delicious rare truffle midway through the meal. Watching “Las Vegas Blood Bath” for the abortion scene alone is every bit as bad as hearing a husky voice say “come in, baby” from your bedroom and walking in to find your grandmother pleasuring herself with your favorite shirt. That’s right, ladies and gents: It’s worse than seeing your grandmother play with herself. I don’t know how many things you can say that about but I’m sure it’s a pretty fucking short list. Fortunately, the makers of the movie realized this and thus eliminated the remaining girls in short order:

With the girls gone Sam’s riding on easy street. He’s managed to kill around twenty people in an hour’s worth of film, a pretty big accomplishment, especially when you consider the “plot” part of the movie wrapped up about ten minutes after the opening title. Although you’d think he would rest after ending more lives than the Kennedy family and all their vehicles combined, his work is not over. Shortly after he kills the last girl a Jehovah's Witness sticks his head in the door. We know he’s with that particular insane cult because he pops in and shouts “JEHOOOVAAAA’S WITNESS” like he’s announcing a bible-thumping pro wrestler who doesn’t believe in holidays. Sam karate kicks the door, decapitating the missionary with a surgical precision only a processed piece of wood can produce. He offers these words of wisdom before heading up the stairs for a well-deserved bath. 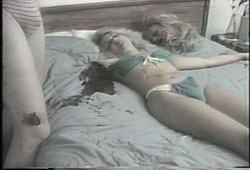 There 's something wrong with this picture. HINT: It's Sam's erection pointing at the mutilated women on the bed. To me, there is nothing funnier than a grown adult trying to be a cop and failing. Every time I see some fresh-out-of-the-reserves store cop at the mall it takes every ounce of restraint I have not to point at him and shout “HEY LOOK AT THE FAGGOT” while encouraging children to throw rocks and used condoms at him. If one good thing spurred from 9/11 it was the sudden uprising in pride over what amount to clerical jobs. Suddenly ambulance drivers and police dispatchers went from being undereducated, underpaid white trash lawn mower jockeys to something respectable... for about a day. After that people returned to form One day, people will realize there’s no need for an acne-ridden woman in thick glasses and flip-flops to handle police phones. They’ll realize any retard with motor skills and a set of keys can drive an ambulance reeeeaaallll fast through red lights. Shows like “National Blue Collar Circlejerk 16: It’s Still Funny We Promise” will go off the air, and the dispatchers and drivers of the world will start serving a higher purpose – fertilizing graveyards. It’s hard to be smug about unskilled labor when maggots are fucking in your eyesockets.

This is why the final five minutes of “Las Vegas Blood Bath” almost make up for the previous 55. A “cop” (presumably called in when the one girl requested “a police” earlier in the movie) dressed in a tank top and blue jeans, as well as an awesome dragon tattoo, shuffles around the house like an epileptic looking for his last dose of medicine. He belly-crawls down the hallway for no discernible reason, takes over four minutes to open a door and look through it, then finally finds Sam relaxing in the bathtub.

Say what you want about “Las Vegas Blood Bath”, but the title is spot-fucking-on. After finding pregnant woman’s baby stuck in the toilet, the cop finds Sam relaxing in... well. a bathtub full of blood. And body parts. The cop, taking a cue from Sam’s ability to shut people up before they start talking, orders Sam to put his hands in the air even though he’s already holding them up. Or so we think. The cop lets his guard down and Sam’s real arms emerge from the bile holding a gun. He shoots the cop and then removes the fake arms he was wearing.

And so ends the story of “Las Vegas Blood Bath”. The camera freezes on Sam’s laughing face and the movie’s theme song plays, thus eliminating any question that every person involved with the making of this movie is criminally insane. If you’ve ever wanted to hear a seventies-style jug-band-meets-funk song about a Jewish serial killer and his wife’s decapitated head, here’s pretty much your only chance. Really if there was more than one chance to hear something like that I’d probably wish I was the baby Sam splattered all over the wall. Like mom always said, if you’re not part of the umbilical hammer throw, you’re part of the problem.