In Space No One Can Hear the Music Die

In the days before all musicians were rappers, and all rappers were obligated to appear in low-budget thuglyfe movies, musicians seemed to be drawn inexorably to acting in science fiction movies. Maybe they thought the special effects and explosions would cover for their inability to act or maybe they just wanted another paycheck. Whatever their reasoning, there is a curiously proud tradition of musical non-actors appearing in major science fiction movies.

Most of them can't act, their appearance in a movie is disruptive, and their inclusion was almost always a bad idea, so let's go ahead and celebrate them. Sounds like a great excuse for a count-down to me! 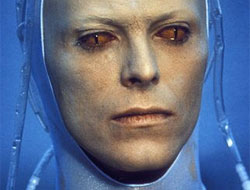 In 1976's The Man Who Fell to Earth, David Bowie reprised the role he pioneered in 1972 as a pansexual alien from outer space named David Bowie. The film's plot is something about an alien (Bowie) landing on earth to take water back to his home planet and in the process becoming an alcoholic sex-obsessed snake-eyed Ken doll multimillionaire that sits around and watches TV all day.

Bowie's only real friend in the movie is played by Rip Torn as a sort of swinging rocket scientist. Torn has graphic sex with several women in a montage. Supposedly, he really had sex with the women. These days, production companies will leak "real sex scenes" to generate buzz. Somehow I doubt that was the case with Rip Torn.

Copious nudity and sex aside, the movie is plodding and bizarre. It's the sort of movie you might take your girlfriend to if you wanted to break up with her afterwards. Bowie is passable because he is playing a slight variation on the same character he played each night when he took the stage as Ziggy Stardust. It's also hard to notice shitty acting when the script calls for scenes in which characters do nothing other than stand or sit around and stare at things.

Despite a modest cult following, The Man Who Fell to Earth is intolerable postmodernist horseplops. Blah, blah, blah mankind's excesses, blah blah blah, non-stop sex and a rock star. We get it. It's The Wall with Rip Torn fucking things. Beam them all back to their frigging planet. 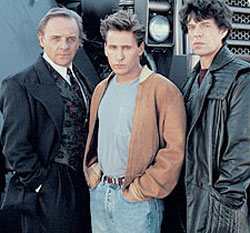 In the category of, "What the fuck is going on here!?" we have 1992's cyberpunk action thriller Freejack. Emilio Estevez and Rene Russo. "Okay," you're thinking, "not great but that's a decent start for the cast of an early 90s b-movie." Then, out of nowhere, you get the one-two punch of Anthony Hopkins and Mick Jagger.

Not content to just feature "brain swapping" as the plot, the movie also dabbles in time travel, Matrix-like realities, computer intelligence, and car chases. Estevez plays a race car driver who gets brought to the future seconds before a fatal car crash so Anthony Hopkins can implant his consciousness in him so that Rene Russo will fall in love with him. Whatever, I don't know, the point is Estevez escapes before Hopkins can overwrite his C-drive, giving the writers an excuse to have him get chased for about an hour.

Mick Jagger plays Victor Vacendak, the man hired to track down Estevez and bring him back. Jagger is embarrassing any time he speaks. Sometimes he sounds like he is trying to conceal his British accent, sometimes he sounds drunk, most of the time he sounds like a crossdresser trying to pass as a Southern belle. Adding to the indignity of his ridiculous role, he has a fascist posse of guys in silly body armor (they look like Spaceballs) driving around cars that seem to be scaled-up bumper cars. He even has pastel-colored APCs at his evil disposal.

I hate to spoil this for you guys, but at the end, after chasing them for most of the movie, Mick Jagger ends up helping Estevez (and Russo) escape. He has a friendly laugh with them about that. Jagger seems half-asleep or bored as he waves them off into the sunset.

I could say a lot more about how terrible Jagger is and how terrible Freejack is, but instead I will just let you watch this video clip:

I couldn't have said it any better.

With 1984's Runaway, prescient author and director Michael Crichton envisioned a science fiction world in which Magnum PI would don a suit of chain mail to fight a robot created by the lead singer of Kiss. Playing opposite Tom Selleck, Kiss front man Gene Simmons dropped the clown paint and assumed the role of Dr. Charles Luther.

Simmons is a super genius who designs and programs robots to kill people. Tom Selleck hunts down rogue droids like a budget version of a Blade Runner.

Simmons was not given many lines and he sleazes them out like a hairy lizard. He seems to enjoy killing people with his dorky robots and his heat-seeking bullets, but I have a feeling the real Gene Simmons wouldn't mind doing these things.

The movie holds up pretty well, mostly because it remained modest with its vision of the future. My favorite robot in the movie is probably Selleck's family robot. It's the sort of clumsy-yet-omnipotent droid that you thought went out of style in the 1950s. Be prepared, though, because Gene Simmons tries to turn it into a killer of children.