Sequels are a special kind of thing, aren't they? When you get a sequel, you can start with the original idea and take it anywhere! Usually, though, the people who have the sequel like to take the original idea absolutely nowhere and simply produce the same movie again. This has certainly proven to be the case with the mediocre sequels we have this week: The Hangover Part II and Kung Fu Panda. Meanwhile, Martin R. "Vargo" Schneider decided it would be a good idea to delve into the bowels of Netflix Instant and let you sadistic readers decide what he should watch. As a punishment for this, he had to watch a film called MILF, which is pretty self-explanatory.

EXPECTATIONS: I haven't seen The Hangover and yet I need to watch and review its sequel today? Uh oh! I'd better find out all I can about the first film from as many sources as possible. Some tell me I need to have seen the first in order to appreciate the sequel, that's useless information! I'll be the judge of that, thank you very much. Others tell me that The Hangover is quite simply the funniest film ever made. Yet others tell me it is simply a series of events that includes Mike Tyson and a tiger. Either way, I'm going to have to plunge into this pool of madness head first... 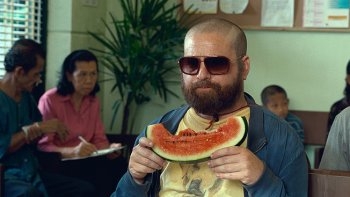 I'm eating watermelon! Isn't that hilariously odd of me?REALITY: ... I awake, numb and disoriented on the cinema floor. My face is bonded so tightly to the combination of spilled sugary drinks and semen stains that I am forced to tear off my three-day stubble in order to free myself. That's strange, I could have sworn I shaved before I came out. Where are my shoes? What happened here? What the hell did I just watch?

Judging by the queues I had to wait in for this thing, everyone in town has already seen this film. The Hangover being the natural favourite of students and the unemployed, I started by hanging around outside the job centre. "Oi, mate!" I called to a paisley-clad gentleman across the way.

"You fucking what, dickhead?" was his genial response.

"Have you seen Hangover 2 yet?"

"Yeah, our lass's dad got us it on copy. It's fucking class, mate!"

"What happens in it?"

"They go to Thailand and get proper fucking razzed. Then they can't remember owt the next day so they go bombing about the place trying to figure shit out," the man explained, the odour of cheap deodorant and fags wafting at me as he spoke.

Leaning against things for hours. This is the most realistic depiction of hangovers to date.

Of course! It's coming back to me now. The so-called Wolf Pack -- Phil (Bradley Cooper), Stu (Ed Helms) and Alan (Zach Galifianakis) -- is in Thailand for Stu's wedding. The festivities begin after "just one drink" at the beach. They wake up the next morning in a dingy hotel in Bangkok, completely unaware of what happened the night before. They begin their adventure, seeking the truth about a previous adventure, running around Thailand piecing together their antics from the night before. The problem with this scenario is that the punchlines all come first and then lead into setup. The sensible guy got a tattoo, haha! The guy with crazy hair got his head shaved, heehee! They stole a gay monkey, hoho! The film then goes on to explain how all these hilarious instances came about and the truth, it must be said, is not as interesting as the mystery.

In fact, the first act spends so much time alluding to the first film that I was glad I had never seen it. I wish formulaic sequels like this were actually for films that never existed, because picking this up as you go along seems more fun than understanding every vague reference to Stu's teeth or roofies in orange juice until it pays off. Otherwise, I could imagine myself wondering why the hell they were so obviously recycling jokes by referencing the last time they did them as the setup and then doing them again as the punchline. Hurr, he thinks something is wrong with his teeth because last time something was wrong with his teeth but he actually has a tattoo! Ha fucking ha!

This week's animal is a monkey. Tune in next time when the Wolf Pack adopt an actual pack of wolves.Unfortunately, as all of this came rushing back to me, the helpful fellow who had spurred my memory had long gone, so I had to rely on my own deeply concealed subconscious. In order to unearth the memories I must return to the scene of the crime and ask the cinema staff just what the hell happened.

Well, it seems that my loss of consciousness and my loss of shoes were directly related, insofar as my shoes were stolen sometime after I fell unconscious. However, this does not help me in my quest for the truth. Luckily the staff was also willing to fill me in some of the events of The Hangover Part II. Turns out the Wolf Pack lose track of Stu's future brother-in-law and have to hunt him down by retracing their steps. This is the main thrust of the action in the film, but the resolution is so unsatisfying and unoriginal that you'll wonder why they ever bothered writing it in at all.

Now I guess I'd better make my way back to my car and drive home in my socks and ... wait a minute! That chav at the job centre was wearing my bloody shoes! That last minute realisation reminds me of something. The Hangover Part II isn't actually worth remembering. No wonder I fell asleep for three days, this damn thing is as formulaic and bland as you can get. A carbon copy of its predecessor and proud of it, The Hangover Part II offers absolutely nothing new in the field of storytelling or comedy. Sure, there are some laughs to be found here, but who cares? It's a film that everyone on Earth has already decided is the funniest film ever made, because The Hangover has become the barometer against which lazy critics will always gauge new comedy. By that standard, surely the sequel will be the second coming of comedy Christ?

MINORITY REPORT: I can think of no better way to observe Memorial Day weekend than by seeing a movie about going to another country and freaking out because it's different from America. Our fallen soldiers would be so proud. - Joseph "Jay Dub" Wade