If you’ve noticed a lack of summary so far I would like to apologize. It’s just that “Metalheads” is not a movie so much as a bunch of images and sounds thrown together for about two hours. I’m not sure if there was supposed to be some sort of string running through these images and sounds, but if there was it’s gone now and I can only hope it’s wrapped around Zebub’s neck (I wonder how “metal” it is to kick a chair out from under yourself and notice how your hair can touch the ground even if your feet can’t). I ain’t kidding here, folks: you could watch the movie’s scenes in any order you pleased and it would make the same amount of sense (read: none) with each progressive viewing. Again, this is not surprising coming from a man whose credits include “Jesus Christ: Serial Rapist” and “Assmonster”, but when someone can accurately compare your movie to a jigsaw puzzle made of dog excrement and razor wire you might want to consider dropping the camera, preferably the next time you’re holding it in a bathtub.

After the “skeleton running through the graveyard” scene, which has nothing to do with the movie (along with being a writer, director, and actor Zebub is an aspiring CGI artist – I don’t think we’re going to see much of his work in mainstream film unless his mother’s fridge ends up in a Spielberg movie), we’re introduced to the movie’s three main characters, none of which have names. While this might bug other moviegoers I had no problem calling them Ugly Slut, Mr. Welfare, and Bill Zebub. I wonder if you guys can figure out which is the biggest insult.

Once they’re introduced the characters graciously give way to the movie’s focal point: videos of an aging woman stripteasing to Cradle of Filth. Honestly, I didn’t think there could be anything worse than listening to Cradle of Filth or watching a walking yeast infection try to convince people she’s still as pretty as she was when she could get away with charging $10 a footjob, but you combine the two and I swear your television will reek of Summer’s Eve and Boone’s Farm for weeks. I really don’t know the logistics of using Febreze to scrub the stink of an aging snatch off a television, but I’m getting tired of my living room smelling like a pile of nursing home panties because of this goddamn movie. 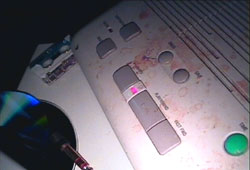 Ok, I know the movie sucks and all, but serious question: how the hell could an answering machine get that dirty?

The problem is that Zebub can’t come clean and say “yep, I couldn’t get a pretty girl to kick me in the nuts if she was wearing a radiation suit”. Instead, he spends most of the movie trying to convince us these women are attractive. If I can speak to Zebub personally here: Telling the audience a woman is pretty is not enough to make her, you know, attractive, even in that “maybe if I was really drunk and she had a totally different body and face” sense. The only way I would ever think one of “The Girls of Zebub”, as you so pretentiously call them, were worth my time is if you lined them up on a freeeway and had a monster truck smash their heads like drunken, uneducated grapes.

This doesn’t stop him from trying, however. After a scene where Zebub visits a pizza place, orders his food, then leaves before he eats, we see his friend laying on a bed and going to town. Please note that I don’t mean this in a literal sense – while I’m sure the dude does spend a lot of time in town (likely in a gas station parking lot, where he offers to buy seventh-grade girls liquor if they’ll pull their Spongebob shirts up and let him get an eyeful of A-cup), he is actually masturbating. People in the biz like to call that a “euphemism”. This is not to be confused with “euthanasia”, something that would have served the cast and crew of “Metalheads” very well.

The only thing wrong with this scene is that Zebub, who has expressed frustration with the “pants first, then shoes” theory, doesn’t understand how shadows work. Although the actor does do a great job portraying a long-haired mongoloid smacking his meat to a poor set of leggings, straining to contain a bulging set of thighs, the silhouette behind him clearly shows that his penis is nowhere to be found. I never thought I’d argue that a movie needed more dicks, but honestly I could watch an engorged prick bob up and down to “The Saints Come Marching In” for two hours and ultimately feel more satisfied and less disgusted.

At this point you might be surprised to hear that the movie actually manages to get worse. I know Zebub is the least talented man on the planet, but I want you to think about this: he managed to outdo a scene in which an aging woman pleasures herself through a pair of too-tight lace panties. If that doesn’t deserve a trophy, I don’t know what does – preferably one that weighs about seven grains and fits nicely in the middle of his unkempt unibrow.

I like to call the scene in question “Ugly Slut Takes Acid”. I’d like to say that in that scene our ghastly young heroine picks up a bottle with a skull and crossbones on it, chugs it, and spends the rest of the movie vomiting her guts all over her bedroom. Unfortunately, the acid in question is hallucinogenic, not hydrochloric, and thus she flies to a world populated by golden sharks, half-modeled skeletons with polygons sticking out of their shoulders, and bright red pirate ships. I hate to argue about the accuracy of this trip, since Zebub clearly ingested a number of hard drugs before he slipped out of his mother’s warty furpie and into the shit-ringed she called her toilet, but I’m pretty sure LSD doesn’t instantly transport you to some kind of faggot pirate world where the only boundary is how many peg-legs you can hide in your ass. Then again, we are talking about a guy who almost quit writing and making movies because he got addicted to an Xbox game so we’re clearly not dealing dealing with the brightest community college dropout in the state pen.

When she makes it outside it is miraculously daytime, she has a whole new outfit on, and Zebub’s friend is waiting at his car, laughing. Why, you might be asking? Not because his whole life is a joke and his mere existence is enough to make pedophiles and serial rapists feel better about themselves, but because everyone’s favorite skank has several CGI bubbles sprouting from the lice farm on top of her head. I’m really glad technology has advanced so far that we can accurately portray “this woman just took a shower” with the assistance of computers – when you spend your water bill on hunting videos and discount liquor it’s be hard to make someone look wet without CGI.