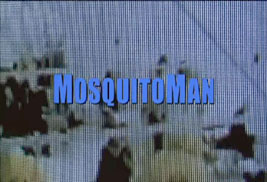 The Case For: Sometimes you snap out of the stupor the movie puts you in because you’re thirsty, and then you get a drink of water. I guess that’s good if you like water or something.

The Case Against: There’s something seriously wrong with a director if he can’t make a movie about a half-mosquito-half-man at least kind of interesting. 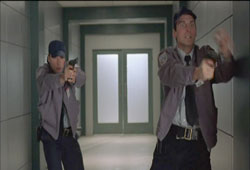 "One day I'll learn how to fasten this belt, and then you'll be fucked!"

There is a time in every man’s life where he begins to wonder what his work has accomplished. Painters have put their best work on canvas because of the pressure this feeling causes. Musicians have created songs that define entire generations. Certain great films have spawned entire genres because of their effectiveness, all due to this constant artistic self-evaluation.

If age has spurred so many great works, “MosquitoMan” (which can also be found under other names, including "Mansqito" and "That giant piece of shit starring Parker Lewis") is the artistic equivalent of a 45-year-old middle management jockey buying a Ferrari, getting drunk, and wrapping his new car around a tree with his kids in the passenger seat.

Although “MosquitoMan” features a half-man-half-mosquito as its antagonist, it is not a horror movie. It is a detective movie that happens to feature a deformed mosquito-person as its villain. In all honesty there is no reason for the mosquito-person to exist, since his being a mosquito really does not affect how the plot progresses. I can only imagine the board meetings that went on over at First Look Entertainment, the company behind this masterpiece:

Executive: Gentlemen, it has come to my attention that we are to produce yet another straight-to-video detective action movie. The last ten have flopped, but I think I have an idea that will turn this company around.

Board member one: What is it, sir?

Executive: Okay, the killer will be part of a medical experiment gone wrong, right? He’ll be exposed to some sort of radioactive bug juice and, get this, he will inherit some of the bug’s powers. Then he’ll kill people.

Board member one: Hey, I bought us some crack rocks to smoke but I’m pretty sure they’re just peanuts dipped in powdered sugar. 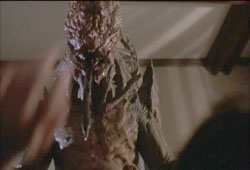 Like this shot? Good, because you're going to see it about twenty more times by the end of the movie.

“MosquitoMan” fails on every level a film possibly can. Obviously a movie that could be described as “The Fly, only it’s a detective movie about a mosquito” can’t aspire for much in the first place, but “MosquitoMan” is one of those movies that takes itself so seriously it can’t even be considered a B-movie.

Let’s start with the dialogue. I’m pretty sure “MosquitoMan” was written by an autistic child who had never heard another human speak outside of tense exchanges in terrible action movies. The interplay between characters is so bad I am almost inclined to believe it is actually an intricate joke between the director and screenwriter to see who can write the worst line and get it on screen.

For example, let’s look towards the end of the movie, where our hero Thomas Randall has stolen a grenade launcher from the back of a swat van. When he spots the monster, he cocks the weapon, holds it out, and then delivers a line that sums up the movie as a whole:

“Hey, mansquito! Look at this!”

I can only imagine how people in the “MosquitoMan” universe discuss mundane things.

While eating breakfast: “Toast, you’ve bread your last set of problems for this house!”

While talking about last night’s football game at the watercooler: “It was just a game, a game like any other. Little did I know losing ten bucks in the office pool would turn my life on its side.”

While getting an oil change: “Listen, mechanic. I have a wife and kids out there somewhere in suburbia. If I don’t get the groceries and get home by seven, the shit’s really going to hit the fan, and I will hold you personally responsible. What I need to know is this: Can you change this oil in a half hour or will I have to make you drink a few quarts before you see things my way?” 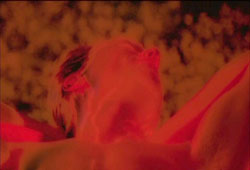 Apparently the powers of a mosquito include "seeing in red" and "occasionally seeing in orange."

The characters in the film are the cinematic equivalents of slightly agitated cans of cat food. They are given no back story, zero development, and besides being stalked by a gigantic manbug, they don’t have any real reason to exist within the film.

The protagonist, Thomas Randall, is the best example of this. Let me explain something: In every other hackneyed detective movie the cop in question has to have some character flaw. Drinking. Gambling. Pain pills. Not so in “Mosquitoman.” Instead, Randall is just boring. So boring you can’t hate him like most characters in bad movies. People in line at the bank are infinitely more gripping and interesting than Thomas Randall.