Intimidation One, submitted by Reichsfuehrer Uterus. Neo-nazi skinhead music has always been a hotbed of innovation. You don't hear songs with lyrics praising Luftwaffe aces with "heil" and shouts of "Oi, Oi, Oi" on the stagnant billboard charts. Groups like Intimidation One are down there in the trenches forging their white rage into a musical dagger, Jesus I can't even fucking pretend to like this. I don't care if you're a white power shitball or not, how the hell can you enjoy this? It's like the worst punk on the planet distilled into repetitive chants praising German war "heroes" who may or may not have even actually been Nazi party members. They also have very similar songs praising more recent Nazi "heroes" who probably died being shot by cops while trying to snipe black people.

Another key part of white pride is apparently using HTML tags to resize JPEGS down from 1280x1024. Oi, Oi, Oi! 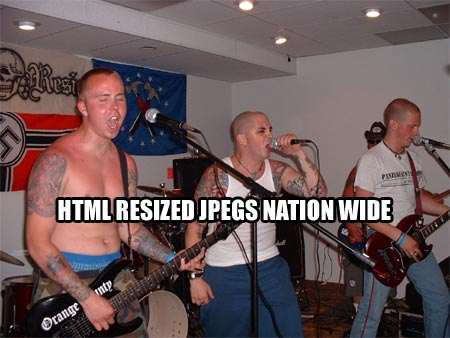 Welcome to the Intimidation One website. Intimidation One is named after Oregon's anti-White "Hate Crimes" law which makes White Self-defense a crime. We are a pro-White Oi! band dedicated to fighting Red Front and Mass Reaction through nationalist and Racialist music.

Oi, Oi, Oi Vey. Particularly hilarious are their album covers which bring new meaning to the word "amateurish" and go a long way in explaining at least one reason why Neo-Nazis are not exactly a recruiting powerhouse. White Power has a new face in America! 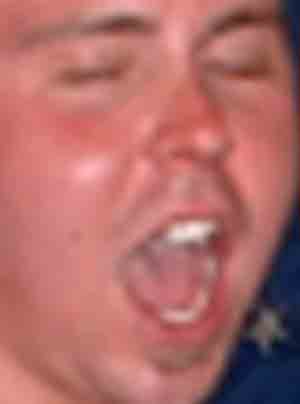 Be sure to check out their hilarious guestbook and add some thoughts of your own!