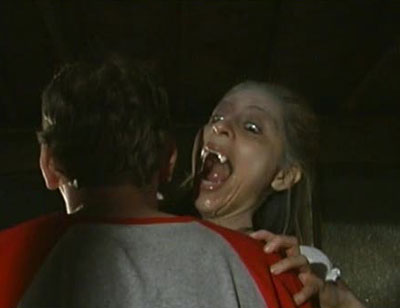 Tell the truth. You can never look at that Batboy pic the same way again, can you? Sorry bout that. The "action" (read: people walking around and talking) shifts to Amy's boyfriend Steve, who is not only sensibly worried about his mysteriously disappeared girl, but - get this - has a buddy who knows the idiotic internet guy who got dismembered back at the intro! Small world, the world of Night Fangs. Steve and his group of college buddies troop over to Casa Lesbian where they're promptly attacked and beaten to shit by a team of vampires (Lupe, Jennifer, and Amy). Here we get our first good looks at vampire effects, and they're not bad, if you ignore the huge lip bulges everyone has from the dime store vampire teeth. There's also a pretty cool shot of a vampire crawling down a wall towards an unsuspecting college kid, which gets even cooler in retrospect as you realize that the vampires of Night Fangs have no real supernatural powers other than a) the ability to roar like a constipated orangutan and b) the ability to futilely attempt to choke would-be attackers. If I were a vampire, I'd probably take advantage of my wall-crawling, increased strength, big-ass teeth, etc., but what do I know.

Some of Steve's crew (including Steve) get bitten. Some of them don't. You'd think this sort of plot detail would matter at this point, but it doesn't so much. There's no real rhyme or reason to how vampirism in transmitted in Night Fangs, which to silly ole me is kind of a sticking point in vampire movies. Not only that, but if I can rope at least one poor bastard into seeing this film out of plot curiosity, my job here is done. So for your review and edification, the following myths of Night Fangs REVEALED!

True or False: Sunlight kills vampires. TRUE, unless you're [mystery vampire].
True or False: Being bitten by a vampire turns you into a vampire. TRUE, unless you're [mystery victim].
True or False: Vampires can turn invisible. FALSE, except for this one time where she does, but perhaps it was all a dream!
True or False: Leaving blood smeared all over yourself all day after fighting vampires all night makes you look tough and increases sexual potency. TRUE, to judge by the cast of Night Fangs. These guys go the whole film in clothes that are soaked with blood, blood caked on their hands and faces. Apparently Lupe and Jennifer owned the only bathtub in the world, to say nothing of soap or water, though to be honest the bloodstains are so fake they'd probably rub right off with a slightly damp sweatshirt.

I learned some time ago that in the rich and varied sub-genre of abysmally bad horror films, there's two kinds of casts: 1) Casts where you don't know the names of the characters and don't care anyway, and 2) Casts where you know the names of all the characters and fervently wish you didn't. Night Fangs falls firmly into the former category; twenty minutes after viewing I was having to IMDB the character names, which led to a playful process-of-elimination logic puzzle to determine who was who. All I can tell you is Steve's the college kid who's blessed with a craggy Pleistocene-era smirk and a mysterious immunity to vampires, and Nashy is the old professor guy. I'm reading online that the name Nashy may be a tribute to horror film legend "Nashy", which is a relief since my theory of a bizarre Smurfs tribute wasn't holding much water, nor was a far-fetched hypothesis regarding the cryptic "fifth PacMan ghost." 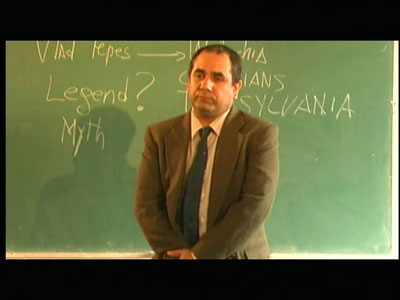 Nashy no fun fun, him take movie go home In fact I'd be badly remiss if I didn't give special attention to Nashy, the college professor who happens to be an expert on Elizabeth Bathory. Nashy is played by the director Islas, which means he gets to slump around sullenly onscreen for most of his scenes, presumably since he's so overtaxed with the relentless burdens of not giving a shit about lighting, cinematography, and art direction. Acting takes the stuffing right out of a man. Ricardo plays Nashy with a bizarre combination of world-weariness and sketchy-dude-at-bus-stop creepiness, like Peter Stormare on barbiturates.

There's all kinds of weird shit that makes no sense in the final act. A vampire tries to pass itself off as human by preparing itself to be lynched (noose around neck, teetering on tiptoes on chair). "Save me!" she begs. I dunno. If you were a vampire in a pitch-black basement, wouldn't there be a better way to get the jump on some puny mortals besides tying your own hands behind your back (?) and preparing yourself for convenient execution. Of course, she almost gets away with this ridiculous plan, so I guess you've gotta be a vampire to understand where they're coming from. Me, I'd be climbing on the walls and what-not, but maybe that ability has a 24-hour cooldown, to say nothing of being altogether outside Night Fangs' working budget of four cases of PBR and the neighbor's Super-8.

By the end of the movie, everyone's bloody and pretty much everyone's been bitten. Some are bitten fatally, some are just fine; some are vampires, some are not. There's a wacky surprise ending that I dare not reveal. I guess you'll just have to rent Night Fangs to find out for yourself. If you happen to live in Portland, your best bet for tracking down a copy of this elusive flick is at the Multnomah Country Municipal Landfill. Tell them I sent you, they've got a spot in the northeast corner set aside for my l'il DVD collection.