I didn't want to wake you up before I left, since I know being the Iranian president tuckers you out so very much and you looked like a little angel with that tiny pool of drool collecting on your Yu-Gi-Oh bedsheets. Your dad and I are going to be out for the next few days overseeing the national dance troupe's Prancing With Plutonium tour. There's Hot Pockets in the freezer if you get hungry, but BE CAREFUL! Remember to let them sit for a few minutes before you try to eat them or you'll burn your mouth again.

If your friends call and want you to come to a press conference, tell them you're housesitting and you aren't allowed to leave. They'll understand, and if they don't then they were never really your friends to begin with. Just have them issue a statement for you using any of the insane threats your father and I prepared below.

P.S. - We have set the parental lock on the computer machine so don't even try to visit "those sites". I don't want you spending all the treasury's money on online poker again! 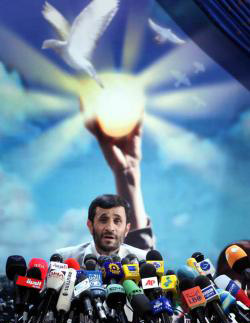 The United States would be foolish to launch a land war against Iran, for my older cousin knows karate. All of their rubber knife based attacks would be rendered useless, and their puny balsa wood tanks would splinter in a million glorious pieces upon his forehead. I'm pretty sure he can do a backflip too.

Not only do we have nuclear technology, but we are willing to share it with all enemies of the west, regardless of their age. The United Nations' law limiting the sale of nuclear technology to people 18 and older means nothing to us. We don't even ask for identification!

If the United States continues its agressive stance of not replying to our threats we will sit on their chests and slap their faces with their own hands, asking "Why are you hitting yourself?" in high-pitched voices.

Any military action taken by America will result in us activating one hundred thousand sleeper cells already stationed within your country's borders, who will then tune into Unan1mous on Fox every Wednesday night to ensure the show everlasting success. Their sacrifice will break the wills of our foes.

If the insolent United States bullies us further, we will retreat to our bathrooms and cut our arms just deep enough to leave marks but not deep enough to do any serious damage. Then one day we'll wear short sleeves and reach across the table for salt and the U.S. will be like "What are those marks? Oh my God, you did that because of us and how horribly we treated you?" and then they'll feel so horrible.

Once we have stockpiled the 87 nuclear warheads needed to complete the operation, we will strategically detonate them within our borders to spell out "AMERICA SERIOUSLY SUCKS! " (with the exclamation point) across the entirety of Iran. This message will be seen from space and also from a plane I guess but you'd probably have to turn your head to read the whole thing. This message will bring great shame to the imperialist war mongering nation for many years to come.

If any countries even think about siding with the United States in their recent unjust hostilities against us, you can just kiss your memberships to the Iranian Tabletop Gaming League goodbye. Our annual Warhammer 40k miniatures painting party is coming up in a few months too, so I suggest you think things over before taking actions you'll come to regret later.

Not only would we defeat America in a war due to our superior military, but we would also kick so much ass that we'd somehow find Atlantis with a wayward blow and completely destroy it as well.

Further actions against us will give us no option but to withhold all shipments of dulcimers to the outside world. Just how long do you think your populations can last without dulcimers before they crumble away to nothingness?

We are currently developing an impenetrable shield around Iran to protect it from retaliation when we kick your asses. Made of extremely lethal poisonous gas that corrodes through even the sturdiest gas masks, the shield will surround our cities in a cloud of protective death that no enemy can possibly pass through.

We are a superpower, yet we don't get the respect we deserve. Every time we turn around the United Nations is there to thwart us, hitting us over the head with warnings and resolutions. No more! We will prove once and for all that we are the greatest superpower in a 191 man no-holds-barred match at Royal Rumble! 191 countries will step into the ring. We will walk out the champs.

Our military is the best-trained and equipped in the world. No country stands a chance against us. Our soldiers have seen all of the Blade movies (except the first one, can someone help us with that?), our tanks are equipped with the latest in ground-to-air radios, and our electrical outlets don't have plastic safety caps on them so invading forces are in for a nasty shock.

We don't really have any problems with Topeka, Kansas. When the shit goes down you will be the only ones spared.

We are not afraid to launch another 9/11 attack on your country on an even bigger scale. Right now we are training holy warriors how to fly chartered private planes directly into your precious Grand Canyon.

Iran is the most powerful nation in the world. Even if every country in the world unjustly attacked us at once, we would be victorious as long as they concentrated all of their firepower on New Zealand.

Don't mess with my country because I'm freaking crazy, man. One time I was driving my car when a bad song came on the radio, and I yelled "I hate this song!" even though no one was even in the car with me. I mean, who was I even talking to?