What Size of Flag Does Each Presidential Candidate Prefer? 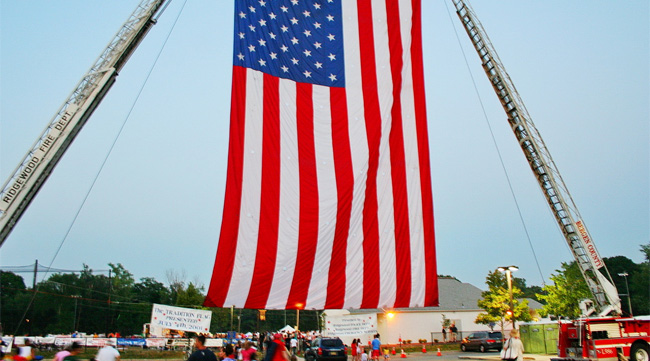 Go ahead, judge a book by its cover. Then proceed to judging presidential candidates by their flag preferences. They don't deserve any better.

60' X 100'
Trump likes a huge flag. It's the best flag and it's beautiful. This really is a good flag. It's the sort of flag you would see flying over the best restaurant along the highway in the Midwest. This is a flag at the absolute legal limit of local eyesore ordinances.
Ben Carson

3' X 5'
This is a fine flag. Nothing fancy. It gets the job done. For some reason several of the stars are little skulls on one side. Hee hee. Hee. Of course it's a good flag, exactly the same dimensions as the flag King David used in the Bible. Hee hee. With the little skulls.
Marco Rubio

18' X 30'
Marco Rubio feels this is an acceptable flag. It was the one he was told to use by his donors.
Jeb Bush

19' X 30'
Jeb saw Marco Rubio's flag and used a stapler to add an extra stripe on the bottom so his was a little bigger. Now the flag looks weird and out of place, like when a kid shows up at school with shoes that his mom bought him and he thought they were really cool but, no, Jeb, New Balance aren't cool. This flag shouldn't be hanging around anymore, and its palpable desperation is unnerving to watch.
Ted Cruz

30' X 50'
The problem here is that this flag shouldn't need to even be this big. Ted Cruz shouldn't have to prove he needs a flag like this, but the media demands it. He would be happy with just a flag pin. That's all he needs. Along with the innocent human blood he drinks every night.
Carly Fiorina

9' X 15'
When Carly Fiorina looks at that video, with the baby all scrambled up like an omelet, she thinks of this flag, with its red for baby blood, blue for baby brain juice, and white for baby bones. This flag says it is time to shut down Planned Parenthood, remove equal pay for women, and also maybe find out a way to take the vote from women. Because feminism has been ruined by liberals.
Chris Christie

6' X 10'
Neatly folded in a box that fits into Chris Christie's luggage for when he can go home and deep sit on his couch again and stop worrying about these fugging idiots talking about gross dead babies and pyramids full of grain. There's like 10 feet of empty space in a pyramid. Its all rock. What is that idiot even talking about?

3' X 5'
Signed by Martin O'Malley at the Martin O'Rally, Baltimore 2003. Framed in a glass case next to a certificate from the Fraternal Order of Police thanking him for supporting Operation Clean Sweep where everyone with a prior drug offense in Baltimore was loaded into a van, driven to Leakin Park, and made to dig their own shallow grave.
Bernie Sanders

60' X 100'
There is no reason that the wealthiest top one tenth of one percent should have over fifty percent of the area of flags in this country. This enormous flag is a tribute to collective effort. It was purchased with small donations from students and teachers and white people from New England who see approximately one black person per year. There's too many stripes and the stars aren't shaped quite right, but it's the basic idea that counts.
Hillary Clinton

18' X 30'
Hillary bought this flag in Iowa from a mixed-race flagmaker woman and her undocumented Guatemalan lesbian wife. They are trying to adopt a developmentally disabled child and Hillary was just so moved by their story that she had to buy the flag from them. She looks at it and thinks about all those children that have died in gun violence since Bernie decided not to support a national firearms registry.

6' X 10'
Jim Webb solemnly stares at this flag every morning to remind himself of all the men who died in Vietnam when he killed them. Some as recently as last week.