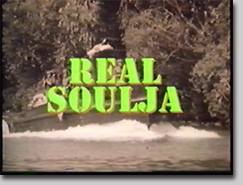 Overview: Vague, incomprehensible "action" film from the early 1980's that is either about drugs, guns, Vietnam, or the downtown Detroit athletic club. A bunch of random events occur, barrels roll around and eventually explode, and lots of people die. I think the plot is wrapped up in the end, but I'm not sure the movie had a plot. Or an end.

The Case For: The whores in the movie aren't nearly as ugly as every single other female creature ever shown in any film from the 1970-1984 period of horrible, horrible action movies.

The Case Against: The men more than make up for the lacking "ugly" quota. Film also features pointless and nonsensical scenes of objects exploding, people dying, and unintelligible plot twists that don't twist at all but instead travel in a straight line at three miles an hour until they smash into a wall or drive off a cliff into the chasm of moviemaking failure. 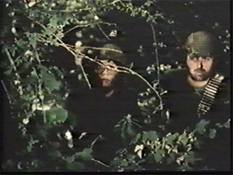 Charlie in the trees, idiots in the bushes.

Ah, the early 1980's. There was a brief, glorious "golden age" in cinema from approximately 1970 to 1984 that most self-professed "film experts" don't acknowledge. Why? Because film critics are generally stuck up, snobby, egotistical jerks who wouldn't recognize a good movie if it shoved pointless explosion after pointless explosion in their face. Generally speaking, film critics snub movies that feature more explosions that cast members, which goes against my three requirements for a successful film:

The grainy, incomprehensible, confusing action films from this golden age all proudly feature these three qualities. I'm glad to say that "Real Soulja", or as it was originally called by the Italians who originally released it to the original Italians in Italy, "Razza Violenta," has all these fabulous traits and so much more. Unfortunately the "so much more" part merely refers to "a lot of randomly colored barrels which explode when shot," so it's pretty safe to say that this movie is being reviewed on this site for obvious reasons.

As the film starts out, we are treated a wonderful montage of a boat traveling down an unknown river in the woods. Since it's the early 80's and the film takes place in a wooded area, it's fairly safe to guess that they're traveling in Vietnam. All action films back then which had more then twelve trees (and no pimps) were supposed to take place in Vietnam.

The boat docks and our heroes slip out, each one dramatically pausing in front of the camera for a mug shot. Director Fernando DI Leo, who oddly enough gave up the whole movie gig (or he was murdered) after running this film into the ground, somehow believed that the comic-book style closeup of each main character would translate well into his "feature" film. I was just waiting for Woody Strode's picture to come up and watch a big white rectangle appear in the upper right-hand corner like the following: 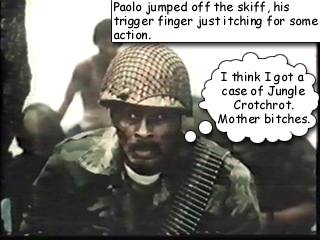 Strode and his merry band of American mercenaries trot off into the woods / jungle / producer's backyard, where they encounter their target: a wood cabin surrounded by sleeping Vietnamese extras. The group of heavily armed Americans bicker over a map for a bit, then fan out and proceed to implement their devious plan of "killing all the Vietnamese without using any of the weapons they brought with them on the trip." Each soldier ditches their guns and grenades for bolas and spears they make on the spot from surrounding trees and rocks. Why? Who knows. This is probably why we ended up getting our asses handed to us in the Vietnam war; US soldiers headed over there armed to the teeth, but as soon as they stepped off the boat they tossed all their guns into a gigantic pile and instead attempted to bludgeon the enemies to death with rocks and native plant life.