Overview: In an unfortunate mistake by the printing company, "Jacko" has the last two letters, "ff", accidentally left off the title of this film. The result is a moronic waste of 90 minutes revolving around the cliched pumpkin-headed beast from hell that's out to kill a braindead kid and his clueless parents. Although it was created in the 1990s, many of the fashion trends and hairstyles seem to be stolen from the late 1970s.

The Case For: All the video clips featured in this review.

The Case Against: Everything else. 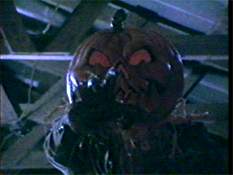 Hi Jacko!When I was a young child (as opposed to an elderly child), my mother would never let me watch horror films. "Friday the 13th"? Nope. "Nightmare on Elm Street"? No way. "Psycho II"? Not a chance. However, now that I'm somewhat older and have a more objective viewpoint, I can understand why these movies were off limits to me: I was a real wuss. My parents still tease me over the fact that when I was a kid, I would throw my blanket over my head, start shrieking like a wounded ferret, and flee from the room every time the theme song for "Pigs In Space" began. That damn Muppets show scared the living piss out of me. Why? Probably for the same reason that the Police robot from "Heartbeeps" caused me to begin weeping uncontrollably - my wuss gene was predominant until around age 12 or so. Make no mistake, I was still a little nancy-boy at 12, but at least I could build Capsella machines without fearing they would come to life and shove their little gear-infested plastic balls into my pupils.

Although it may seem l'm going nowhere with this story, I do have a reason for once again making a jackass out of myself for your own personal amusement. One of my most vivd memories as a child (besides my "Street Machine" bicycle) was the time I snuck over to a friend's house to watch a "scary" movie on cable, a type of movie that my parents wouldn't normally let me view. It was one of the first major acts of rebellion I committed, preceding the whole "death threats to Jodie Foster" phase I went through a few years later. My friend Chris and I stayed up until 1 am that night, snuck downstairs, and turned on the TV to watch the apex of all horror films, "House on Haunted Hill." Being the ignorant kids we were, we thought it would be scary. As we realized a scant 15 minutes into the movie, the film was really, really, really lame and in black and white, which counted as two strikes against it. It wasn't scary. It wasn't entertaining. It was just LONG and DULL... yet we couldn't stop watching the film because we had planned this event and were "bucking the system." We were "sticking it to the man", whoever the hell "the man" was back in the early 1980's. Chris and I stayed up until around 3 am watching this drawn out and boring piece of 1958 film history, because at that point, we were morally obligated to.

"Jacko" is much like the first movie that crushed my childhood dreams and trampled over my will to live. The 88 minutes spent watching the random images from this cinematic bomb flash before your glazed-over eyes stretches out to what could easily be three weeks. If you make the mistake of renting this disaster, you will soon feel the familiar tinge of childhood disgust and letdown which originally convinced you that your life was a meaningless lie and parade of eternal shame. Well, either that or you'll return it and ask for a refund.

The beginning of "Jacko" shows some promise, as it immediately introduces a fat guy with a knife sitting around a campfire. The fat guy is sitting around the campfire, not the knife. As far as I know, knives can't sit. Anyway, the fat guy must've just failed from "Opie Rubenowski's School of Acting and Long Division" because he's spewing out dialogue like a jammed up natural gas pipe [1.37 megs]. The nameless fat man, who remains nameless (and fat) throughout the rest of the movie, is telling a kid named "Shawn" about the legend of "Jacko", a demonic pumpkin-headed ghoul who "steals your eyes." Shawn reacts by staring forward, much like how he acts throughout the rest of the movie. In yet another taste of what's to come, Shawn falls into an instantaneous flashback, pulling the movie back into the 1800's. Shawn, who is now wearing slightly different clothing and as is referred to as "Kelly", attempts to stop his dad from building a wooden cross and going off to get killed. This scene displays one of the most reprehensible spitwads of dialogue, one where both actors play "musical accents" with each other while speaking about absolutely nothing at all [1.6 megs]. Although they try to express a feeling of desperation, they both end up sounding like they're really tired. Shawn's dad, who spent a few hours hammering a nail into a wooden cross, explains how he's going to go kill a devil or a daemon or a person or a plant or something. The father leaves and suddenly the flashback is over - except Shawn is now somehow in bed.