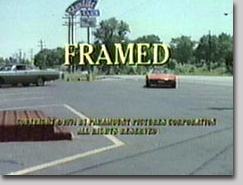 Overview: Joe Don Baker is framed for a crime he didn't commit. Well, okay, technically he DID commit the crime and he wasn't framed at all, but Baker has such a likable character that this minor flaw can be easily overlooked. Well, okay, technically Baker's character isn't likable at all and is in fact a horribly repulsive and disgusting slob, but this can be overlooked because... uh... somebody help me out here, I'm running out of reasons.

The Case For: Joe Don Baker is repeatedly beat up and physically abused throughout the film. If there's a single thing in existence that's more appealing than this, I'd like to hear it.

The Case Against: Baker survives to the end of the film and actually has, ugh, a SHOWER SCENE in the process. Plus the film is named "Framed" and not a single damn person is framed anywhere in the entire movie. 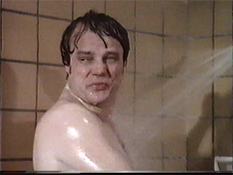 Joe Don Baker has the charisma of... Jesus, just look at the damn picture and you tell me.

I don't think I've completely recovered from the mental thrashing I received while watching Joe Don Baker's previous claim to fame, "Mitchell." Nobody really appreciated his vast and all-encompassing acting talents until the guys at Mystery Science Theater 3000 had the guts to take it on and bastardize the film for the world to enjoy. I fell in love with Baker the minute "Mitchell" graced my television screen, instantly becoming obsessed with his magnetic onscreen performance. Every single nuance of the man captivated me, from his awkward, lumbering running scenes to any shot where he's attempting to act "appealing" to people of the opposite gender (women I assume). I've seen countless actors portray a broad spectrum of emotions ranging from anger to love to joy, but never had I witnessed such an accurate capture and representation of pure, vile disgust. Every motion, movement, and word from Joe Don Baker's mouth creates such an intense and oozing sense of unbelievable filth that my brain has shut down on multiple occasions of witnessing Joe Don Baker clumsily plod onto my television screen. That said, on with the awful movie!

As the film begins, the viewing audience is once again brought back to rural Tennessee, the state predominantly targeted in the Joe Don Baker School of Cinematography. I'm not really sure why all Baker films took place in Tennessee, but I would guess this was because Baker lived there and rolling his fat ass out of bed to a stage set a few hundred feet away was a lot easier than rolling him all the way to Hollywood. Plus there are probably laws prohibiting Baker from even setting foot in Hollywood; I think the entire state has a restraining order against him, which President Bush should think about adopting for the entire nation (assuming the President can find a garbage barge large enough to house Baker's pasty ass when he's shipped off to Siberia).

Baker plays Ron Lewis, an overweight, sweaty, oily, obnoxious alcoholic addicted to gambling. Needless to say, this film didn't really strain Joe Don's limited acting skills. He and his wife / girlfriend / lover / mother / accountant Susan own a nightclub called the Starlight Club, a rotting hunk of wood and steel alongside the Tennessee Route 1/2. Susan (played by actress Conny Van Dyke, who failed to appear in another film following this movie's release) is somehow in love with Ron despite the fact that scientists have proven it's 100% impossible for any human being to ever be sexually attracted to Joe Don Baker. Susan demonstrates how deeply she loves Ron by singing to him on stage, which is luckily a good 50 feet away from Ron's booth. Despite this large distance between the two, rumor has it that the director still had to use a stunt double to replace Baker, as Van Dyke simply couldn't get out more than two lyrics without looking at him and sobbing uncontrollably.

Ron gets a phone call from what apparently is his 1-900-GAMBLIN' hotline, informing him that his presence is required at an informal gambling get together. Ron explains to Susan that "a bunch of turkeys are coming down to go duck hunting", which I assume means he wanted another plate of turkey stuffed with duck. After causing three more all-you-can-eat buffets to go bankrupt, Ron and Susan head off to the airport so he may catch the next plane to Gamblingville or wherever the hell he was supposed to be going. In what is probably one of the most absolute disgusting and unnecessary scenes in the history of movies, Susan gets crapped on by a passing bird. I don't know if this was meant to create comic relief or just make Baker seem to be less repulsive by comparison, but the image of Joe Don Baker giggling next to a woman with green shit caked throughout her hair will haunt me until the day I turn a pistol on myself.