FUHHHHHH I SHOULDA RUN FOR CONGRESS

That lactonic motherfucker todd has been leaving late night creeper messages on my voice mail talking about watching me when I go to the bathroom. Figure he put a camera in the shitter. Will check on that when I get a chance. Hey what's up hope Jesus blessed your gay lives you fuckers. Reason for the season.

Soooooo I fucked up. As you may have gathered from the title of this particular column I have chosen the wrong path for my political absorbations. Tank told me that being mayor of Wasilla would be like a sweet way to tell Mrs. Palin to chew these raunchy balls of mine without getting arrested for issuing ball chaw threats. Actual statue on the books in Wasilla, look it up. Levi's Law.

Anyway so I was watching the other night when fucking Two and a Half Men got preemptioned by BS and every channel is a bunch of brokaws talking about some election I didn't even know was happening. I mean, fuck, wasn't Mrs. Palin's old zombie plane crasher dude getting welcome to earthed by Will Smith like a year ago? WTF?

Turns out they do other elections for this shit called congress. You heard about this? It's like 5,000 people who get voted in and get paid like 100,000 dollars or some giant amount of money to live in Washington D.C. and have lunch with rich people who want them to do shit. It's basically what I do already except with weird gay dudes who keep feeling my leg under the table until I have to tell them straight up Calvin Klein if you try to mess on my junk again I am going to pull your cardigan over your withered skeleton head and throw you through that plate glass waterfall thing. Which I did and got escorted out of a restaurant called "Hu" but spelled with a number somehow.

Anyway point is like anybody can get elected to congress this shit in unbelievable. Mexicans, women, black dudes, fat guys, I'm pretty sure I saw a rock man like a golem or something got himself elected in New Mexico but that is the fucking Land of Enchantment so anything goes out there. Harry Potter ensorcelling a motherfucker on some painted sands and shit. 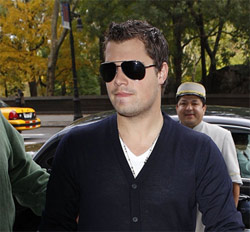 Pretty much ready for anything at all times, always, but I am most of all ready to serve my country and my town.The door was wide open for me to advance my careers, but even better, like I read on a blog or whatever that Mrs. Palin backed a bunch of these fucks to do shit and here I am in Wasilla trying to write a mayor speech and on my fifth season of the seahawks franchise in madden which, excuse me seattle, but yall don't know shit about football. Playing seasons as you I might as well be trying to sack favre and his little baby dink with a class of preschoolers, which is by coincidence also a violation of Levi's Law. I'll just run a nickel defense or try to get a Kardashian pregnant again. I don't remember which one it was. Oh, it was the one who forgets to clean toilet paper off her brown eye. Khloe? I swear it looked like an asterisk cut himself shaving and it smelled like a barnyard. I didn't know whether to lay waste to that with my lil' wrecker or go get my compound bow. Went with both.

Anyway, back to my point: fuck mayor. It's bullshit. What do I get to do as mayor, like ban some books, make some girls pay for rape kits? Whatever. These retards in Wasilla would be way better off electing me to congress for 100,000 dollars. I can bring the real pork home. Meet some dude from like Raytheon with the KY-69 missile who wants me to fund robot drones to shoot the missile at like Liptonstein or whatever and I can turn around and say only if you agree to build nerve gas bombs in Wasilla. 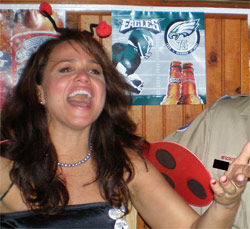 Okay, get me drunk enough, get me at least two special ks, and I MIGHT let this chick get out her nasty gash and wave it around and then push her down a flight of steps like american psycho hooker style.Harry Reed dude. Pretty sure this dude was in a library because he whispered everything and seemed afraid to look at the audience. I think he's a democrat which means he's probably huuuuuugely gay. Seems plausible. Don't know what his platform was but they showed a picture of the lady he beat and said she was all about secrets and illegal immigrants and she looked like Robert Blake in that highway movie dressed up as Sarah Palin. Way to go dude you got a bunch of Mexicans to beat up a woman so you can be in charge of sucking dicks in the periodicals.

Christy O'donnell. Don't think she won, but she almost did and I read on the gawker blogs that she dressed up as a lady bug and has huge pubes. Girl, I love your freak side, I can dig the hairy bug, but fact is if you can't even take care of your crotch how the hell can you take care of our babies futures??? Mrs. Palin liked to let the yard run wild too and look at her she's talking about muslims at the grand ol' opry. Pass. 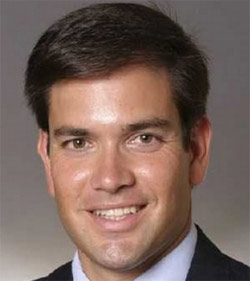 "Sorry it had to be this way, Sonny. You asked too many questions." *In the Air Tonight rocks out*Marco Rubio. He's perfect. A latino that actually likes republicans. What is this dude hiding? He looks like he was cast for Miami Vice and I don't mean that horrible one with Jamie Foxx. Rubio is like the hard-hitting Miami DA who is secretly the brother of the vicious cocaine drug lord Juan Rubio. Sets up a lot of conflict. Can he bust his own brother? Will he betray Tubbs and Crockett? Look at those beady little eyes, shit yes he will. He will sell them out in a yellow speed boat and a bunch of cubans with uzis will chop their dicks off. Go home and do a mound of coke with the World is Ours over a zebra print couch.

Joe Boners. Who the fuck????? This guy has like a weird little kid's face with twinkling eyes, he always cries, and I think he might be some weird race I've never heard of. What's orange people? Mongolian? Wherever he's from this dude and his melty faced sidekick took over or something and now they're gonna repeal health care. Great. Just when I get done being put back on my mom's health care after I had to have the front of my foot reattached following a mysterious incident I will not divulge but might have involved shooting a shotgun to dig an ice fishing hole. Awesome name on this dude though. 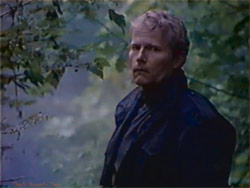 Not pictured is some cat moves done on this dude by jessica alba wearing some sort of camel toe suit. Chris Coons pretty sure this is the dude who was Colonel Lydecker in charge of finding the X-5s that escape from Manticore in James Cameron's post-apocalyptic biopunk classic Dark Angel. Only Chris Coons is a racist name. How do you get elected being racist in your NAME? Seems implausible, might want to look into those vote totals and also the premise of the pulse disabling all electronic devices in the US. Or whatever. Did the seahawks shitty run offense and that faggot hasslebuck survive the pulse? No doubt. I think this is the dude that beat the ladybug, so congrats on becoming seattle congressman and beating the squirts out of a natural woman you racist fucker. On June 1st, 2009, the terrorists are gonna make you pay.

Basically all of these dudes and a lady are idiots I could have beat your asses like Chugiak Mustangs getting high-sticked in the throat and skating around all squatted up crying about airway injuries. Chugiak and Eagle River both 100% pro-hockey babies. Fuck you in hockey hell forever. The only airway injury I know is when I bent back my finger trying to scoot back some sort of Ethusian porno model sitting on the bathroom sink of a Jet Blue flight from pittsburgh AND I still banged her crosseyed and joined the mile high club, I didn't start crying around about my jammed up finger and beg the ref to call a penalty on the sink.

And that's why I am running for congressman of Wasilla. I hope I have your vote.

Levi Johnston, former-mayor candidate, magazine model, congressman of 2011 or whenever they do another election.