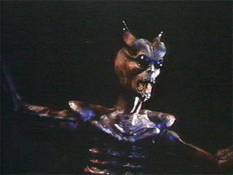 "TOUCHDOWN!"However, it turns out he's not gone! He's back in the next scene, having sex with his girlfriend again. The only difference is that he's lost his myriad of accents and is less of a moron. How can these dark servants of the devil be evil if they can do such nice things? Nobody notices his lack of fake accent the rest of the film, backing my original assertion that "this film is really stupid". A few groupies show up after the "sex" scene, but are quickly rebuffed when Phil, the band's manager who was supposedly killed a bit before, asks them to take their shirts off. Thankfully, they don't.

The movie then cuts to the bass guitarist and his wife doing dishes. He obviously has some kind of Palmolive fetish as he gives his wife the following romantic, tender, and loving line:

"I'm sorry, whenever I see you doing something so domestic, my boner just can't help itself."

Does that line get you all hot and bothered, ladies? In one fell swoop, the bass player is able to humiliate himself, his wife, and the entire movie. Congrats, "Rock n' Roll Nightmare", you've made me even more stupid!

If that line wasn't enough for you, the movie goes to another jam session where the band plays their smash hit, "You Give Me Energy". After their speakers and instruments decide to commit suicide, the daemon drummer and his girlfriend walk out to the lake to have sex. She appears to be turned on, at least until a giant hand tears through his chest and begins to fondle her breasts.

There's a few more sex scenes, including a particularly disgusting one involving the lead vocalist, his girlfriend, a shower, and soap. After watching this cinematic horror, even the biggest viagra joking, TNT watching, monster truck racing fans will find themselves questioning their heterosexuality. The backup guitarist and his girlfriend follow some boy who randomly appears in their bedroom into the basement of the barn / recording studio, and he turns into some kind of dog thing which kills them. Now the only survivors that have, er, survived, are the lead vocalist and his girlfriend. The girlfriend is quickly bumped off the "Who Wants to Live?" list after she's knocked off by dogboy. Rock and roll! 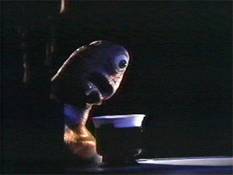 Yes, that is a sock puppet spitting in somebody's coffee.

Triton (the lead vocalist) heads off to the barn / recording studio to work on his latest song which is probably some tribute to hair oil, and is given the bum's rush by a few sock puppets that are thrown over his head in a particularly hilarious scene. His girlfriend, who is now a spawn of the devil, threatens his life and then metamorphosizes into ol' Scratch himself. The Devil challenges Triton to a wrestling match, and Triton reveals he's actually an archangel named "The Intercessor" that was sent to Earth to make sure Satan doesn't "overstep his bounds". He takes off his shirt, straps on a remarkably lame cape and mascara, then begins to lock arms with the Devil. Since the wrestling match was too long to film, I have put up a collage of pain from the "Triton vs. Devil Grudge Match". Check out the pictures if you dare.

The Devil has a few tricks up his sleeve though, and he starts to throw evil starfish at Triton. The starfish would've bounced off Triton's well-oiled chest, but he chooses for some reason to catch and hold them against himself while he grimaces. The starfish scene is truly a cinematic masterpiece and I would recommend anybody reading this to download it unless you have something better to do, like breathe.

Satan eventually gets bored of fighting, so he falls over and vanishes in a cloud of smoke and sparks that must've taken at least two roman candles to produce. Triton, the archangel / vocalist, visits the tombstones of his friends in the local cemetery and tells them he has "avenged their deaths". Yeah, what a fucking great guy. He brings them all to an abandoned farmhouse in Canada so they can get killed by the Devil, he punches Satan in the face a few times and wins by default, then he brags that he has avenged their deaths. My hero.

Rock on! "Rock n' Roll Nightmare" has it all; terrible sex scenes, unbelievable special effects, a grade school plot, big hair, and bad music. It is truly a work of awfulness. I will always remember the wonderful starfish scene as long as I live and will run out and buy Triton's next 8-track the next chance I get. No really, I will. Rock and roll foh-evah!!!