This common variety of ice cream includes a metal hanging hook for children to choke on.As of my writing this, you are no doubt aware that the year 2002 has succumbed to old age, and that a new year, 2003, has violently seized power. It's all part of linear time, and that's just one more way the International Conspiracy is holding you down. But that's another story. One of the staples of a new year is the massive deluge of people resolving to better their lives, usually by pledging to stop shoving cake or cigarettes (CANCER STICKS!!!) into their mouths, or to stop beating on their kids so much even if the little shits do deserve it. New year's resolutions are mighty common around this time, as a new year means a new chance to be reborn. This method of rebirth is quite popular, because it doesn’t require you to climb back into anyone's womb or sign a lengthy contract with God (or Allah, as the Native Americans called him). I'm not just talking about all this new birth because I suffer from womb envy, but rather because I believe strongly that something society loves greatly needs to be reborn.

Yes, ice cream. I don't know what happened to our good friend ice cream over the years, but things have spiraled out of control. I can remember the fancy-free days of my youth when ice cream was a delightful and innocent treat. You knew what to expect with ice cream, and ice cream knew what to expect from itself. Sadly, over the last couple decades ice cream has lost itself, wallowing in an endless decadent rainbow of color and taste possibilities that just aren't natural. Our friend ice cream has lost itself and all base with reality, a major tragedy if you ask me. Ice cream is supposed to come in three flavors and only three flavors. There is vanilla, chocolate, and strawberry. Buy them on their own, or if you're an open-minded taste connoisseur, buy a variety pack with all three flavors sharing one package. That's the way it was when I was a kid, and we sure didn't have any problems like we do today. In a way, there was a flavor of ice cream for everyone, be they white, black, or the catchall race of other. Not that ice cream was opposed to taste miscegenation, mind you.

Now a days if you go to a grocery store or ice cream parlor to look for a delicious treat you're likely to be bombarded with ridiculous flavors and names like these:

Flesh of the Damned with Mint Chips

Okay, so maybe I made all those up, but they aren't that far from what's really out there. Most modern flavors are so idiotic they could only be made inside the ear of a giant pumpkin, and pumpkins don't have ears, you stupid lunatic! Once again, all we really need is:

I know you're probably a bit shaken up confronting this harshest of truths that you've so recklessly denied even exists, but I'm sure you see what has to be done. It's time we band together as an angry fanatical mob and eliminate these undesirable flavors of ice cream once and for all! It's time we clean up ice cream and make it pure and whole again! It's time we restore the Vanilla-Chocolate-Strawberry Collation to power! Man was never meant to consume let alone create these wild, impure explosions of flavor. Do you want to know why our global economies are failing, why our world is in a state of perpetual unrest, and why we have so many jobless? Because of dangerous flavors of ice cream! These flavors stimulate the senses in a wild roller coaster orgy of insanity making men into monsters and brains into frozen mush while subverting our taste standards along the way.

If you care about the ice cream you eat, then you will join my new Ice Cream Decency Patrol. The ICDP is intended to promote clean, safe, and wholesome flavors of ice cream, including and limited to vanilla, chocolate, and strawberry. The goal of every ICDP member is to eliminate undesirable flavors from stores and homes in what we will call Operation Meltdown. Operation Meltdown is no easy task, so it will be broken into four phases of violent revolutionary action. 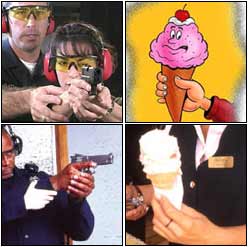 You don't think ice cream is dangerous? Take a look at these pictures of ice cream cones and handguns. Note that both are gripped by people using hands! Could you tell the difference in a heartbeat?

Phase One: Target buyers of undesirable ice cream. By systematically finding and harassing those supporting and addicted to the beast, we will slit the throat of the corrupt companies manufacturing these pornographic flavors. Consumers will suddenly find their names appearing on public lists of known ice cream deviants. These lists will be posted all over town and include home addresses. Ice cream deviants will also become the subjects of extended physical and emotional harassment by ICDP's Public Relations Officers, not out of meanness, but out of genuine concern for what we call the moral-taste sanitation of the human race. Ice cream deviants will not only find themselves targeted, but their friends, family, and support bases as well. They will be ostracized in the most humiliating ways, including being ostracized while wearing an ostrich costume and doing an amusing ostrich dance.

Phase Two: Attack the stores and retailers selling undesirable ice cream. The retailers will already be dealing with the deadly venomous bee sting we gave them by driving away business, but that's only the beginning of their suffering. We will begin mass protesting of stores and parlors selling obscene flavors and move onto harassment and vandalism. The crux of our actions will be the establishment of a website with names, addresses, and pictures of every known ice cream vendor that doesn't play by our rules. This site will probably be hosted on Geocities, because Rich is being a jerk and won't let me put it on this site. This is the phase where the ICDP takes its war from the streets to the suppliers, who by chance and progress happen to be located along streets themselves. Once we take down the foot soldiers, our battle will be over. Next stop: winning the war by tackling the war machine.

Phase Three: Attack the manufacturing plants by destroying the necessary equipment and resources of production. This is where we cut our enemies supply lines, crippling his ability to produce the profane creamy ice responsible for our problems. To accomplish our goals, we will carefully read the ingredients printed on ice cream packaging. In the off chance we can actually figure out what any of that shit is and where it comes form, we will go all gangbusters and raise a ruckus. In all likelihood, this will be the phase where we kind of just lie back and keep it cool. To make sure this phase isn't too uneventful, I will grow increasingly despotic and paranoid and begin acting out against my senior officers. Loyalties will be tested, and blood will be shed! Yep, just lying back and keeping things cool.

Phase Four: Burn it all, let the Earth drown in the spoils of our victory. This is where the vile ice cream barons suffer their crushing defeat. We will lay siege to their factories and ice cream assembly lines before setting things ablaze! Because fire and heat are the natural predators of ice cream, you can bet your your fisrt born that there is going to be some serious melting action. Thousands of megatons of ice cream will be melted, securing our victory and beginning a new age of ice cream production and consumption. But more importantly, I WILL BE THE MOST POWERFUL MAN IN THE WORLD AND NO ONE WILL DARE LAUGH AT ME AGAIN!

With the victory of Operation Meltdown resting comfortably in our victory storage containers, we will then be able to focus on other important goals, like telling people how to think and act. But to concentrate on our immediate gains, the ICDP will ensure that God's three chosen flavors will once more reign supreme. This is what 2003 is going to be all about! Ice cream will be reborn, and my drunken New Year's resolution of becoming the Ice Cream Führer will come true. But like line dancing or armed robbery, it will only happen if you do your part! Join the Ice Cream Decency Patrol! Make a difference!

We're ringing in the New Year with a new movie review by none other than Ben "Geist Editor" Platt. That sass mouth watched a little gem called "Slaughter High" and much to the surprise of the known universe, it wasn't very good. 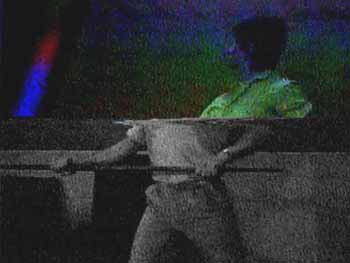 A conveniently placed gigantic calendar shows that the day is April first, prompting the incredibly irritating singer of the horrible attempt at a rock song to shout out "It's April Fool's Day!" I guess the calendar saying as much in huge letters is too subtle. Carol and Marty go into separate shower stalls in the girls' locker room in order to disrobe. The film crew enters and quietly assumes their positions outside Marty's shower. Carol turns on his shower from outside of the stall somehow and tosses him what appears to be a gigantic freakish condom half-filled with shampoo. Being the suave ladies' man that he is, Marty inflates the condom like a balloon, then lets go of it, sending it flying over the shower wall. Obviously aroused by his experiment in aerodynamics, Marty shouts to Carol, "This is the best birthday I ever had."

Start things right and resolve to read this review now! Not only will you learn how bad this movie is, but you'll also gain a deeper insight into just how Ben is able to view movies (Hint: he uses a VCR and TV!).