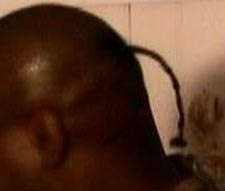 WHAT. THE. HELL.Victor shows up, sticks a stethoscope on Whitney's neck, and proclaims her to have a high fever and nothing more. The other guests aren't terribly worried. After all, according to one of the guests, Whitney is famously agoraphobic, so she always thinks she has one disease or another. Of course, agoraphobia has nothing to do with diseases, but that's okay. The guests might be more worried, however, if they knew the terrifying truth - Victor is a horrible doctor! Seriously, I might get all of my medical knowledge from reruns of Scrubs, but I'm pretty sure that a stethoscope to the neck is not an effective method of gauging the temperature of anything other than the stethoscope.

Before Victor can leave, however, Whitney sees our old friend, the shirtless guy in ugly green makeup! That doofy bastard is always good for a laugh. Unfortunately, like her sister, Whitney has a poor reaction to seeing him - she tries to claw Victor's face off. Something about this green guy makes people want to attack the nearest medical professional. I don't know what it is. 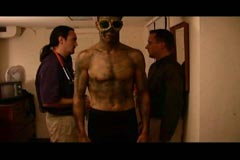 Foreground: Shirtless Green Guy. Background: Nerds.After sedating Whitney, Victor notices that she appears to have what looks like black spray-paint on her shoulder. Her shoulder was bare the whole time, so maybe he should think about performing examinations just a wee bit more thoroughly in the future, hmm? Victor can't identify this mark as any disease he knows, and since he knows every disease in the world, he instantly calls his buddies at the Center for Disease Control and tells them he's got something new to show them.

Victor asks all the party guests to stay in the house, telling them that they may have been infected with a previously unknown disease, but that the nice folks from the CDC will be there shortly to administer vaccines. Let me run you through that one again: he tells them that they may be infected with a disease no one has ever seen before, but people will be there soon to give them a vaccine for it. Victor is the worst liar on Earth. Fortunately, he's talking to a room full of idiots, a six year old boy, and a baby, so everyone believes him. At least for a little while. After about ten minutes, Edward finally realizes that you can't make a vaccine for a disease you've never seen before. Putting two and two together and winding up with a solid five, Edward deduces that the CDC isn't coming to cure them, but to watch them until they die. He starts to denounce Victor and all his talk of rescue by the CDC, when suddenly, trucks pull up outside. This, I swear, is the actual exchange.

Are you surprised that there's no writer credited for this masterpiece? Well, Edward isn't going to just stand around while those nerds from the CDC watch him die all day, lording their hazmat suits over him like they're all cool or something. He storms out to give them a piece of his mind. They shoot him dead. Men With Guns - 1, Lethal Disease - 0.

Cathy cries out for her murdered husband, but only once, and that's the last time he's mentioned. The Maid tries to sneak out of the house, but suddenly she is attacked by Whitney, who probably saw the green guy and couldn't find Victor. Again, Whitney is sedated and put in bed. Victor tends to the Maid's wounds, then suggests that everybody just find someplace to sleep until the CDC guys figure out what to do.

Michael is fine with this plan. He was evidently planning on staying the night whether he was invited or not, considering that the next time he appears onscreen, he's in his jammies. His wife Hellene is less thrilled. As she's about to go to bed, she sees the shirtless green guy go running into her room. She calls her husband and the other men to help her investigate, but they don't find anyone. Not a good sign, I'm afraid.

Ben goes up to the master bedroom to check on Whitney. Once there, he hears a dopey voice, like HIM from The Powerpuff Girls, only less intelligible. Yes, I just referenced The Powerpuff Girls. Deal with it. Ben also appears to have some of that nasty black spray-paint on his chest. It's like he has a huge, dark tuft of chest hair, only shinier. After the voice tells him& something& Ben chokes Whitney to death with a plastic bag. Men With Guns - 1, Asshole husband - 1, Lethal Disease - 0.

Bored, but unwilling to go to sleep after Hellene thought she saw an intruder in the house, the remaining guests gather in the living room and flip through TV channels to pass the time. They catch a few seconds of a live newscast that seems to be about them and their quarantine, but they just pass it on by without comment. They have bigger things to worry about, evidently, such as Alyssa locking herself in her room. Sure, the doctor advised them all to just go to sleep, but dammit, Alyssa is being awfully quiet in there! Pretty much every character left in the movie tries to talk Alyssa into coming out, and even after everyone else gives up, Veronica goes back up and tries again. Then, while she's up there, she decides she might as well check on Ben and Whitney. That's when she discovers that Whitney is dead, and Ben seems a little unhinged. He thanks her for her concern by stabbing her in the neck with a pen. Men With Guns - 1, Asshole husband - 2, Lethal Disease - 0.

Joseph gets worried when Veronica doesn't come back downstairs, so he and Victor go up to check on her. They find Ben now standing over two dead bodies, babbling in a generally unhelpful manner. Victor barricades Ben in his bedroom, while Joseph heads downstairs, goes into the sunroom (where it is evidently daytime), and gets nice and drunk.