Americans were treated this summer to a brief respite from the bellyaching of the theater chains and the MPAA over falling box office returns and the dread menace of piracy. By grimly sticking to their plan of ceaseless mediocrity and rising ticket prices Hollywood has managed to bully audiences into accepting what they were given rather than demanding something better. This summer, Hollywood won big, and the town is flush with over four billion dollars in box office revenue. It's their biggest haul to date.

What films made this record season possible? I'm afraid it's time for a quick look back on another summer we wish we could forget. This summer's ten highest-grossing movies are presented in reverse order in a blatantly manipulative attempt to build the dramatic tension. 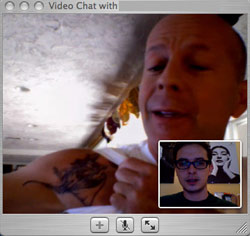 Now get on your webcam and apologize.10. Live Free or Die Hard (Fox) - $132 Million - After an experimental period working in low-grossing indie films like 16 Blocks, Alpha Dog, and A Day in the Sun, Willis dusted off his motherfuckers to reprise his role as Detective John McClane. The whole family was invited to this PG-13 exploration of adult themes like "cars flipping through the air" and "a jet plane exploding crap" and Willis was finally able to afford that McLaren F1 he's always wanted.

8. The Simpsons Movie (Fox) - $173 Million - Audiences were caught in the cyclone storm of advertising surrounding this unappealing dud of a movie and physically carried into the theater by incessant TV spots. Trying to get a rebranded Slurpee and a can of Buzz Cola turned out to be more entertaining.

7. The Bourne Ultimatum (Universal) - $185 Million - A stone-faced Matt Damon outwits the entire CIA - again - and robot-fights a bunch of trained assassins along the way. The Bourne Cinematography is a boon to odor-canceling sawdust manufacturers, bane to theater janitors.

6. Ratatouille (Buena Vista) - $199 Million - Pixar teams up with Iron Giant creator Brad Bird and makes a movie that almost allows us to forget that unforgivable pile of shit Cars. It's still a reminder that Pixar is responsible for the death of Hollywood cel animation and, by extension, the endless series of Shrek and lower rent cousins like Hoodwinked!

5. Harry Potter & The Order of the Phoenix (Warner Bros.) - $283 Million - Warner's unstoppable money train departs Platform 9 and 3/4ths once again. Adults lined up by the hundreds of thousands in their wizard hats for what was hailed by many critics as the "darkest installment" in the series. British kids in uniforms have terrified audiences for decades, give them magic powers and put them in a gothic castle and you can just forget about it. 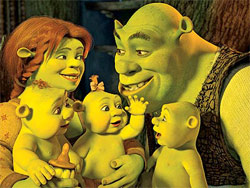 They're multiplying! Someone get the sarin!4. Pirates of Caribbean: At World's End (Buena Vista) $307 Million -Another year, another interchangeably bland movie based on the venerable ride at Disneyland. By the time this franchise has sunk Disney will have geared up for a feature-length Tiki Room movie. Expect to see Carlos Mencia in a bird costume and some slightly-effeminate male lead. Like Shia LaBeouf.


3. Transformers (Paramount) $308 Million - Michael Bay transformed a 20-year-old cartoon designed to sell toys to children into a cartoon designed to sell 2007 Pontiacs to adult children. A surprising number of critics choked out praise for a giant robotic scorpion chasing soldiers around an Army base. When spoken aloud, Star Shia LaBeouf's dumbass name is still sufficient to make me reflexively clench my hands into fists.

2. Shrek the Third (Paramount) $320 Million - Based on the third Shrek book by J.D. Salinger, Shrek the Third continues the story of a mealy wad of pop-culture references vomited downhill into a pit of cash. There is nothing redeeming about this film other than it now provides a counterpoint to the argument that Shrek 2 was the worst animated movie of all time.

With quality like that it should come as no surprise that Hollywood managed to shake off the revenue slump and post record returns this summer. Alas, summer is not forever. With the fall movie season drawing near the blockbusters are retiring to their caves to hibernate. They surrender their place in cinemas to a dreary collection of also-rans, holiday-themed trash, and "indie" movies as soulless as a rendered Megatron.