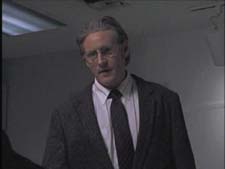 Woah, Sloane! Stay frosty, big fella! Don't get so excited!The agents raid Grey's home, but of course he's not there, since he's elsewhere sleeping uncomfortably. Well, actually, he's probably awake, since the raid occurs at night. That's right, they lay siege to vampire's home at night, rather than during the day when they know he'd have to be asleep. Whatever. They find a bottle of alcohol out in the open, which is a sure sign that Grey had a mortal with him. However, Grey has already wiped the bottle clean of Katlin's fingerprints. He did not, however, think to remove the crossbow bolts that he took from her from where he placed them - in the fucking cupboard. One of the agents just opens the cupboard, and - bam! - crossbow bolts. When the agents report back to Sloane about this, he is a little pissy, almost the to point of thinking about possibly considering a thorough evaluation of whether or not it would be appropriate to show some sort of facial expression. He begins to suspect Katlin of being a traitor and sends Jeff over to her house to investigate.

Grey and Katlin get into a discussion of what it's like to become a vampire. Just when it's about to get interesting (I assume), Jeff bursts in, crossbow at the ready. Grey leaps into defense mode and uses his incredible vampiric abilities to... flick off the lightswitch. That's his big plan - turning out the lights. The agency crossbows have fucking flashlights mounted on them! Exactly what was turning out the light supposed to accomplish? Come on, Grey, you used to work for the agency, you should know this stuff! Grey backs up against a wall and stands completely still. Katlin attempts to wrestle the Jeff's crossbow away from him in easily the worst physical conflict sequence ever captured on film, but it does no good. Jeff has a clear shot, but he misses anyway, most likely because he sucks. Of course, crossbows take some time to reload, so there's a bit of a wait as he gets ready to put N-5 out of his misery. As he's getting ready to shoot again, Allison enters and knocks him out from behind. After Jeff is tied to a chair, Allison tells Grey that she has finally broken free of Malgaard's power and she wants to help him to destroy the evil vampire lord once and for all before he gets ahold of the amulet that could give him the power to withstand the sun. It's complete bullshit, but Grey and Katlin go along anyway, insisting that they have to stop Malgaard before he gets the amulet. This doesn't make a lot of sense to me, personally. So far an inability to walk around during the day hasn't hampered Malgaard in the least. The agency only raids at night, anyway. And even if he got the amulet, he wouldn't be invincible. He'd just be another one of this movie's pussy vampires, except that he's be a pussy vampire twenty-four hours a day, every day. Woop for him. 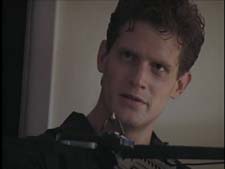 When you look at Jeff, you just know that even he doesn't like him.

On the roof of the Church of the Future, Malgaard gets the amulet. His powers are increased by a factor of nothing. Plus wearing the amulet around his neck makes him look like a gay disco dancer.

Undercover Girl shows up at Katlin's house after everyone has left. She reveals that she is a vampire now to Jeff and leaps on him, but unfortunately she spends too much time dry humping him and not enough time sucking his blood. She doesn't get a single drop out of him before Sloane shows up and sticks his cane through her back, causing her to make one of the most annoying sounds I've ever heard. It's like a yak during mating season, only without the charm. Jeff and Sloane head for the church, declaring their intentions to take out Malgaard and N-5 as a team. On the way, Sloane reveals that the vampire known as N-5 had been a student of his when the agency was beginning. It is a very emotional scene, as we can tell from the fact that Sloane takes off his glasses, thus allowing us a better view of his face as it doesn't move at all. 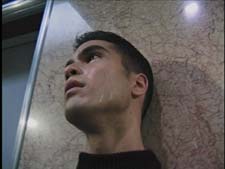 Things are not looking good for Stritch.

Grey, Katlin, and Allison arrive at the church. Once they're inside, Grey shoots Allison with a crossbow, killing her instantly. Grey's just got a way with the ladies. Stritch appears, ready to rumble. Stritch has proven himself to be a pretty formidable adversary. This could be good - Grey versus Stritch in an all-out brawl. So naturally, they never fight. Grey simply orders Stritch to go through the door where Allison had wanted them to go. Behind that door, two burly vampires are waiting with machetes to hack Grey to bits. Stritch cannot resist Grey's incredible mental powers and follows him into the bathroom - I mean, goes through the door in his place. The two burly vampires hack him to bits, not realizing until after it's all over that they've got the wrong guy, despite the large amount of available light and Stritch's protests. Malgaard doesn't hire anything but the best. Grey and Katlin take out the two burly vampires with crossbow shots. The sound editor really went to town on this one. The two shots are fired one right after another. However, apparently the firing sound and the arrow flying sound are two different tracks on the sound guy's CD of 1001 Cliche Combat Sounds, so rather than hearing two complete shots, we hear one crossbow fire, then the other crossbow fire, then the first bolt fly, then the second bolt fly. Right.

When Jeff and Sloane arrive at the church, Jeff tells Sloane to stay in the car and goes in solo. So much for the whole teamwork thing. Unlike back at Katlin's house, when he had a clear shot at close range and missed, now that he's stalking through a building full of the undead, Jeff is a one man army. He takes out one guard after another - all vampires - including one fat guard with a particularly saucy mug. So now not only can a few agents kill a dozen vampires during a raid, but one agent can successfully infiltrate a building teeming with vampires on his own without so much as a scratch. Man, these vampires are pussies. 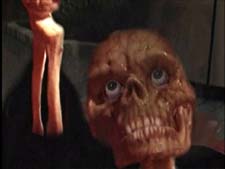 I must have done something to deserve this.

Grey and Katlin finally make it up to the roof, where Malgaard is waiting. He grabs Katlin and puts his sword to her throat. Just once I'd like to review a movie where a woman doesn't get a weapon pressed to her throat. Oh well, maybe next time. Malgaard explains that he is going to turn Katlin into a vampire himself and make her his slave, then he's going to deal with Grey. But Grey is a whiny bitch, so Malgaard decides to just kill him instead. As he's closing in for the slow, wussy kill, Jeff bursts onto the scene. He hesitates, unable to decide whether to shoot Malgaard or Grey, because he's goddamn retarded. Katlin calls out to him, distracting him long enough for Malgaard to knock the crossbow out of his hands and stab Katlin in the chest. But while Malgaard is turned away, Grey picks up his own fallen crossbow and shoots Malgaard. But shock and horror! Malgaard is so ancient and powerful that he doesn't die the second he gets hit with a crossbow bolt like every other vampire! Jeff has to toss him off the roof. After a few shots of falling that are in themselves laughably bad, Malgaard hits the pavement. After all that, he doesn't even get a dignified death. He is laying there in a massive pool of red special effect that is probably supposed to be blood, some shitty orange CGI smoke rises, and two different incredibly shitty CGI images are superimposed over him, trying to make it look like he's dissolving. If it hadn't been done already, this one sequence should be enough to make all of William Hopkins' dreams of this movie being taken seriously blow away like a fart on the breeze.

Up on the roof, Grey drains Katlin of blood so that she will return as a vampire, rather than dying from her stomach wound, brain tumor, or being crushed due to the constantly increasing size of her breasts. Jeff allows Grey to escape, as long as he leaves Katlin there. Grey reminds him that she's going to stay dead for a day and all that jazz, so Jeff allows Grey to escape, as long as he takes Katlin with him. It's a quick exchange, yet it somehow makes both men look like morons. Simply beautiful. The next night, Jeff resigns from the agency. On his way out of the building, he runs into a vampire Katlin and Grey, who say their goodbyes. Then the three of them just stand there for a while. After a few awkward seconds of this, Hopkins has the decency to finally end the movie.

"Sleepless Nights" has a number of things in its favor, such as some original music that doesn't suck and a steady supply of crossbows. Sadly, these advantages cannot help a movie that is hopelessly weighed down by a heavy-handed script, emotionless action, and godawful attempts at special effects. The sound is off throughout the entire movie. The dubbing is so bad, it makes it look like the movie was originally made in another language. In some scenes, not only is the dubbing off, but all of the voices clip horribly, so you get to try to match which jarbles of sound go with which improperly timed mouth movements. Aside from a plethora of logical gaps, the movie at least has a sense of continuity. However, the plot could be without a single hole, and it would still be boring as hell because the vampires - excuse me, necromorphs - come across as inferior to humans in every way. The only one of them who seems to have lived an abnormally long time is Malgaard, and even he doesn't exercise any sort of impressive power. Really, they're just pasty humans with odd diets and bizarre sleep schedules. Let's face it, they're college students. This has got to be the only vampire movie I've ever seen where I didn't root for the vampires to win. Don't get me wrong, I didn't want to see the humans win, either. I think the best case scenario for this movie would have been for Dr. Hogarth's headless body to rise as a zombie and go on a killing spree. Oh well, maybe in the sequel.