Katlin finally goes to see the company doctor. It seems she's been having constant headaches lately. Katlin, that is, not the doctor. The doctor may have plenty of other issues, one of which might explain the human skull she leaves lying around her desk, but having headaches is not one of them. When the doctor arrives, she gets right to the heart of the matter by dancing around the word "tumor" like it's a fucking maypole. The point is. Katlin only has a few months to live. Also, she spells her name wrong. 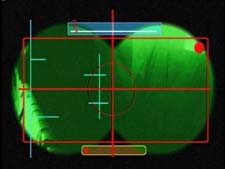 Granted, I've never used night vision goggles before, but I have to imagine some of those lines are superfluous.

That night, Katlin lies to Jeff and says she had to reschedule her doctor's appointment. Then she pours herself a dainty glass of Jack Daniels and goes out. And where oh where might she be going at this time of night? To find N-5, that's where. She tracks him down to a dilapidated manor. N-5, like all vampires, can never remember where he put his keys, so rather than risking locking himself out, he just leaves the door unlocked at all times. Katlin waltzes right inside in full agent gear, including night vision goggles and a crossbow. The goggles are an especially nice touch, since it's really not all that dark in there. I'm not saying I'd want to do a crossword in there or anything, but the night vision goggles might be a bit extreme. N-5, or as we know him, Christian Grey, gets the drop on her and uses his amazing vampiric prowess to rip the crossbow away from her incredibly slowly and clumsily. You'd think he'd be a little more careful with it. After all, that's a crossbow he's got, there. If that thing went off accidentally and shot him in the foot, he'd die instantly. Katlin tells Grey she's not there as a hunter, which would obviously explain the loaded weapon, flak jacket, and night vision goggles. She offers him a deal - she will be a spy for him within the agency and let him know when they are going to raid his home if he will make her a vampire. Grey flat out refuses, saying he doesn't need a spy who will only be alive for a few months. It's a remarkable observation on Grey's part, since Katlin hadn't actually mentioned her disease. At least, I think it's pretty impressive. No one else mentions anything about it. She keeps pestering Grey about her proposal until he decides to show her what being a vampire is all about. 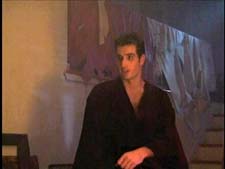 They head to a bar. Grey approaches a trashy blonde. He just stands there and stares, and for some reason the blonde gets up and follows him into the bathroom. This is the first sign of vampires actually possessing any sort of otherworldly powers. Or, alternately, it's a sign of the blonde being a big slut. I'll leave that for the philosophers to decide. Once he gets her into the bathroom, Grey lowers her to the floor and begins to feed. After a while of this, Katlin walks in nonchalantly, as if she'd seen this sort of thing a thousand times before, which is actually quite possible if she's ever seen any other vampire movie made since the dawn of time. Grey tries to show her the horror of vampiric existence by snapping his head up, baring his fangs, and making the stupidest face known to man. I guess he's trying to say, "if you become a vampire, you'll look as lame as I do," or something. Whatever it is, it doesn't work. So instead of teaching Katlin a lesson about the value of her humanity, Grey just gives up and accepts her proposal. 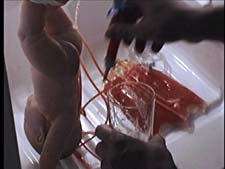 Okay, the fridge baby's cool. He can stay.

Back at the agency, a few of the agents try to crack the connection between Malgaard being sighted on the scene of Dr. Hogarth's murder and the fact that the Church of the Future is still going strong. One of the agents decides that she will go undercover. Later, at the Church of the Future HQ, Malgaard babbles on and on about how he became a vampire back when he was a templar, then he instructs Allison, who is still his minion, to lure Grey to him. The two parts of speech are by no means connected. His instructions to Allison actually advance the plot. All that templar crap is just filler. Ooh, sorry, I mean "character development." To the movie's credit, there is one amazingly cool shot in this scene. Malgaard opens a mini-fridge he's got in his office and we see that he's got a baby suspended upside down in there with an IV tube stuck in it. Malgaard fills his glass with a syringe attached to the other end of the tube. Now that is badass. It's pretty clear that the baby is just a doll, but even still. You'd think a monster capable of doing such a thing would have to be pretty scary. You'd be wrong, but at least the baby thing is still cool.

Stritch walks in and says that a woman has arrived looking for the church's teachings and that she fits the psychological profile of one of their members perfectly (uh, Scientology much?). We transition to a sterile white room where Undercover Girl is waiting. She's disguised herself by cutting her hair a couple inches shorter and putting on some ugly clothes. This is clearly necessary, as I'm sure Malgaard and his people have detailed files on ever single agent out there. Right. I also believe in elves. A nurse enters and gives her a pill. However, Undercover Girl is a crafty one and doesn't take it. A video about the Church of the Future starts playing on a TV in the room. It's obviously based on the Dianetics video (uh, Scientology much?), but somehow made a little more insulting to my intelligence. For instance, the motto of the Church of the Future is, I swear, "Won't you join us in the future?""Won't you join us in the future?" Hmm... so that's what an aneurysm feels like. Kinda tickles. When the video ends, there is ridiculously loud static for some reason, and Undercover Girl puts a hand to her head as if she were in pain, only wasn't quite a good enough actor to show it. While the static is still going, Stritch enters the room and reveals that he knows she's an undercover agent. She tries to strike him with a chair, but she sucks at it. While she is distracted playing lion tamer with Stritch, Malgaard enters from behind her through a hidden door, grabs her, and bites her neck. Okay, so Lord Malgaard, the most fearsome of all vampires, wanted to bite this girl, and he had to weaken her resistance with a video and have her distracted by another vampire to do it? That pretty much negates the coolness of the baby thing, right there. And what was that pill for? If she had taken it, would she have passed out? Would Malgaard have been able to bite her then, or would he still have needed help? What a puss. 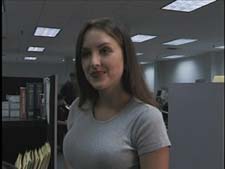 I swear, her breasts are bigger in every scene.

Katlin tells Grey that the agency is about to raid his digs, so they both go back to her place. Once there, Katlin starts going about the business of making the place ready for him and cleaning herself up and such, while Grey stands fixed in one spot. He doesn't even move his head as they talk. It's so unnatural that it could only be justified by one of two possible explanations: either (A) William Hopkins actually told Grey to stand perfectly still and not change his position or expression in the least or he'd be fired, or (B) Hopkins was out of the room and they decided to shoot this scene in his absence to surprise him for his birthday. At last, the scene ends when Katlin gives Grey a body bag to sleep in so he can stay protected from the sun. We then see Grey and Katlin making out. Thank God this it's a dream sequence. If they started going at it, any claims this movie has to having any sort of depth to the characters would go right out the window. When Grey wakes up from his dream, we see that he is sleeping in the body bag on the floor next to Katlin's bed. Now, I understand why he was sleeping in the body bag, but what I don't understand is why he put the bag on the floor. Would it have been so hard to stretch out the bag on a couch? The way I see it, as you go higher on the food chain, you get more luxuries. Humans sleep on comfortable beds, why can't a vampire even get a damn sleeper sofa? It's unjust, I tell you!