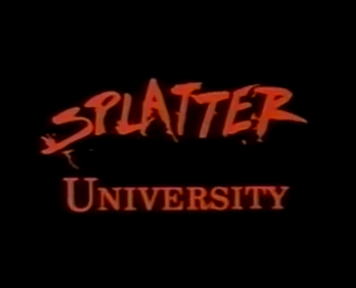 Overview: A bright-eyed young sociology graduate discovers she's absolutely godawful at teaching, but fortunately for her, there's a killer running around town to distract from her own massive failings.

The Case For: If you can stay awake until the ending, there's a brief moment of actual entertainment. The character list includes a wide array of loudmouthed assholes who are prime murder fodder.

The Case Against: Every single death is pretty much the same and involves liberal amounts of strawberry jam and melodramatic moaning. The soundtrack consists mostly of the spooky electronic synthesizer sounds of Optimus Prime passing a kidney stone with his motor oil. None of the loudmouthed assholes actually fucking die.

At this point in our video-based masochism careers, we could probably teach a master class in how to make an unwatchably bad slasher movie. Lesson one would be to never think about the direction of the movie as a whole, but instead to focus on one tiny, irrelevant detail, and then make sure you fuck that up too. In the case of Splatter University, director Richard W. Haines found his cinematic white whale in keeping meticulous track of the passage of time. And so, in the very first scene, we're greeted with this:

Ah, feel the rich world building wash over you. An orderly quickly finds William hiding in the broom and knife closet, but his hard time in the Three Stooges Memorial Psychiatric Ward[1] has taught him to instinctively go for the balls in self-defense, and so begins a lifelong career of really half-assed stabbings and occasional nut shots. Oh, and of being totally invisible apparently, because he just strolls out the front door of the hospital in his blood-stained white uniform.

THREE YEARS LATER, as we are helpfully informed, some anonymous teacher lady gets a door-to-door stab-o-gram which is just plain lazy. Seriously, he stabs her once in the gut and she's dead in about 15 seconds. Either his knife is coated in the venom of a rare and deadly desert snake, or this movie sucks. Or both, really. Don't worry though, this was just setting the stage for the real movie, which begins with another caption so profoundly stupid that we couldn't possibly have made it up:

Somehow we slipped all the way from "TWO FORTY THREE P.M." to "The next semester, yesterday." Maybe it's not a great idea to keep meticulous track of time passing in your slasher movie if you don't actually know how to say time words.

More importantly, we've finally arrived at the titular Splatter U., also known as St. Trinian's School for the Criminally Coiffed, home to some of the worst examples of '80s hair syndrome ever caught on film. Especially this pair of titanic hair mountains. Christ, them making out is like a fucked-up '80s version of the hair mating from Avatar, except there are no people and it's just two giant wigs going at it. Brrr.

Getting to know the people underneath the hair is not an improvement, because almost every student at St. Trinian's is a hard-drinking[2], obnoxious future sex offender and/or domestic abuse Cops episode star. Don't worry though, you'll be glad to know that none of the really annoying characters ever get killed, so they're free to spend the entire movie doing shit like this:

[1] Nobody takes the Stooge Ward rotation seriously until they get there, but those guys have seen some of the worst cases of terminal Curly Joe-ism you can even imagine.

[2] To be fair, we'd be shotgunning twelve-packs of cheap beer at 10 AM every morning too if we either looked like or had to look at any of these people regularly.