Nicolas Cage, the reigning king of unwatchable remakes, helps the Pang Brothers deface their own 1999 film Bangkok Dangerous. In the original, the main character was a deaf hitman. Cage's Joe isn't physically handicapped in any way, unless the oil-smothered sea mammal of a hairpiece perched above his grimacing face counts as a disfigurement, but the movie itself is completely retarded. 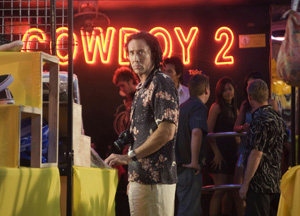 "What do you faggots want?"Joe describes Bangkok as "corrupt, dirty and dense," which also serves as an apt summary of Bangkok Dangerous, assuming the following definitions: "corrupt" as in ruined beyond usage, "dirty" in that the camera seems so covered in grime that it's opaque, and "dense" meaning that it's astonishingly fucking stupid.

He arrives in the city for "one last job," having learned nothing from the thousands of previous hitmen and heisters who perished during their final money grabs. Many criminals would have enjoyed long, leisurely retirements if they were content to settle for their penultimate scores. Joe fits the "rebel who plays by his own rules" template, except: He completely disregards the self-imposed rules his voiceover makes such a big deal about establishing, and the film gives him very little against which to rebel.

Toward the beginning of the film, Joe claims to live by the following commandments:

He spends the rest of the film flouting his own laws -- having slow-motion internal moral debates; making a new buddy and pursuing an implausible love interest, both of whom become dangling loose ends; and staying in Bangkok way too fucking long -- even though his narration naggingly reminds him of their existence, chronicling them in reverse order at one point in a desperate attempt to jog his memory.

Also, usually lone wolf/maverick/loose cannon active protagonists confront a by-the-book police chief who attempts to thwart their clearly effective vigilantism, much to the frustration of the viewer. "He gets results, you stupid chief," as Homer Simpson once screamed at the screen. Joe experiences absolutely no conflict during the first hour of the film, while completing three complication-free executions. The only moments of hesitation occur when he halts for the standard "killer with a dormant conscience pulls out a gun, sees a kid looking at him, thinks about his life" scene, which goes on forever, and when he swerves to avoid hitting that same boy on his way back from the completed hit, which causes him to scratch his arm. Sometime one of these tortured anti-heroes should look at the ubiquitous kid, engage in the usual staredown, then just gun him down while screaming "don't judge me, you little fuck." Perhaps this could happen in the next "dark" Batman installment. 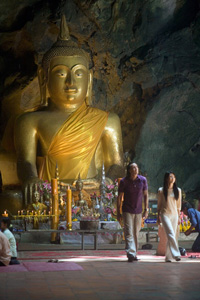 "So many social engagements, so little time."While attempting to purchase disinfectant for the scratches, Joe falls immediately and inexplicably in love with a deaf-mute pharmacist, the Pangs' clumsy way of preserving a trace of the original storyline. She can't hear his speech, and also she can't read his lips, because she doesn't understand English. While she laboriously pantomimes how many pills he should take for his injury, which is, incidentally, one of the wussiest in action-film history, delicate piano music plinks in the background, enhancing the preciousness. The two go on several bizarre nearly silent social outings, including tea time at her mom's house, a solemn visit to a Buddhist temple, a dinner date during which the perennially sweaty Cage learns Thai food can be spicy and perspires even more than usual, and a dumbfounding scene where she wordlessly teaches him how to pet an elephant. To clarify, this isn't a montage: Bangkok Dangerous actually devotes four full-length scenes to this courtship, which might make sense if this were a high-concept romantic comedy rather than an alleged action film.

Joe further fleshes out his tender side by teaching a pickpocket named Kong the art of assassinry. Kong bristles at Joe's gruff manner at first, hurling the subtitled insults "duck fucker" and "birdshit foreigner" (an actual Thai term, though it's a slur directed at mixed-blood residents, and it's doubtful Kong mistook Cage for half-Asian). Eventually, they bond by doing push-ups together, having knife fights and shooting at watermelons.

Their first hit as partners goes slightly awry, as Joe and Kong get waylaid by a pushy vendor in an adjacent canoe, an unforeseen complication when attempting to kill someone in a crowded area known as the "floating market." When they return from the successful execution (after an interminable boat chase -- see, a car chase is genre standard, but Bangkok Dangerous is all about innovation), Joe and Kong tune in to the ever-popular channel Plot-Device TV, which shows footage of a politician Kong calls a "good guy" who "fights bad guys and helps the poor." Coincidentally, Joe has one last unknown assignment. Whoever could be his target? 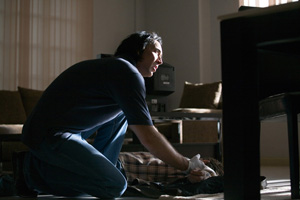 "Put the bunny back in the box."Bangkok Dangerous delays the inevitable by returning to the Joe/Deaf Girlfriend subplot. (He learns her name is Rain during a gesture-filled, Miracle Worker-type scene during one of the film's many downpours.) The latest Joe/Rain date ends with her giving him a note that reads "I am happy together with you." The happy togetherness ends soon thereafter, when Joe kills two thugs who attempt to burgle him, and Rain remains oblivious to the struggle behind her back until their blood splatters her all-white outfit. She never speaks to him again, or signs to him, or whatever, because apparently in Bangkok it's considered incredibly impolite to defend yourself from armed robbers.

Joe goes home and looks at an elephant drawing that's hanging trunk-up, because Kong told him it was bad luck otherwise. He stares for a while, then stares in super close-up, the camera zooming in on every wrinkle. He breaks the frame and burns the picture, much like he destroyed the photos of all previous victims. Perhaps the elephant, the one he and Rain caressed so gently, will be his final target! The suspense dies when he opens an envelope that reveals the next cadaver-in-waiting. Just in case viewers wouldn't get the connection from a vocal flashback to Kong's testimonial, Joe's employer sent a newspaper clipping of the "good guy" politician smiling with children as the identifying "kill him" photo instead of the usual candid walking shot.

After yet another echo of Kong's "good guy" advocacy, Joe lets the sainted politician (and an elephant) pass unscathed during a motorcade, but not before doing so much mulling over his decision that viewers get an eternity to familiarize themselves with the brand name of the sniper rifle he's holding. "Bushnell: Because sometimes even beloved leaders must die" tops the movie's list of subliminal product-placement pitches, topping "The Sheraton Hotel -- for when it has to look like an accidental death." When fleeing the scene of his aborted assassination, Joe grabs a bystander's hat for disguise purposes, not realizing that the easiest way to alter his appearance would be to rip that ink-blackened squid of a wig off his skull. 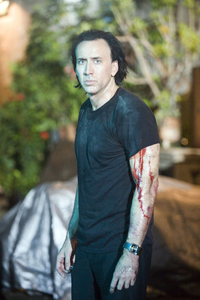 "I can't believe I got shot. Isn't that fucked up?"When Joe arrives at home, he discovers his change of heart didn't endear him to his employers, who've sent henchmen. As a singing sage once prophesied, "One night in Bangkok and the tough guys tumble/can't be too careful with your company." Fortunately, Joe knows that if you're ensconced in your bathtub, you can strategically blow up your house, killing all other inhabitants while remaining safe in your ceramic cocoon.

Joe invades the water-bottle warehouse that serves as his employer-turned-enemy's hideout, leading to a shootout where he and his adversary fire at each other through a thin row of jugged liquid. Joe also does the mandatory "leap while firing guns with both hands" move, or maybe he only fantasized about doing so, because in the next frame he's standing upright as if nothing happened.

Joe finally tracks down the portly crime boss, but in the process he finds himself surrounded by Bangkok cops. Short on ideas, he interprets the movie's self-spoiler tagline "There's only one way out" in the most self-destructive manner possible. People who find themselves stuck at a showing of Bangkok Dangerous might find themselves tempted by the same drastic solution, especially if they brought a gun to the theater, just in case. But just remember that there are actually multiple convenient, well-lit exits available at the multiplex. Just head for the nearest neon sign, then incinerate your ticket stub. Know when to get out. Erase every trace.