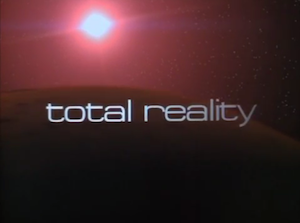 Overview: We remember something vague about going back in time to stop a self-help book from leading to space Nazis and the total destruction of Earth, but mostly we just found ourselves wishing the characters would just time travel past all of the bogus pseudo-military horseshit and pointless dead-end political intrigue.

The Case For: If you're a fan of Star Trek IV, you might enjoy the part of Total Reality where an '80s woman reluctantly drives around in her pickup truck with a group of future astronauts on a mission to save future Earth.

The Case Against: On the other hand, you probably won't enjoy the fact that William Shatner has been replaced with action C-movie also-ran David Bradley, the future astronauts are trying to murder someone instead of save the whales, and instead of Spock there's a manic skinhead who screams obscenities at the '80s woman from the back seat of her truck. 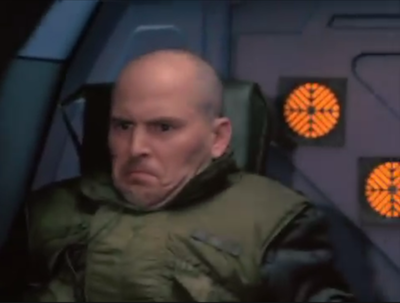 Everything about Total Reality is just a goddamn mess, and we're saying this as people who have seen Total Retribution and lived to tell about it. Let's see here, the movie is entirely about time travel but there isn't any for a solid 30 minutes, every single character inspires nothing but white-hot burning hatred, and the action lead is David "American Ninja" Bradley of Cyborg Cop infamy, who sheds his fanny pack for this outing and therefore has no distinguishing personality traits of any kind. And we haven't even gotten to the really stupid shit yet.

We have to start with the whole time travel thing, which is pretty familiar from Last Lives: a totalitarian future government sends someone back in time to stop some outlaws from turning 1980s Earth into their own personal game of Grand Theft Auto. Total Reality really amps up the ethical confusion in this already terrible premise, by making all of the people who travel back in time kill-happy assholes who have no moral compass. Also there's some occasional fish-out-of-water stuff ("what's a truck?") which is both terrible and strangely intermittent. Oh, and great philosophical lines about the deep implications of changing the timeline, great dialogues like "After tomorrow, they will never have existed." "Neither will we!" But don't think about any of that too hard, have some explosions instead!

As you can see, everything and everyone in this movie just explodes into a ball of flame at any opportunity. And thank God for that, because aside from the pyrotechnics the only action is provided by David Bradley, whose tedious presence makes us long for the commanding gravitas of a Michael Dudikoff. He's also supposedly the hero of this picture, but his great moment of heroism involves shooting his commanding officer in the space Nazi infantry, a solid minute after he kills a shipload of innocent women and children, so we can't say we feel very inspired.

The only thing worse than the (lack of) action or the hamfisted time-travel stuff is the utterly insane premise that the future fascist government that destroyed the Earth and conquered the galaxy is based on a self-help book. Just try to imagine a political movement based on a fucking self-help book, without immediately cracking up. Although the only quote we actually get to hear from the book has to do with "running your life by controlling everyone around you", so maybe it really is the Mein Kampf of self-indulgent pop psychology, somehow.

There are some decent spaceship effects in Total Reality (especially compared to that other spaceship movie from 1997), and some of the many, many explosions looked fairly expensive. But as a sci-fi movie, or an action movie, or a watchable movie, everything here just misses the mark. Speaking of which, nobody in this movie can hit the broad side of a space-barn, which maybe explains why everyone dies in explosions instead: