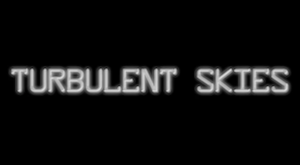 Overview: A 747 with a fancy new autopilot (with sleek, futuristic features such as "tells you to wear a seatbelt" and "has a blinking light") gets infected with a computer virus on its maiden voyage. Tragically, the plane is full of mouth-breathing morons, so nobody can find the off switch.

The Case For: You could make a drinking game out of how many Airplane! lines you can squeeze into the dialogue verbatim.

The Case Against: It's an "action thriller" but the climax involves jimmying a fusebox open with a screwdriver, so there's that.

The nice thing about unoriginal shlock like Turbulent Skies is that we can very efficiently describe the entire movie from start to finish in terms of the real movies it's ripping off. Turbulent Skies is Airplane! meets Executive Decision, with both Robert Hays and Kurt Russell replaced by singular B-movie uberhunk Casper van Dien. Add some really awkwardly forced dramatic tension and just a tiny dash of The Rock, and if you close your eyes you can pretty much picture the entire movie.

If this sounds like a terrible idea to you, that's because it is, but that didn't stop inveterate crap-monger Fred Olen Rey from throwing together the most half-assed, unnecessary, tension-free vehicular "action thriller" since Speed 2: Cruise Control. On the bright side, this movie stars not only Johnny Rico himself but also that really smug guy who bangs Johnny Rico's girlfriend in Starship Troopers (Patrick Muldoon), so it's like a fun little mini-bro-reunion, a.k.a. the high point of both of their careers (now there's a depressing thought).

Just in case you're one of those people with a "real life" who hasn't seen the already pretty ridiculous films this one is ripping off, here's the plot in one sentence: when both pilots on a big fake airplane get themselves idiotically killed/incapacitated 5 minutes into their flight (Airplane!), hunky renegade scientist Johnny Rico is brought in on another, smaller airplane to save the day in mid-air (ala Executive Decision). Simple, right? And yet, despite having two other complete films to crib off of, Turbulent Skies still managed to come up with the worst possible execution of that premise.

The centerpiece of this riveting sky-farce is the computer autopilot, which looks like a cross between a scrapped alpha prototype of HAL 9000 and the world's most complicated smoke detector. But wait, it's not just an autopilot, it's the CD-70 system! What does the CD-70 system do, exactly? Well, aside from looking like a painted-over ashtray with some christmas lights glued to it, it seems to do everything normal old-fashioned autopilots do - really, really badly.

EVIL FLASHING MODE ENGAGED. PLEASE FASTEN YOUR SEATBELT.Added to the mix are Federation Fleet Ace Zander as marketing doofus/chauvinist mega-shithead and his dad, googly-eyed CEO of Generic Sorta Evil Greedy Mega Corp LLC, who decide to take their prototype magical omnipotent AI mystery box for a joyride at 30,000 feet to impress a couple of sweaty Greek investors. And of course, to up the ante, let's cram a harem of typecast perky braless walking harassment lawsuits diverse group of formidable professional women colleagues into the cabin so we'll all be that much more relieved when everybody doesn't die. No worries, coolax bro - Zander's dad installed all of the latest failsafe systems into the jumped-up Nest thermostat that's flying them around, like the following (which we swear that we're not making up):

Meanwhile, on the ground, Johnny - lead designer of the CD-70 and compulsive shirt-unbuttoner - is very upset because, like the reckless, headstrong adrenaline junky he is, he wanted to do an unmanned test flight first. You know, because just letting an untested robotic flying jet-fuel bomb meander aimlessly through high-traffic US airspace with no supervision is totally an acceptable risk as long as there aren't a handful of worthless people on board. Typical bullshit from that hotshot Zander, he gets to be up there in the air, groping and/or chugging everything in sight while Johnny is stuck down on the ground, nothing but his rifle and a thin layer of Kevlar between him and being giant neon mutant ant food. FLEET DOES THE FLYING, MI DOES THE DYING, RIGHT YOU SMUG BASTARD?! LISTEN UP APES, WE DROP IN --