"Hey you [adjective] have you ever had a(n) [animal] [verb] your [delicate body part]? [Expletive], then it's going to [adjective] right out your [orifice], [juvenile insult]. Ha! [obnoxious fucking noise that people inexplicably pay Will Ferrel to make.] Ballsack. 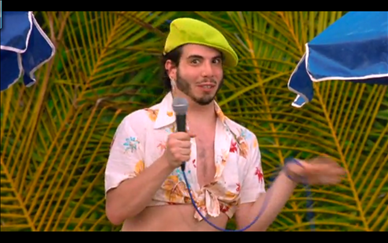 Of course it wouldn't be a surfing movie without asurfing competitionbunch of footage of stunt doubles going forward on surfboards! So we have another entertaining sex-related character to eventually tell us when the good guys win and put us out of our misery: a real live homosexual, "straight" from the aisle of Fagrabia! Gays may be an abomination in the eyes of the LORD, but it sure is rib-ticklin' to see one dancin' around up there, wavin' his wrist around an' lisping an shovin' a whole gosh-durn colony of little critters up his blasphemy of a rectum right there on stage!

Well okay he didn't literally do that, but I wouldn't be surprised if he had. Surf School is horrid enough to strike a nerve with me -no small feat, seeing as I'm the kind of person who can read phrases such as "14 inch dragon cock" and merely laugh like the bitter shell of a harpy I am. It isn't just passively bad, but it 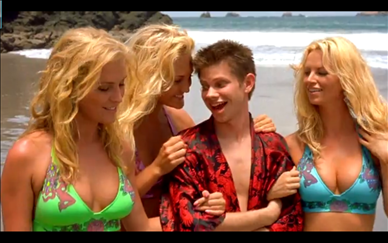 A happy ending, just like e/n threads! fucking assaults you with its utter failure in every aspect of its composition, from its tape-delay acting to its [bodily fluid]-spattered screenplay.

The only thing I'll give Surf School is that it certainly doesn't skimp on high quality half-naked people, arguably the only things that kept me going through the movie. I can understand why Joel went to the effort. Seeing as the rest of the movie is about as pleasurable an experience as a botfly infestation, at least he can make $5 off of the one teenage boy in America who hasn't figured out how to type NAKED LADIES into the Firefox address bar.