Actually, it's Good the Martians are Using the Heat Ray

It has taken me three days to make it from Horsell Common to Central London and I just can't deal with white men anymore. Their sense of entitlement is out of control and it is impossible for me to care about anything that happens to them. By now you've probably heard about the cylinder that landed on Horsell Common.

I was one of the first people there because I like to do my scream therapy where I don't have to hear complaints that I woke up babies. A metal cylinder crashes from the sky onto Horsell Common. I want to go take a closer look. Well, the government, caring nothing about intersectionality, creates a cordon of cis hetero white men around the first object to come from a place without a patriarchy.

One end of the cylinder began unscrewing and these big men were all brandishing their guns. Could it be friendly? Could she be a mother? They didn't wait to find out and opened fire. Too bad for them, the huge tripod fighting machine that appeared was immune to their bullets. It fired a heat ray that instantly turned every man it touched to fire and set the trees ablaze. 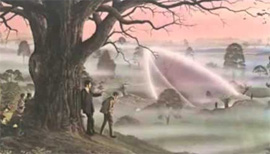 I went home that night and tried to watch some Netflix but I couldn't stop thinking about all those soldiers who were incinerated and how that was Good. Those soldiers would have been deployed most likely to Africa or India, maybe to Ireland, but one thing is sure: wherever those soldiers went they would not have respected fair trade practices. It's Good the Martains are using their heat ray, but I didn't realize how Good until the next day.

The tripods were stomping their way towards the heart of London and there was a stampede of people fleeing through the streets. There were no allowances for the differently abled and I witnessed men shoving women and children aside. What the men thought was an advantage turned quickly to equality as the Martian did the Good heat ray and turned everyone crowded in the streets into smoke. As the ray flashed again and again, I realized that at last the Martians were deconstructing thousands of years of male dominance.

I saw some children from one of the wealthy schools go up like gunpowder. I'm supposed to care that a bunch of white children got incinerated? After what happened last week when the police broke the strike at the textile factory? Really? I'm not entitled enough to even meet those kids.

Oh, and then Big Ben melted from tripod heat rays. I know, right? Big Deal, more like it. Some people actually stood and watched the Martians blowing up Big Ben and all I could think was, "Must be nice to have a job that lets you take a break to watch Big Ben get destroyed, because thousands of working poor can't afford to take five minutes for a meal, let alone to watch a boring landmark be melted down to slag." 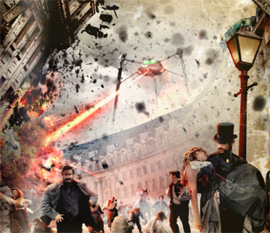 I recognize that the Martians are incinerating hundreds of POC, but this is what equality feels like. Race is irrelevant to the Martian. The Martian certainly doesn't care whether it is scooping up a Hindu, Muslim, Christian, or Reiki channeler. It doesn't matter, because it wants to inject human blood into its alien veins, and I'm Glad Of It.

I escaped from London and met an artilleryman who had somehow escaped from Horsell Common. He told me that he had a plan and that mankind would survive and build a new world. UGH like I need him mansplaining to me. I told him that I saw a few problems with his plan, like nobody is asking for MANkind to survive, because man is far from kind, and they already built this world and look how it turned out. He didn't understand what I meant, so I linked him to a storify of tweets I made about Top of the Lake.

By the way, the artilleryman was white. Big surprise. The Martians are more of a gray color, so I consider them closer to understanding intersectionality than some ignorant Cis White Male who had a job loading bombs into cannons to kill POCs for wealthy autocrats.

If you're pissed at me for not performing grief over human civilization dying, I'm assuming your mom didn't love you and you're taking it out on me.