Overview: When God delivers a message to a blind homeless man, he embarks on a journey through the supernatural underworld of New York City in order to save a child and probably do some other stuff, too.

The Case For: Clever use of genuine NYC street performers to inject some talent into this movie.

The Case Against: The plot is so confusing, you may not even notice that it has no resolution.

I admit that I have a major soft spot for movies that suggest there may be a world beyond the one we see. Night Watch, The Matrix, Spirited Away, Billy Madison - all of these fire up the imagination and suggest that untold adventures could be occurring around us at all times, and we could become a part of it if only we knew where to look. That is why I so thoroughly enjoyed Acid Rain, which takes the seemingly commonplace events that occur on the streets of New York and gives them a new, often sinister significance. It suggests that behind the vacant, cow-like stare of every homeless person, and underneath the dreadlocks of every shirtless street performer lays the heart of a supernatural soldier, waging a secret war for something vague and unnecessary. This movie really touched something inside me, and I owe writer/director/producer Albert Johnson a debt of gratitude for that service.

Unfortunately, then I realized that Albert Johnson is a cad. I'm not saying that as some sort of generic, comically-British insult. I mean it quite literally. He's a cad. A bounder. A tosser. A blackguard. A heel. A hound. A scam artist. Not to be trusted under any circumstances. While you're watching the right hand, he's making a terrible movie with the left, and that's just what he does here with Acid Rain. He drags you into his seedy world of know-it-all hobos, easily amused tourists, and angel-demon-spirits who just want to be loved, and while you're drinking it all in and wondering if you've just missed what's between the cracks in the sidewalks all these years, you don't even notice that the plot not only doesn't make sense, but that its inconsistencies actually necessitate the deaths of eight million people. So that's great. 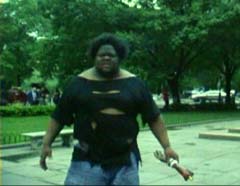 Way to ruin everyone's good time, Fatty.Acid Rain begins with footage of various street performers from the parks and subway stations of New York City. In other words, Albert Johnson pads his movie by stealing free entertainment from people with legitimate talent. It's actually a pretty decent homage to the many hardworking men and women - including the inimitable Midget Michael Jackson - who provide amusement to thousands of passers-by every day for a few coins. Sadly, this touching tribute is brought to a screeching halt when a breakdancing performance is interrupted by a fat black guy who rips an arm off of one of the dancers. Sadly, while the dancer is quite skilled at pumping up a crowd, he's not so good at tucking his arm inside his shirt to fake an injury, so it honestly looks less like the fat guy just ripped his arm off, and more like the fat guy just caused him to sprout a new arm, which is actually a pretty neat trick.

Elsewhere, a blind homeless guy named Alex sits in his cardboard box, thanking God for the sandwich he is about to eat. Then someone steals the sandwich. Undaunted, Alex fishes an apple out of his pocket and thanks God for that, because while he may not have a sandwich, he still has a bounteous apple, and the loving protection of corrugated cardboard, and that's enough for him. Sure, it would be nice if he could see, but that would just be gravy. But if vision is gravy, then God must be holding a ladle, because just then the Almighty takes out Alex's white contacts - I mean, restores his sight. 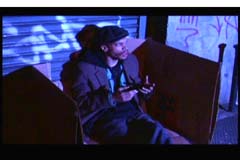 Poor blind Alex... nobody has the heart to tell him his box doesn't have a roof.Albert Johnson went for the New Testament God, and so God (who, if his voice is any indication, is a real weenie), tells Alex that in exchange for his sight, he must deliver a message to someone named Matchet, a.k.a., "The Evil One." This message comes in the form of a floppy scroll with some sharpie scrawled on it. Hey, don't be so surprised. Even God likes to Write Out Loud." Oh, and God also tells Alex that in three days, he is going to destroy New York City. Okay, so maybe he's the Old Testament God, too. Or maybe the New Testament God just felt like being a jerk.

Charged with his mission, Alex goes off in search of Matchet. Of course, since God gave him no information to start with other than a name, it's going to be tough. Shortly into his journey, Alex comes across a TV reporter giving a live report about some recent child abductions. Alex shoves his way in front of the camera and lets all the viewers out there know that they have three days to get the hell out of New York before God takes it to Funky Town, and not in a good way. 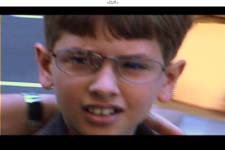 It's okay if you want to smack Petey. We all do.

Meanwhile, a nice, white family of tourists wanders around Times Square, gawking at the various street performers. Their little bespectacled boy, Petey, mistakes a flannel-wearing Jesus Yahoo ranting about the end of the world and eternal salvation for a performer, but his father corrects him that no, that's not a performer, that's just a crazy person, and escorts him off to watch a contortionist. Someone should probably tell these people that (a) it's not a great idea to call crazy people crazy to their face, and (b) they may want to try doing more with their time in New York than watching some guy in checkered spandex put his crotch over his face. The fact that some random guy with "He is coming" written on his forehead wanders up to the family and shoots himself in the head just lends more credence to my theory that they should maybe go check out the Statue of Liberty or something.

After witnessing a public suicide from close enough to smell the splatter, the family finally decides that perhaps they should take their vacation to another part of the city. Fortunately, none of them seem that bothered by what they just saw, least of all little Petey, who is only interested in his toy ball. When the ball gets away from him and bounces into a passing subway car, Petey chases it. His parents realize too late that their child is zipping away on the F train, and there isn't a thing they can do about it. It's every parent's nightmare. Luckily, every parent's dream is about to come true. 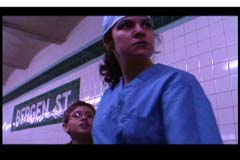 Worst nurse ever. Trust me.That's right, lost little Petey is found by a rambling, half-crazed homeless man who thinks he's on a mission from God. Yaaaaaay. Yep, it's our friend Alex who comes across Petey as soon as the boy decides to get off the train. And it's a good thing, too, because no sooner does he step onto the platform than a psychotic nurse tries to kidnap him. Say what you want about New York, at least it's not lacking in criminally-intentioned medical professionals. Alex frightens her off using his powers of homelessness, but he is immediately outmatched when some bald dude with black eyes appears out of nowhere and demands the boy. To make matters worse, Bald Dude has an accomplice - the fat, arm-ripping black guy from before. Alex runs for it, with little regard for the fact that Petey is like three feet tall and may have some trouble keeping up. This, for the record, will remain Alex's primary method of dealing with his problems for the rest of the movie.

As luck would have it, there is a limo waiting right outside the subway station, and a woman in leather beckons Alex and Petey to get in. They waste no time accepting the offer. For those of you keeping track of the life lessons that are being taught to little Petey, so far we have:

This kid is going to have some problems.