Rhythm games are all but dead at this point. Good riddance, I say. I'm not interested in music acts being treated properly, their work integrated with gameplay in a way that makes a modicum of sense. I want to see artists getting shoehorned into video games for practically no reason at all. I want more games like these. 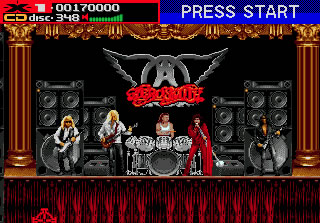 In 1994, Aerosmith changed video games forever. Or they appeared in a weird shooting gallery arcade game that was only remembered for its novelty. Either way, Aerosmith were certainly in Revolution X.

Players blasted their way through the agents of the New Order Nation, a militaristic group that had declared war on youth all around the world. Naturally, NON's first priority was to kidnap Aerosmith. You know, to strike a crippling blow against youth. After collecting enough Aerosmith wings and laserdisc power-ups to beat the game, players were treated to exactly the sort of concert you would expect from a video game starring Aerosmith in 1994. It was like Wayne's World through the eyes of Mortal Kombat, but nowhere near as cool as I just managed to make it sound.

The Call Of Duty games are absolute trash. You can point a gun at a man and shoot him, just like you did in the last five installments of the series, and everything surrounding that core action is terrible overblown nonsense. You're forced down hallways while a paper-thin plot attempts to move you forward. The writing is worse than a Michael Bay film, approached with the same depth and nuance that went into this post-credit sequence:

Yup. Drink that in. Watch it a second time if you want an expression of confused revulsion plastered on your face for the rest of your life. Avenged Sevenfold. That enthusiastic audience. Whether that sequence was an attempt to be badass or a play for laughs, the result is just gross and deeply wrong. I hate everyone involved. I hate myself for watching it. If you were smart enough to not watch the above video, my hatred for you is even stronger, fueled by jealousy.

I don't buy the idea of 50 Cent as an action hero. Sure, he's a muscular dude and he looks really cool when he scowls. Using the fact that he was shot as a badge of honor, though? If you pursue a field in which you face the risk of being shot at, actually getting hit by a bullet means that you are bad at whatever it is you're doing. If I got shot I would be embarrassed.

Still, 50 Cent got to be an action hero in video games. Blood On The Sand was a masterpiece in nonsense, a standard shooter stretched beyond belief to contain the ego of its star. The plot? 50 performed a concert in the middle east. In lieu of the money he was owed, he was given a crystal skull. Naturally, terrorists took the skull, leaving 50 (along with the G-Unit) to shoot a million dudes and helicopters to retrieve the tacky paperweight.

This was the ultimate vanity project. It was terrible. I love it and wish more musicians would be so unabashedly ridiculous. 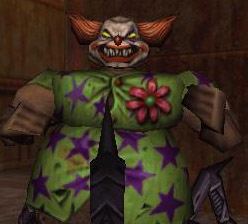 A name that just rolls right off the tongue, right? If you have any taste at all, the words "officially licensed KISS product" will sound every bit as unappealing as "Gene Simmons' opinions about anything at all". It gets worse, though. This is an officially licensed KISS product filtered through the creative lens of comic book artist Todd McFarlane at the height of his chains n' darkness period. If you're unfamiliar with McFarlane or KISS, this is as necessary as having Maroon 5 cover a Train song.

KISS: Psycho Circus: The Nightmare Child was a first person shooter that was both tacky and entirely too self-serious. It also happened to come along in 2000, just in time to ride the colored lighting bandwagon through the ground and into the substrata. Shooting mutant clowns in a boring neon green room then shooting mutant devils in a boring hot pink room really made a huge difference. This was an FPS filtered through a noxious stream of rainbow-colored KISS puke.

At least the Aerosmith concert at the end was badass.