The Super Bowl Halftime Show Has Not Gone Far Enough

It's one of the biggest music events of the year. It's clumsy, overbearing, shallow, nonsensical, nationalistic, and almost entirely devoid of live music being played or words being sung out loud. It's the Super Bowl halftime show, and it's our country's way of opening a hotel room door in The Shining.

This year's show will carry on the tradition. There will be big names, a lot of extras in bizarre costumes, and maybe even a precalculated controversial moment or two. It won't, however, reach peak stupidity and become so grotesque that it circles back to being amazing. Not unless the show follows my script. 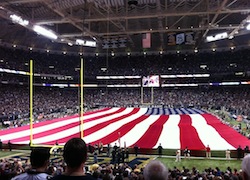 A high school band emerges, but not just any ordinary high school band. They are clad in red, white, and blue. Their instruments are forged from the smelted Liberty Bell. The band is huge. Not in numbers, but in stature. These kids are nearly thirty feet tall apiece. They come marching into the stadium, ducking to clear the locker room tunnels as they play that America theme song.

As they play, lights illuminate the dome's roof, which has been painted to become the biggest American flag anyone has ever seen. Then the dome retracts, revealing an even larger flag - nearly twenty miles across - in low orbit above the stadium.

A thousand jet fighters fly overhead. A column of M1 Abrams tanks burst through the stadium and punch their way back out in an explosion of debris. A nuclear missile is fired harmlessly straight into the air. As the crowd salutes to God and the tears rolling down their faces give way to blood, the song transitions to the most badass rendition of the Star Wars disco that has ever been played by a thirty foot tall high school band.

Before the band's last note trails off, a basic hip-hop beat begins to play. There is a large stage in the center of the field, a gigantic pair of curtains closed. As they slowly draw back, we see the 35 best hypemen of all time, all on the stage at the same time. There is no one else up there with them. No rappers, no DJs. Just all the hype you can imagine, getting the crowd hyped up beyond belief until all rational thought has been replaced by pure distilled hype. The audience surrenders to the siren song of "Yeah!", "C'mon!", "Unh!", and "Say what?"

Suddenly Taylor Swift arrives via a jetpack. She is dressed in an elaborate approximation of what a midwestern girl might look like in a Hollywood movie. Her face is locked in something like surprise, upraised eyebrows hovering above cold calculating eyes, mouth open as if in disbelief. "Wow," she says into the microphone mounted on her head, "I can't believe I'm here! And everyone's cheering! This is so shocking!" As ten thousand dancers dressed as pharaohs carry a concrete slab into position for her to land on, she sings about being treated badly by a manipulative boy. During her performance, she reaches into her pocket and texts a brutal breakup message to that kid from Hugo. 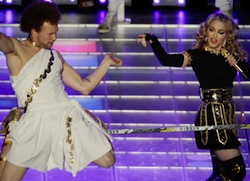 Then, the audience observes a moment of silence for all those who suffer concussions year after year in professional football, debilitating injuries that haunt players for the rest of their lives and often lead to suicide. Upon the end of the moment of silence, a humongous hologram shows two football helmets colliding and exploding. Olivia Newton John emerges from the virtual flaming carnage, launching into her hit song "Physical".

A solemn Chris Brown walks out. He states that the NFL is proud to announce that none of the John Madden video games have ever featured lethal violence. They support the NRA in its mission to end gun violence, and will do everything in their power to make sure that neither Doom nor Mortal Kombat are installed on any computer owned by the NFL. Chris Brown asks everyone to lower their heads and pray that some day all computers will be cleansed of violence so that we as a people can finally be free of it as well. When the audience looks up, they find that Chris Brown has been joined by a hologram of the Beatles. Each is wearing a t-shirt of a different sponsor, from Budweiser to Cialis to Ford and Papa John's. Together, they launch into a dubstep version of "Back In The U.S.S.R.", which has been changed to "Back In The U.S.A."

Upon the conclusion of the song, the stage empties and the announcer's voice booms. "Ladies and gentlemen, sir Jimmy Buffett!" The newly knighted musician strolls out as the crowd goes absolutely crazy. Jimmy locks his gaze upon the closest camera and does the unthinkable. He sticks his tongue out. What an impulsive act that no one saw coming, and which was certainly not rehearsed! People will be debating this moment for months! As Jimmy Buffet leaves, a sea of extras on the field turn on their light bulb fedoras to spell out "World peace!"