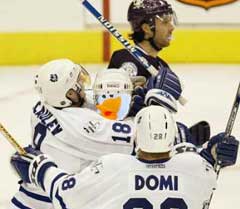 Duck discrimination is everywhere in this country. It was only recently that ducks were allowed to play in the National Hockey League. Here is Quacks Duckerson, leading scorer for the Kansas City Canucks.I have never seen the critically acclaimed but often unwatched series Arrested Development. The reason is because every time the show is mentioned anywhere on the Internet Arrested Development fanboys show up and start talking about how it’s the greatest show ever and that it’s going to get cancelled because the general public is too stupid to get the jokes and blah blah blah. They start telling you when it’s on and how great it is and I’m sick of it. You don’t even have to say the words “Arrested Development” in the same sentence. All you have to do is somehow get the words “development” and “arrested” on the same page somewhere and a fan of the show will show up without fail and berate anyone who does not watch it.

I was reading a thread on our very own Something Awful Forums about some random topic, probably Terry Schiavo the human carrot since everybody is talking about that stupid woman who literally vomited herself into a coma, and someone happened to mention Arrested Development. I think they were saying something like, “I don’t have much time because Arrested Development is coming on soon but blah blah blah.” The thread wasn’t even about television and it only took a couple more replies for someone to show up and start the “HOLY FUCKING SHIT ARRESTED DEVELOPMENT IS THE BEST SHOW EVER” nerd spiel. He posted this short essay on why the world is so unfair that excellent shows like Arrested Development are beaten into submission like a red-headed step child (or one of my children) and yet shows like American Idol prosper.

You know how when you say “Beatlejuice” three times Michael Keaton is supposed to show up? You only have to say “Arrested Development” once and someone will show up and suck your dick in the hopes that you watch this dumb show. Give me a fucking break. I’m sick of hearing about it and because everybody is praising the show so fervently I have decided to never ever watch it for as long as I live. I was mildly interested and was probably going to catch it eventually but because of all the Arrested Development lunacy you lost a potential fan. That’s it. You pushed too hard. You scared me away. And I’m sure you scared a ton of other people away as well. No show is so incredible that you have to buy a goddamn banner ad on a web site for it. Isn’t that the kind of thing the marketing department at Fox is supposed to do?

Ever since the story about duck gangbangs broke earlier this month there has been a lot of misunderstanding about why these gangbangs occur. Let me clear the air about this once and for all. Ducks have to reproduce like this or their species will die out. It’s because of duck season that ducks feel the need to rape their female companions ruthlessly in order to get them pregnant. As more and more ducks are killed for sport each year there will be more and more duck rapes. It’s all part of the circle of life. And besides, those bitches are asking for it, the way they wear their feathers like that.

This year, instead of asking the hunters to stop hunting ducks, which never works, I am going to take a different approach. I am going to warn the ducks about duck season directly and dispense helpful advice on how to come out of duck season alive. You regular Something Awful readers are more than welcome to read along but this advice is mostly for ducks okay. 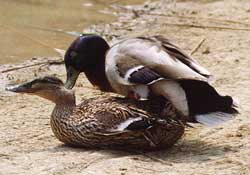 Hey! What did I tell you ducks?! No raping in the front yard!It’s that time of year again, duck season, the very mention of which sends shivers down every fowl’s spine. Every year duck season becomes more and more dangerous for drakes. Ever since the video game classic Duck Hunt, duck hunting has maintained it’s popularity among the ignorant and the easily amused and there are no signs of it stopping anytime soon.

I have put together a little guide of techniques you can use to defend yourself this duck season and if you follow my advice your chances of survival will be greatly increased! This is good news for all ducks and their families. I don’t want to see anymore ducks die so senselessly. Let’s get on with it.

Duck tip #1 - Invest in a Battle Mech: It is often believed that battle robot mechs are only for the wealthy. That may have been true a decade ago but these days a duck with good credit can get financed for any battle mech. The price of mechs has come substantially over the past few years. By investing in a custom made duck battle mech robot you’ll raise the odds of surviving duck season ten fold.

You don’t know how much your life will change for the better until you actually step into your first mech. I used to be a fat balding piece of shit who could not get laid to save my ass. Hookers turned me down for Christ’s sake. But the day I bought my custom fitted chrome battle mech with hippy seeking missiles I was doing some broad that night, and I didn’t even have to learn her first name! Trust me ducks, a mech will change your life, and possibly save it.

Duck tip #2 - Start Hunting Other Ducks: You know the old saying, “If you can’t beat them, join them.” If you are the kind of duck that has no loyalty to his kind, like a Caucasian person who dates outside of their race, just start hunting other ducks. Hell, don some hunting gear and fight the good fight alongside other duck hunters. The hunters will see that you are one of them and won’t shoot you.

But heed this warning, duck traitors. The hunters are just as unloyal as you are. Don’t be surprised if at the end of the season the hunters shoot you in the back and eat you alive!

Duck tip #3 - Incessantly proclaim that it is not duck season but instead rabbit season: Sometimes the best defense is a good offense. What you want to do is not simply accept that it’s duck season but try to create confusion by proclaiming it is instead rabbit season. The punishment for hunting ducks outside of duck season is steep and you’ll at least buy your feathered brethren some time to hide as the hunters try to verify what season it actually is.

If you do employ this technique you’ll have to watch out for the rabbits. They’ll start nonchalantly proclaiming that it is indeed duck season and that you are just blowing smoke. They have the upper hand and know your game. Don’t give up the argument though. Start becoming angry and scream that it is actually rabbit season. No matter what the rabbit says, don’t back down.

Unfortunately the rabbits have a dirty trick up their sleeves that an angry duck will almost always fall for. In the heat of the argument they will turn it around and say that it is indeed rabbit season. Most ducks get confused and say that’s duck season. When that happens the duck is often shot and killed while the rabbit returns to his den triumphantly. Don’t fall for this trick! Always stay cool and you’ll live to quack another day.

Duck tip #4 - Summon a Rabid Arrested Development Fan: If you are ever staring down the barrel of a shotgun and have nowhere to go, fear not my duck friends! Here is a technique to use as a last resort. All you have to do is scream, “ARRESTED DEVELOPMENT IS FOR FUCKING FAGGOTS.” Within seconds a fat greasy tub of lard with stains on his Linux shirt will show up and ask, “WHO SAID THAT?!?!” Just point to the hunter. The nerd will start telling the hunter how great Arrested Development is and that no one understands it and will rim his asshole if he promises to tune in whenever the hell it’s on, giving you ample time to run away to safety. Sure, the Arrested Development fan will most certainly be shot and killed but it’s a small price to pay. 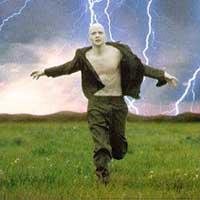 I didn’t really watch this movie recently.Duck tip #5 - Transfer the experiences of a dying duck to a hunter: I recently saw the movie Powder and one of my favorite scenes is the one where the albino freak guy puts his hands on the dying deer and the hunter and makes the hunter feel what it’s like to die in the woods alone like that. It was a powerful scene and made me cry like a little sissy bitch. Jeff Goldblum is also in that movie and I love his style of acting and how he pauses for a second between every other word. It’s so dramatic. He must have studied acting at Charles Grodin’s House of Acting and Waffles.

For those of you who don’t believe me I am here to say that this technique really works. I was at the video store the other day and there was this grizzled old man yelling at this poor employee because the movie he wanted to rent wasn’t in even though they told him it was when he called. He was yelling at her and asking for the manager and raising all kinds of hell. I stepped up to the counter and put my hands on the employee and the irate customer and transferred the emotions and feelings of the employee into the customer. The man fell to his knees and started shaking. After it was all over he apologized and left with his copy of Soul Plane.

I’m telling you ducks, just do this to every hunter ever and all hunting will cease within a year.

It’s time to take a stand and say NO to duck season. It’s a barbaric and painful “sport” that must be stopped. Ducks have given so much to society by contributing to our nation’s art scene, pumping money into the local economy, and keeping our lakes full of pristine bird shit. I plead with you, don’t kill these gentle animals.

And besides, it’s not duck season, it’s rabbit season.