I Am A Better Man Than You, Dean Kamen

A light bulb went off in my head, signaling to me it was time to become an inventor. Unlike other inventors, my light bulb has a scary moustache, an eye patch, and speaks only in Etruscan.The other day while fist fighting a washing machine to defend my honor, it occurred to me that I'm a virtual nobody in the inventor community. Normally I accept the fact that I'm a virtual nobody and just move on, but not this time. Something told me I was being cheated out of glory, and nobody cheats me out of glory! I was as enraged as a crate full of rare spiders. I found it especially irksome that my name is unknown when I'm crammed full of so many good ideas for sound inventions. Believe me, I'm a shining light bulb piñata, and inside my soft innards are the delicious treats of untapped and unwrapped invention, of revolutionary products, and the seeds of a better tomorrow. And unlike that rat bastard Dean Kamen, my ideas aren't for some queer scooter that that uses magical Smurf gyroscopes to prevent fat people from tipping over. I stab into the black heart of necessity, feast on its blood, and then clog the throbbing wound with invention. At least I wanted to, anyway. The big problem was figuring out how to give birth to the ideas gestating inside me. My initial plan of action was both painful and disturbing, as it involved me building a Lego birth canal for my groundbreaking ideas. This idea was quickly dismissed when I realized I wouldn't have enough of those long, narrow blocks.

Thankfully my inventing impasse was overcome today when I had myself one of those newfangled epiphanies all the kids are having. First, I realized that because I was a piñata of ideas I would need only to subject myself to the blunt physical trauma of being severely beaten by small children at birthday parties to cause these golden inventions to cascade out of me. Then, when I realized I live in mortal fear of physical pain, I discovered a method whereby forcing my hand down my throat, I could induce vomiting. I could puke ideas up, freeing them from my stomach lining and introducing them to a bold new world. With all that said, I now eagerly await my "World's Awesomest Inventor" medal or trophy. To show my dedication to my new craft I spent the better half of the day vomiting, and so now I'm ready to file papers with the patient office and blast the fucking socks off their hands and the snot out of their ears. Take a look at my inventions and experience a state of "WOW" that won't wash off no matter how hard you try:

The Buffet Desk 2000
It's my humble opinion that buffet table technology is the absolute apex of human accomplishment. And while it represents the ultimate in dining, it doesn't represent the ultimate in convenience and accessibility. When you're trapped in the office pinioned behind a merciless desk enslaver, how exactly do you experience the rich tapestry of food opportunities a buffet table has to offer? Sure you could leave the office, but is your boss going to approve? Not likely! But now, thanks to me, the buffet table comes to you! By combining the eloquence and luxury of an all-you-can-eat buffet style restaurant with the productivity and efficiency of your standard office desk, the buffet table transmogrifies the work environment. Now the diligent worker is surrounded by not just a food packed buffet table, but also a spacious desk! Enjoy all the food you want while never taking a lunch break! Sneeze bar sold separately.

Portable Sausage Maker
For too long people have been denied the ability to make sausage anytime they want, wherever they want. With my new Portable Sausage Maker, people will finally be granted total freedom to make sausages when and where they want with impunity. Whether at the office, in the car, on a train, a plane, with friends or alone, you can pump out delicious sausages. No one has the right to deny you sausage when you need it most, not practicality, not sound judgment, not God, and not even the government. Great for nature excursions, long trips, or simply at home in bed. Take it from me, I'm not Hitler!

The Shirt Belt
If your pants happen to be too big, you can just put on a belt and they'll magically bond with your waist. But what happens when your shirt is too big? Are you just going to let it sag like some uncivilized barbarian? Not on my watch, you scandalous Hun! The shirt belt allows you to fasten your shirt around you like a glove, or pair of pants, securing it firmly and preventing it from hanging loose around your person. Now you can roam freely in even the most epic of shirt sizes and fear not the scrutinizing looks of others, who would dare to judge you as though they were gods or robots of judiciary programming.

Treadlight Ghost Shoes
These shoes will haunt the soles of your feet with the souls of the dead! You've experienced all that normal shoes have to offer; now it's time to open up to a new spiritual world of possibility. Ghosts can move through walls, float, and cause your TV to change channels randomly. Now all that power is harnessed into comfortable, easy fit shoes that never wear out as long as people keep dying. Don't worry about outgrowing these shoes either, because Ghost Shoes expand as needed by consuming the precious life energies of you and your loved ones. You also won't need socks anymore, for your feet will be protected in a rich coating of ectoplasm. Ghost Shoes will last as long as you do, but don't ever think of taking them off! Warning! Ghost Shoes will not work inside a church or any place sacred. 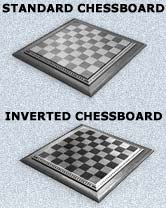 Here we see a comparison between what Will Smith would call "Old and Busted" and "New Hotness." New Hotness always wins.

The Amazing Inverted Checkerboard
Chess is a timeless game adored by people all over the world, but unfortunately the game is RACIST. Also, if you're dyslexic or left handed, it's impossible to play. Because of this, I have invented a new chessboard that has black squares where the white squares normally are, and white squares where the black squares normally are. This not only removes the racism from the game, but also allows dyslexic and left handed people to play as well. After all these centuries, isn't it time we finally tear down the walls and let everyone through? I think so, and I'm definitely not Joseph Stalin.

Incredible Hover Hat
I strongly believe that levitation-based headwear will be the next big thing. What good is a hat that rests lifelessly on your head when you could have a hat that floats three feet above your head? Sure it sounds crazy, but so did entrusting two bad dudes to save the president from ninjas, and we still did that. And really, if that crown of thorns Jesus had to wear floated above his head instead of digging into his head, wouldn't he have been a lot happier? By purchasing hover hats, you honor Jesus and make him happy!

Supreme Comfort Cottage Cheese Underwear
Like most people, I find underwear to be restrictive, not to mention cold and impersonal. That's why I've invented the ultimate comfort system. Cottage Cheese Underwear wraps the wearer snugly and deliciously inside an insolated bladder filled with cool and soft cottage cheese. Honestly, is there anything more soothing than walking around while half your body is bathed in cottage cheese? I think not, and I think not very rarely. An alternate model will allow you to use cream corn or coleslaw in place of cottage cheese. Slip into a pair of these homely cheese britches, and see how light and cool you feel. You'll be sloshing around in a pant load of heaven.

I realize pretty much all of these "inventions" are just practical adaptations of things already on the market, but inventing isn't easy. Inventing is especially hard when you have to throw up so much. Once I figure out a better way of extracting revolutionary invention ideas from my bowels, I'll transform the world like some kind of crazy fascist. That probably won't happen for a while, since I have to go see the doctors about this damn eating disorder I accidentally invented.

The ARC mp3 page has been updated with a whole bunch of songs. In case you haven't been exposed to ARC, it's the music project that Rich "Lowtax" Kyanka does in the nineteen seconds of his spare time. There are now over 30 mp3 tracks just waiting for you to download and then remark, "what a bunch of crappy electronic music!" So head on over and get some free so-called "music"!