I have this weird feeling that I have seen this place before... oh wait! They're fucking everywhere.

Everyone has to live in an apartment at some point in their lives. By this, I mean that not only is it very likely that you will live in one but also that it's a necessary and rewarding experience. It's almost a given that people have to make some sort of transition between living in a pit brimming with squalor and filth (college) and living in a crappy, tiny house that's falling apart and that has only one working sink but it's THEIRS (after they pay the bank off for the next 15 years), goddammit. It would only make sense that these places of growth and change are the rows upon rows of poorly-built apartments lining the SUV-laden streets of America's suburbs, each one more shoddily and cheaply constructed than the next. Their paper-thin walls are shining beacons of hope to the up-and-coming cubicle worker and the awe of seeing these apartments standing tall and completely identical against the sky, blocking out all five of the nearby Starbuck's coffee joints, can cause even the most smelly of antiestablishment hippies to shed their patch-pants and place at least four large USA decals on their rusted-out Volkswagen Rabbits.

There are apartments and there are apartments. Living in one of these new, cookie-cutter, labyrinthine monoliths is truly a circus of wonder and delight. This is especially true if you interpret my use of "wonder and delight" to mean that living here is the worst kind of horror I could possibly imagine. Not only are these places pits of despair and sorrow but they are also filled to the brim with annoying neighbors and inconvenient flaws as a result of their cheap construction. The people who put these monstrosities up are making a shitload, however, so it makes me feel better that my misery is helping to keep some balding fat man in brie and bacon. These places are going to fall down when a strong wind comes along in five years or so, but in the mean time people are packed in like sardines and pay up the asshole to live in a cardboard mess.

This place is a crazy patchwork quilt of annoying people. I am sure that we fit nicely into that category what with our late-night watching of bad movies on the Lifetime network and giggling loudly at them like mad harpies, but the people living around us are worse. Our immediate next door neighbors are: 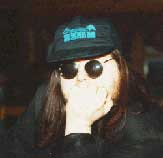 Stoners / Heating Van Guy: There is pot smoke coming out of their apartment at all hours of the day. Never mind smoking weed every day, these people smoke it all day long every day. They smoke it in their sleep and in the shower, if they take showers. They are going above and beyond the call of duty and smoking it not only at 4:20 but also at 3:20, at 2:20, etc. It's a pot paradise over there, and they can be heard at all times laughing moronically in their hoarse stoner voices at whatever it is that they watch on TV. The TV itself is always extremely loud and they must keep it right next to their door because you can hear everything that's on while standing in the hallway.

The weed isn't the worst part here, however. Weed is ok compared to this. The worst part has to do with the fact that the apartment complex itself built very few parking spaces and the ones that they did build are all rentable spots that they can tow you for parking in even if you live in the nearby buildings. They charge outrageous fees to rent one dumb parking space, but that's how they get you! There are about two spots without numbers on them that we are allowed to park in. Anyway, one of the stoners occasionally brings his weed with him to a job in which he drives an enormous van with the words, "C & C Heating: It's hard to stop a Trane!" on the side. It's enormous, and there are always pipes hanging off of it every which way. He parks this thing like a fool every single fucking day, and due to the shortage of parking spots it becomes very, very frustrating to see that goddamn van parked across the only two non-rented parking spots in the place. This becomes especially annoying when we have just come from the grocery store and we have a trunkful of TV dinners and Pepsi One to cart up the three long flights of stairs to the apartment itself. Someday we will blow that goddamn van sky high and hopefully those stoner morons are in there when we do. Then we'll put the pieces of the blown-up van back together and blow it up again.

PS. If you are reading this, heating van stoner, we found a set of keys marked "Buckwheat's Van" the other day. We assume that these are the keys to none other than your bigass goddamn heating van. Don't expect to get them back but do expect that you will come home from your dumb job installing furnaces to find your van gone. WHO KNOWS WHERE WE PUT IT? AHAHAHAHAHAHAHAHA AHAHAHA HAHAHA Ha ha... Heh. Hello?

Weirdo Garbage People / Animal Torturers: The people on the other side of us are even more horrible but they are horrible in frightening ways. The stoners are just dumb, but these folks have some bigger problems, it would seem. One of these issues has to do with garbage. We are only allowed to put garbage outside on Monday, Wednesday, and Friday between the hours of six and nine AM. I guess the apartment people don't want this place to look like a dump or whatever. If anyone puts their garbage out at any other time, the apartment people, specifically one ornery black man (known from here on out as the Trash Negro) will LOOK THROUGH THEIR GARBAGE until they find something with a name on it. The Trash Negro will then knock on the person's door with the garbage, hand it back to them, and yell at them for at least five minutes about how they are violating their leases by putting garbage outside at any other times. He is a force to be reckoned with and king of the dumpster, so the people live in fear and obey.

In any case, the people next door have a problem with the trash laws. They don't take their trash outside at the wrong times because they know that it would incur the wrath of a very upset Trash Negro, so they do what they think must be the next best thing, which is put the trash in the hallway outside of their apartment. The problem with this is that the hallways are very narrow and also that they wait for weeks to get rid of their garbage. Not only do they have a shitload of it but it smells terrible. Every decaying food item in the world must be in those bags. Soon the hallways is filled with the pungent stench of refuse, and soon after that the smell creeps into our own apartment through the door. Eventually, our entire place smells like a sewage treatment plant in summer thanks to the noble and selfless efforts of the crazy garbage people next door. 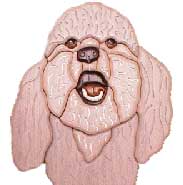 The other problem that these people have is that they lock their poor dog on the porch all day long. "The porch" as it is called isn't really so much a porch as it is a narrow concrete slab that sticks out of the back of the apartment building. They leave for work at an early hour (something like 6 AM), and then the barking begins. That damn dog yelps and howls and barks nonstop for the entire fucking day. When we leaned over the porch railing to try and see what the deal with the dog was, we saw that the garbage weirdos had put chicken wire all around the porch so the dog was in a sort of cage. It was one of those little white dogs that are made to be stepped on, but still, it was obviously very unhappy. We called the apartment people to complain, but the barking continued for days and we couldn't sleep. What the hell is wrong with people? What the hell is wrong with THESE people? Nothing that a little painful death couldn't fix.

I suppose it could be worse. Our neighbors could be knife-wielding pedophile furries who like anime and attend Renaissance fairs in costume. Or they could be libertarians. As it is, there are other mysteries about our apartment life that have yet to be explained, such as the loud hammering that takes place in the apartment below us at 4 AM every goddamn morning without fail or the thumpin' booty bass that never stops. There's also the mystery apartment across the hall containing what is most likely a room full of government wire-tapping equipment. Those guys should really pick up the six phonebooks and two Chinese food place flyers lying outside of their door.

Living in an apartment is frustrating but it is a learning experience. I have overheard many an exciting domestic dispute through the rice paper walls here and I am buying a new pair of binoculars so that I can watch in greater detail the mating rituals of the two iguanas that the people across the way keep in the window. Other than that, it would really be ideal to find a crappy shed to live in so that I can count myself among the many who have survived apartment hell, but I suppose that I'm in no hurry. Sure the shower is falling apart and there are carpet tacks that poke into your feet under the carpet, but it's building character one piece of plywood at a time and $1200 per month. All that I need now is one of those way rad SUV's.