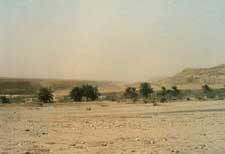 Day 1: It's winter in New England. Well, it's winter all over the place, but here it actually means something. Specifically, it means that it's snowing. Again. Yes, as we speak, millions upon millions of tiny white flakes of cloud-dandruff are descending upon our fair streets. According to the weather reports, my entire town will be covered in the stuff by the first light of dawn. I won't know about it until I get up around noon, but I assume it will be there at dawn, anyway. I have a feeling that those of you who live in warmer climates, such as Anywhere, don't quite grasp just how serious this situation is. For instance, I know for a fact that we have a decent celebrity readership out in L.A., although they disguise their names when they email me ("Nick Jackolson" and "Gel Mibson," I'm looking in your direction), and those guys probably haven't seen a real snowfall in years. They don't understand the problem that a snowfall of this magnitude causes. They think that snow falls and everyone in the vicinity drops what they're doing, rushes outside, and engages in playful snowball fights and the building of magical snowmen that come to life and teach children the true meaning of winter. Let me tell you something about snowball fights. The only thing that ever happens is chunks of freezing cold slush smacks into your face at seventy miles an hours, then drips down your collar and melts because of your body heat. The frigid water soaks your innermost layer of clothing, which is practically a guarantee of hypothermia. As for snowmen, anyone who's seen "Jack Frost 2" can tell you that snowmen are not to be trusted, and certainly not with our children. But I'm getting ahead of myself. You see, people who live in warm places, not all snow can even be used for snowballs and snowmen. There are hundreds upon thousands of different types of snow, all of them with their own particular traits that will make you wish you were born Hawaiian. The snow we've been getting is wet and heavy, so it is incredibly difficult to shovel, and yet it somehow lacks any sort of cohesion, so the minute you do get a shovelful, it all falls off. I'm visiting my parents, and in the time that I've been home we've already had two major snowstorms. Snow like this knocks out power lines, it traps people in their houses with their own families, it closes schools and releases droves of snot-nosed brats upon an unsuspecting population, and it must be stopped.

Unfortunately, putting an end to snow is a more difficult task than it sounds. I got in contact with a representative from State Og, but they said that "snow encourages holiday shopping, which we need to bolster the economy until we perfect our mind-control ray," so they wouldn't let me use their weather machine. Josh says he's working on a weather machine, too, but he refuses to show anyone the design specs in any format other than an incredibly annoying flashing GIF, so that's out. Global warming is definitely a step in the right direction, but it's taking too damn long. At this rate, we here in snow country will have to shovel our driveways countless more times before the penguins even start to die off. My brother just came home from work early and said that the streets are getting bad already. For those of you who haven't driven in snow before, it's an adventure. As soon as the streets become a little slick, every time you come to a stop sign or red light you have to take a guess at whether or not the car is actually going to stop moving. Anti-lock brakes are basically useless on anti-stop streets. The way it's coming down now, it looks like the snow is inevitable. It's too late to stop this one. All that we can do now is try to contain the damage.

I recommended that we coat the driveway in gasoline, light it, and just let it burn all night. We could even roast chestnuts over it. That way, we wouldn't have to shovel in the morning. My father decided against it, saying that the fire would undoubtedly spread to the lawn, the house, and the dog. I tried to convince him that we could control the blaze by lining the driveway with oily rags, but for some unknown reason, he still didn't think it was a good idea. At the very least, I thought we should set the cars on fire so we don't have to scrape them off tomorrow. There's nothing worse than standing outside in the freezing cold, chiseling off the stubborn sheet of ice that seems determined to prevent you from opening the car door, just so you can turn the car on to warm it up while you scrape away the ice on the windshield, windows, and mirrors. Again, my father didn't follow my reasoning. He just muttered something about "stupid kids" and "disowning," but I didn't catch all of it. 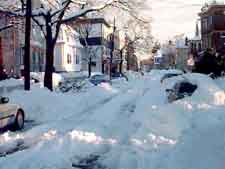 Day 2: My father woke me up at the stroke of noon, just as I had predicted. I staggered out of bed a few minutes later and took a look out the window. White. Everywhere, everything was white. It was like Christmas with Ross Perot. We got hit with a solid foot of airborne nose candy. The power wasn't out, at least on my street, but with that much sky sugar sitting on the lines, it wouldn't take much to bring down some wires. As I gazed out across the pure white street in my usual noon to three stupor, I noticed a sight that was unfamiliar to me. A town sanitation department truck was parked at the end of my driveway and a sanitation guy was giving skis to my mother. I couldn't think of any reason why my mother would be getting out of a sanitation truck. Sure, I'd seen her getting out of the mailman's truck plenty of times - almost every day for a year until my father killed the mailman for some reason - but never a sanitation truck. As soon as she got inside, I found out what had happened. She was cross-country skiing up the street with the dog trotting alongside her, like you do, when suddenly she tripped and banged her tooth against one of her ski poles. The pole, being made of metal, didn't offer much in the way of cushioning. Her lip was split open and bleeding profusely, which is not the way you want to see your mother when you've just woken up. My father brought her an ice pack to keep the swelling down, but there was still one question left unanswered? Where was the dog? My dog, Nikki, apparently refused to get into the sanitation truck, which meant she was still somewhere out on the street. My day had hardly begun, and already my mother was in need of immediate medical attention and my dog was missing. You see? Snow tries to break up families. 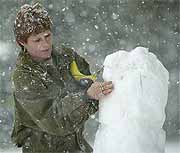 This can only end in tears... tears of evil!

My brother and I, neither of whom were exactly dressed for cold weather or being seen in public, set out to look for our beloved pooch, and by "set out to look" I mean, "stood at the edge of the garage and shouted." Despite our desperate cries, such as "Nikki," "Nikki, come," and "Nikki, dammit, come already," she failed to appear. We rushed back inside and threw jackets over our bathrobes with the intention of going to search for her, but as soon as we got back outside, she came bounding down the street, being pursued by another dog. We were a family again, but it was short-lived. The moment we got the dog back inside, my father rushed my mother to the hospital. Three hospitals later, she got the stitches on her lip that she needed and plastic surgery is in the works to repair her teeth.

Harried by what was already becoming a long and difficult day, I returned to the window. While my brain churned with thoughts of my mother's well-being and brain juice, I watched my neighbor across the street shoveling his driveway. He's an older man, and in the past my family has pitched in to help him clear out his driveway. I considered going to help him, but I was too frazzled by the day's events, and besides, he was only clearing out a path for one car to get to the street, and it looked like he had the situation under control. I continued to watch as he somehow managed to push all of the snow in his driveway into one huge bank at the bottom. Next he piled half of that bank onto the other half, making one huge snow bank. Then he got in his car and promptly proceeded to drive it diagonally directly into it. I laughed at this, because frankly it was funny as hell. The day was young, but so far I had managed to stay dry. Now all that I had to worry about was losing pow

Git the Shotgun Ma, the Germans is Comin'!

Hey folks, Taylor "Psychosis" Bell here. It's Sunday, and that means I've got another review of a festering pile of shit that has cleverly disguised itself as a game. I wanted to give this day a cool name like "Psychosis Psunday", but Lowtax said it was a bad idea. He also called me a fag. Anyway, this week's game is World War 2: Normandy, a horrifying look at what Medal of Honor: Allied Assault would have been if it had been coded by a group of angry ex-RAF pilots who wanted to make the Germans look really stupid by giving them worse AI than the goombas in Super Mario Brothers. 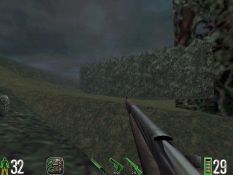 My suspicions about the game’s quality deepened when I saw the notice on the title screen that World War 2 Normandy used the Lithtech engine. They only deepened further after I fought my way through the horribly broken menu system and saw my mission assignment, which was to parachute by myself into the middle of a hedge maze and shoot a bunch of German people in the face, an activity that most people would frown upon nowadays. I guess our standards of decency just weren’t as high back then. The mission briefing is followed by a white-knuckled, high-suspense cutscene that consists mostly of a still model of your guy slowly falling with a parachute on while planes fly all around him and tracers whizz by at speeds that occasionally exceed 5 miles per hour. The entire cutscene fades to black before you land (probably because showing the landing might require them to animate the model in some way) and then you are thrust into the wild and wacky world of Normandy.

Sound exciting? You bet your stapler-resembling gun it does! Check out the review of this wholesome, patriotic, all-American game or you're on the side of the terrorists.