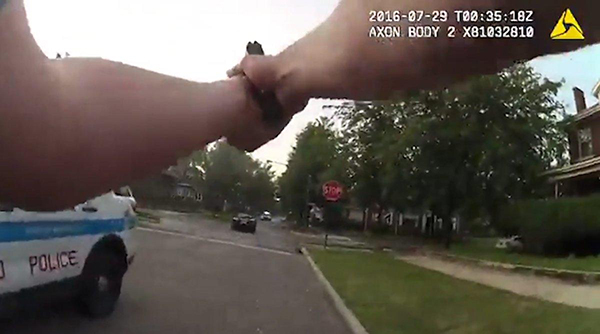 In an interview with The Wall Street Journal, all of America said that they were "kinda over" seeing so many unarmed blacks getting gunned down by white cops on TV.

"Yeah, yeah, we get it. Institutional racism. What else is on?" said America, as it reached for a bowl filled with every kind of snack imaginable. "I mean, it's a tragedy, but after the tenth time it happens...it's a boring tragedy."

America added: "Is Homeland back yet?"

America, which scratched itself multiple times during this interview, offered several ways the media could "spice up" the tired old cliche of a person of color being deprived of their life for no reason.

"They've gotta up the ante," said America, to itself, while scrolling through Facebook on one big iPhone. "Maybe a very old black man could get gunned down by cops? Or a black kid? No, wait, we saw that one already...ooh, the Olympics are on!"

America then briefly fell asleep, only to wake up screaming the phrase, "mashed potatoes."

Henry Louis Gates, Harvard professor and expert on race relations, acknowledge that blacks had "a better job to do" of spicing up their storyline for the white community.

"You can't blame them for tuning out if we just keep playing the hits," said Gates, his eyes darting around looking for cops as entered his Cambridge apartment. "Here's hoping the next black to be killed by terrified white bullies is someone whites can relate to, like the milquetoast Canadian rapper Drake, or the lovely and talented Rashida Jones."

"If only Pharrell Williams could get shot in the back by police," sadly intoned Gates, "we might be able to get something going."

Newt Gingrich, who we interviewed because we knew he'd say something crazy, blamed waning white attentions spans on a variety of things, including "Bachelor In Paradise," "Overwatch," and, "the fact that menacing black teens keep jumping out in front of cops bullets."

We knew we could count on him.

When asked just how many videos of unarmed black men getting killed it would take for our nation to do something, America grabbed a giant remote control, and tried to change this interview to another channel.