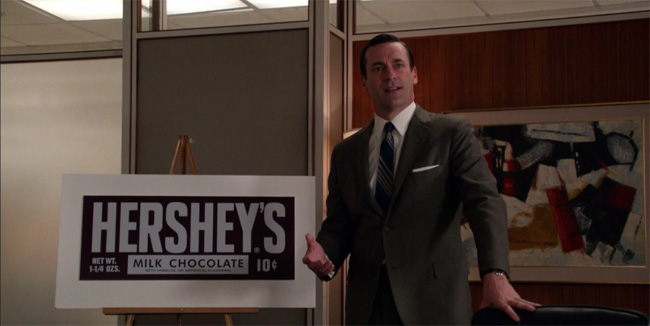 The men all chuckle as they take their seats around the table.

VIBERZI CMO: So have you found a way to work in one of those 3D animations where liquid coats the inside of a bowel?

VIBERZI EXEC: Pepto Bismol thinks they've got a lock on those, but Imodium has one that is dynamite.

VIBERZI CMO: It pays the bills.

DON: Diarrhea, gentlemen, is a rear-end riot of the bad stuff. It's not fun, it's not sexy. It means ruined pajamas and squatting over a gas station toilet trying to think about football plays while your scalding dookie knot blasts gravy. But what if diarrhea could be sexy?

DON: Women don't want a cure for diarrhea, they want a cure for what ruins their allure. Diarrhea blasts out of our second sexiest part - the human butt - and it's hard to be more sensual than a cascade of caramel-colored liquid. The velvety smooth chocolate waterfall is the number one shot of a Hershey's commercial, but when it comes to number two you want to forget about the chocolate byproduct. So how do we get to sexy?

Don reveals the card depicting a voluptuous woman in a bodysuit.

Gasps of surprise and murmurs of approval can be heard throughout the room.

VIBERZI CMO: I wouldn't kick her out of bed.

DON: Or your toilet. That's the point. Women want to be sexy more than anything, so if you want to talk to women about diarrhea, you have to speak their language. You have to say, "We get it, you can't get that hunky husband with the good job when you're stinking out every john from that diner to the complicated underwear department of Menken's." Women need a friend, and this sexy friend is fun, she's a bowel that just needs a little Viberzi to be sexy again. 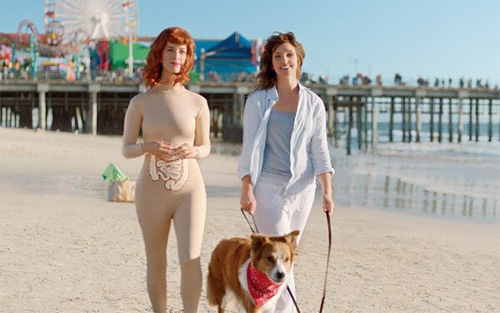 VIBERZI CMO: You can't see it right now, but my dinger is hard as a diamond drill.

DON: We'll get a curvy woman, a body suit with a bowel on it, a really bad red wig, and then we'll have Irritabelle following pretty ladies around everywhere. These sexy moms can't get away from their butt issues, but just pop a little Viberzi in there and the rancid potty-wrecker is all smiles and sweetness. Then they'll be doing all the things they can't imagine doing with their doody dilemma; biking, wake boarding, wearing white dresses, eating at a buffet; you name it. 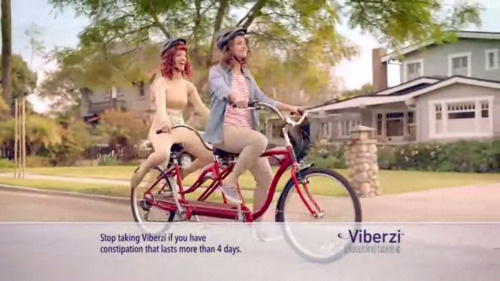 VIBERZI CMO: Could we get a wet t-shirt contest in there? You'd think with all the water hoses it wouldn't be a big deal, but diarrhea just spoils those things. All up the back of the shirt and it's under the fabric so it doesn't wash out. People notice.

DON: Maybe save that for an after 10 PM cut of the commercial.

VIBERZI EXEC: How about a seesaw?

VIBERZI EXEC: I'd like to have the diarrhea lady on a seesaw.

CUT TO Don drinking in his office and staring out a window.