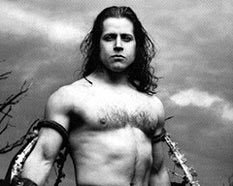 A hero and scholar.Since I have been writing this periodic series of articles on great heroes throughout American history I have covered everyone from George Washington to George Patton, but until now none of them have even been alive in the past fifty years. Today I would like to reintroduce you all to one of the greatest Americans this country has ever seen, a man by the name of Glenn Danzig. You probably know Danzig best from his first and only term as president of the United States from 1988 to 1992. During these years Danzig hastened the collapse of the Soviet empire, saw the fall of the Berlin wall, and lead our troops to victory over the much vaunted military of Saddam Hussein. Danzig never sought reelection, and for many this beloved and proud American disappeared from the public eye. Danzig has always been a great human being, whether as the leader of the free world or as a simple citizen, but he is also a complex and sometimes troubled man.

With this installment of the American Legends series I would like to introduce you all to the real, the incomparable, Glenn Danzig. 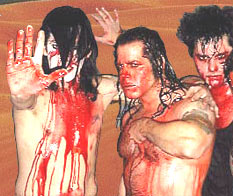 Danzig and "His Boogie Lights" tour the holyland.Glenn Danzig was born in Portland, Minnesota in 1955 to an itinerate sharecropper named Malcolm Danzig. The identity of Glenn's mother remains a mystery. Some suspect that she was a Portland area prostitute named Fat Betty, others believe her to have been a jackal, a few who are especially crazy think that she might have actually been a mountain from which Malcolm Danzig carved a son and gave him life with Kabalistic magic. Whoever Glenn Danzig's mother actually was she passed along to him incredible physical strength coupled with a quiet gentleness that completely contrasted the lazy screeching of his father. Malcolm Danzig worked his son ceaselessly while he himself spent almost all of his hours sleeping. Malcom was legendary in Portland for sleeping an entire week and only waking up to drink water so that he didn't die from dehydration. Glenn was the exact opposite of his father, tilling the soil and constantly working to nurture a variety of crops.

Glenn slept very little, and educated himself by reading books ranging from The Bible's New Testament to the Bible's Old Testament. Danzig had a great appreciation for the gospels and would often impress townsfolk as young boy by quoting long passages of scripture. Danzig experienced a crisis of faith at the tender age of ten years old when his father was violently killed in a bucket accident at the haberdashery. Danzig spent many months mourning and questioning how a supposedly just Christian god could end his father's life so suddenly and brutally. Eventually Danzig experienced an epiphany and at the age of thirteen he entered seminary school to become a catholic priest. Glenn Danzig was on the cusp of ordination in 1973 when he left the seminary suddenly to form Christian disco band "His Boogie Lights". Glenn believed that the best way to reach out to the youth in America with the healing message of Jesus Christ was through the trappings of disco music. With songs like "Holy Inferno" and "He's on the Dance Floor" Danzig and His Boogie Lights paved a path of righteousness through the seedy underbelly of American pop-culture.

Danzig wasn't just devoted to his music, he was something of a renaissance man, branching out into pottery, sand painting, and particularly assemblage art. Danzig loved to walk through an autumn forest picking up leaves, twigs, and the husks of cicadas and then hot glue them all to a sheet of rusted metal he found on the banks of a river. Danzig referred to his art as "his quiet worship of the Lord" and would often spend hours locked in his humble studio with a hot glue gun and a dead rabbit. While attending a symposium on Christian ethics in business, Glenn met Luella Pierce, an attractive and devout woman who he quickly developed a friendship and budding romance. In 1978, two days before their wedding, Luella was raped and murdered by a crack addict while walking home from church. Danzig began another sorrowful crisis of faith, one that would change the face of the American political landscape. 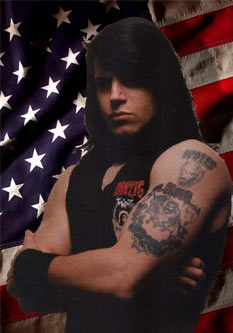 If you wanna find hell with him, he can show you what it's like.Danzig resolved his crisis of faith in the spring of 1979. He realized that his music career and art could never affect the kind of change he desired in the world around him. He toned down his religious rhetoric, moved to California, and ran for a position as a state representative. His popularity as a musician got him the nomination of the Republican ticket and he handily won the election. Danzig had made the shift from man of the cloth, to musician, and finally to career politician. He spoke passionately about the need to respect the freedoms of men, to protect the children from the dangers of offensive television like "Rowan and Martin's Laugh In", and the importance of the family unit. A lot of Democrats joked about Danzig's career as a disco superstar, but no one was laughing at the jokes when he became Governor of California in 1982.

The self styled "prince of patriotism", Danzig loved to mingle with his constituency. He wore a red, white, and blue striped suit and would frequently attend parish picnics and other public events just to let the public know that he cared. When Ronald Reagan completed his second term as president of the United States, Danzig decided to make a run for the highest office in the land. He bid his beloved Californians adieu and set off across America on a whistle stop tour of every major city and many smaller towns. Despite the fact that Reagan's vice president George Bush was favored for the Republican nomination Danzig continued on without severing his party ties. When Bush won the Republican nomination Danzig was undeterred. He declared himself an independent and stated his intentions to run against both Bush, who he implied was a closet homosexual, and Dukakis, who he insisted was Jewish and thereby "responsible for the death of our savior, Jesus Christ."

Danzig trailed behind the other two candidates and received repeated death threats from anonymous conservatives who felt he threatened to steal votes from Bush and give the election to Dukakis. Despite this Danzig persevered. On the night of the first of two presidential debates a man approached Glenn in the green room and stabbed him repeatedly with a pen knife. Security quickly arrested the man but Danzig was badly injured. With only minutes to spare before the start of the debate and bleeding grievously, Danzig refused to go to a hospital, only allowing the EMTs on the scene to bandage him beneath his suit. He staggered onto the stage, pale and sweating, and proceeding to, as one senator put it, "debate the holy fuck" out of his two opponents. When the light above the camera went out signaling the end of the debate telecast Danzig collapsed to the floor and was rushed to the hospital. When word spread of his heroic performance Danzig's polling numbers soared. He advanced ahead of his two opponents and a further impressive debate performance ensured that he would be the next president of the United States. With over 70% of the popular vote, Danzig was moving into the White House.

Campaigning makes him come alive!Danzig's term as president was filled with accomplishment and important events. The Berlin Wall fell and the Soviet Union collapsed under its own weight, and Danzig moved quickly to "bring the love of Christ to the godless communists". He sent huge aid packages to former Soviet states that were struggling to establish democratic governments on the condition that their populations had to convert to Christianity. When Iraqi dictator Saddam Hussein invaded Kuwait, Glenn Danzig swore to protect the people of that mid-eastern nation and personally traveled to the battlefield to lead his troops. Danzig was a firm believer that he should not ask anything of a man that he would not ask of himself. He dug up minefields with Army engineers, drove a tank through the streets of Kuwait City, and battled oilfield fires with cleanup crews.

Danzig did not rule without a certain degree of controversy. He was known for making obscure comments and bizarre references to apocryphal Biblical texts that often confused or outraged Americans. One comment he made following race riots in Los Angeles, that it was going to be a "dirty black summer", sent ripples of anger throughout the African American communities. Violence spread and thousands of picketers showed up outside the White House to protest what they believed was a racist president. Similar comments, all of which Danzig attributed not to racism or insensitivity, but to his intimate knowledge of Biblical verse, caused rifts to open between Danzig and the American people. By 1992 Danzig himself realized that he might not be fit to serve as president of the United States. In a televised address he stated that he would not be seeking reelection and commented that "America is not ready for the will of Jesus Christ". Shortly after leaving office Danzig made references to a coming apocalypse, and then disappeared quietly and completely from even the watchful eye of his Secret Service protectors. 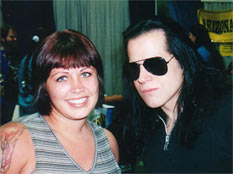 Danzig with one of his students.The Disappearance of the Prince of Patriotism

To most people in America Glenn Danzig is nothing more than a minor footnote in our great nation's history. He was a president who was ambitious and righteous, but had a tendency to overstep his bounds and put his foot in his mouth. Contrary to what many believe Glenn Danzig has not died or given up on his dreams of a Christian America. He continues to believe that the apocalypse is coming and has devoted himself to a children's ministry in Arizona where he preaches to young kids about the salvation the lord has to offer. Always a man of many talents, Danzig also writes, directs, and performs in a children's Christian puppet theater called the "Danzig Schoolhouse Gang", performances of which are taped and televised on regional Christian broadcast outlets. Danzig also has founded a school of faith-based self defense called "The Glenn Danzig Armor of God Institute". There Danzig teaches people how prayer can protect them from diseases, war, poverty, and even an armed attacker.

Let me be the first to assure you, that you have not heard the last from Glenn Danzig.

I Don't Want A Title for This

Hello, hello, and hello again! It's your pal Livestock here, bringing you the word direct from the mean streets of the World Wide Web. The new Photoshop Phriday is up! This marks our 8th Variety Pack, and it comes with two flavors of comedy. The first involves America's vice president, the undead Dick Chaney. If that name doesn't scream comedy, then you need to turn your hearing aid up, Bea Arthur. The second revolves around removing the bullshit from marketing. Strangely, when you remove all bullshit from marketing, you are left with nothing but pictures of Forrest Tucker in a variety of provocative poses. At least that's what I thought at first, but then I realized I was heavily medicated and not even looking at my computer monitor. Here is a preview straight from the no bullshit marketing section: Be a sport and help us out by reading Photoshop Phriday. The entire feature is actually encapsulated in this magical bit of underlined text, which you can digest by clicking on it.