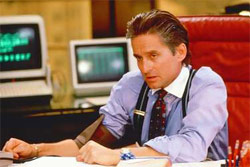 He manages a HedgeFUN! I spent all week coming up with that one.I love money. Wall Street: shit yes. Greed isn't good, it's great. I love fictional products I don't understand being sold to me by coked out frat boys who don't understand them. I like buying in and rolling the dice. I like paying 600 grand for a two bedroom in Calabasas. I offset my low flow toilets that can't handle my Venti American bricks by maintaining a lawn that looks like the grounds at Versailles. I like my giant mortgage exploding into a thousand pieces and ricocheting around the planet from bank to bank until everybody owns a piece of me and nobody wants to lower my rates.

And you know what? I fucking love the idea of someone totally unrelated, just some fat fuck watching a computer screen in New York, somehow getting rich off of that happening. That rules. That's American as shit. I love it so much I hope the government pays that fucker's bonus for the next two years. Hell yes!

I love reading about micro lending and carbon credits and motherfucking Oxfam and then having a good laugh. I support Israel 100% at all times, because that's terrorist shit over there. I like to think about people too weak from starvation and disease to blink the flies out of their eyes while I wait for Steven to package my MeatZZa Feast in a HeatWave carrier and bring it to my door. I like no-kill shelters for retired racing dogs and laws that allow doctors to refuse the morning after pill to a sobbing teenage girl. God loves America's rape babies.

America is the greatest country on earth. What other country is full of people who have never talked to their immediate neighbor, but have armed themselves to shoot him if he walks into their backyard to pick up a Frisbee? Not Norway or Spain. How many weapons caches are there in Amsterdam? How many church buses full of Norinco Type 56s are buried behind a farmhouse in Hertfordshire? You Brits may know how to tear the shit out of a soccer stadium, but are you prepared for the events of 2012? 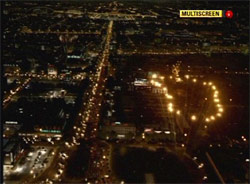 Just wait until those CGI fireworks are marching along the Champs-Elysees. Then you America-haters will be begging for our help.I am. I'm ready for whatever is in the cards, whether it's Red Dawn, Left Behind, or ID4. I stay frosty by wearing a Ghillie Suit when I paintball and I stockpile MREs I buy on ebay. I have a camping chair that can support 1000 pounds, which is good, because if I keep training this hard I'm going to need it. All of those people who are so quick to blame this country won't be complaining when the Michigan militia saves the world from the Chinese.

Oh, yeah, that's right. Forgot about them, didn't you? Just because a black man got elected you forgot about the CGI fireworks at the Olympics and the creepy eight year old gymnasts they grow in vats. I think you'll be singing some Lee Greenwood when those lithe little munchkins get unleashed on Europe. You'll need us when they're annexing India and bombing you with knockoff F-22s they built from a PDF they downloaded off of the Lockheed website.

For the rest of you, those of you unafraid to wear the Stars and Stripes on a shirt in Hamburg or London, I tip my Stetson. Don't be shy. Don't be bashful. By God, we live in the greatest country on earth, and don't let anybody tell you otherwise.