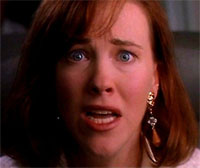 Those crocodile tears may help you balance the pH in your koi pond, but they won't do you any good here.Ladies and gentlemen of this courtroom, we gather today for justice. Before you sits the true face of suburbia. Yes, behind the façade of proper lawn maintenance and appropriate picket fence color choice lurks two monsters not far removed from your fairybook stories of witches and boogens. "Child endangerment;" it's an ugly term, wouldn't you agree? Yet the McCallisters would have you think otherwise. To them, this incident is nothing but a mere trifle. But I assure you, ladies and gentlemen, we are not looking at a simple case of a young child left "home alone."

Let us wind back the clock to that fateful Christmas season. It seems so recent, doesn't it, Mr. McCallister? First class tickets to Paris, eh? Tell me, just how many ruined lives helped fuel your way to the City of Lights? Your Honor, this has everything to do with the matter at hand, for within the bounds of these comfortable leather chairs, the McCallisters finally made first contact with their inborn parental instincts. No amount of complimentary wine and aged cheese could dull the ache that even roundworms experience when their young are expelled from a dog's anus. It must have been hard for you two -- a problem money couldn't fix. But then, you were never one to waste money; were you, Mr. McCallister?

The jury has heard your protestations. Yes, in your absence, you called the police to "check on" your son, Kevin. But one must wonder just what information you neglected to tell the police. To think of the many ways an innocent eight year-old could injure or kill himself in that opulent three-story manor of yours. Of course, any police officer would gladly find a way inside if you so much as left the stove running. I shudder when I imagine the chaos and agony that could befall such a sheltered child when surrounded 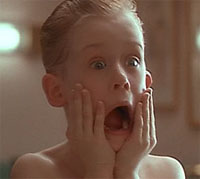 Iconic? Yes. The abject depiction of unbridled child-horror usually is.by the deadly tools of adulthood. Tell me, Mr. and Mrs. McCallister -- what was it you told the police in order to save face? Because I've squared off against several child murderers in this very courtroom, and not once did the law simply "give up" without first establishing a perimeter and following protocol. Not even the dogs were brought out in an attempt to find young Kevin, which leaves this courtroom with one lingering question: why?

Of course, we all know what happened, Mr. McCallister; how could we not? Though the headlines differed, each story of your son's travails spoke of a terrified child fighting for his life against two violent home invaders. One has to think of the morals instilled in young Kevin, to value a mansion's worth of tacky, overpriced Sharper Image and Lands' End merchandise more than his own life. Instead of running to the police or a neighbor -- not that you upper middle class types would deign to make eye contact with anyone who dared stray close to your property -- Kevin instead chose to hole himself away in the McCallister Death House, with only a loaded air rifle -- used without supervision, obviously -- and various household instruments of destruction to protect himself. The three foster families who have taken Kevin in since these events speak of a hateful, traumatized child, who now only finds joy in ritualistic bedwetting and animal abuse. Surely, you have sent your son down a dark path. One day, Mr. McCallister, you may find him "getting even with dad." 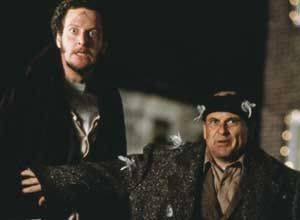 You may have seen these two taking a "urinal bath" at your nearest bus station.So who were these men, driven off only by a boy's survival instinct and access to paint cans? One, a registered sex offender, his most recent arrest being for indecent exposure in a local Suncoast's "western" section. And again in the food court outside of the Suncoast. And again in the parking lot outside of the food court. The other offender, linked to a series of B and Es in which the unfortunate occupants were tied up and ejaculated upon multiple times, often against their will -- may the courtroom forgive my glibness, but the true meaning of the term "wet bandits" should not be lost on any of you. No, these were not the criminals we see on the television, seeking nothing more than access to cookie-themed cereal; the villains repelled by the McCallister's unfortunate child could have easily flayed the boy alive, all the while exposing themselves and masturbating furiously. And all of this could have been prevented by a simple head count.

Ladies and gentlemen of the jury, when you leave to discuss the fate of two citizens who treat their offspring no better than that of a hamster, think of the young, blonde child, whose horrible, chemically burned cheeks and multiple spider wounds will prevent him from ever living a life considered normal. This "good son" will never grow up to be a "pagemaster;" instead, he is doomed to the life of a "party monster," forever in search of the one he can call "my girl." Uncle Buck, and may god have mercy on your souls.