Perhaps Some Animes Are in Order?

I share a minor running gag with my coworker (and fellow Something Awful writer) Johnny "DocEvil" Titanium. He'll saunter to my desk, steaming cup of coffee in hand, his features softened in dreamy contemplation. He'll say something like "I have an idea…" or "so, I was thinking…" He'll hem and haw and dance around the issue, filibustering for as long as possible before he gets to the point: "perhaps some animes are in order?"

It's a sort of game we play: one of us tries to convince the other one that he has something important on his mind, perhaps even something work-related, and just when we have the other person anticipating an interesting revelation, we spring the little six-word trap. "Perhaps some animes are in order." It's kind of like saying "deeeez nuts," in that it's all about catching your opponent unaware (it's also similar in that it's completely stupid).

The phrase itself is just a sentence we saw written on the internet somewhere. The statement was written completely without irony; it was the sincere suggestion of a young man with the sudden epiphany that maybe, just maybe, it was time for an anime or two. The lighthearted purity of the sentiment has stuck with us, despite the fact that neither of us knows anime from a hole in the ground. I've seen Spirited Away, if that counts, and half an episode of Cowboy Bebop. Jon, to the best of his recollection, hasn't seen any anime.

Our shared anime experience doesn't go much past Matthew Sweet's "Girlfriend" video from 1991. In fact, the two concepts are so conflated in my mind that I can't even read the word "anime" without getting Girlfriend stuck in my head (cherish this, my friends, for it is the only time you'll ever see "anime" and "girlfriend" in the same sentence).

Imagine our shock, then, when a fantastical set of circumstances landed us at the epicenter of anime this weekend. Fanime, a thousands-strong festival of anime activity, was taking place only three blocks from my humble San Jose apartment. I couldn't even walk down the street without rubbing shoulders with the pink-haired disciples of anime, clad in their wooden shoes and bathrobes, armed with gigantic swords made of plywood and tinfoil.

There was no "perhaps" about it. The stars had aligned. Some animes were definitely in order. Jon and I headed to the convention center, and into the very heart of anime. 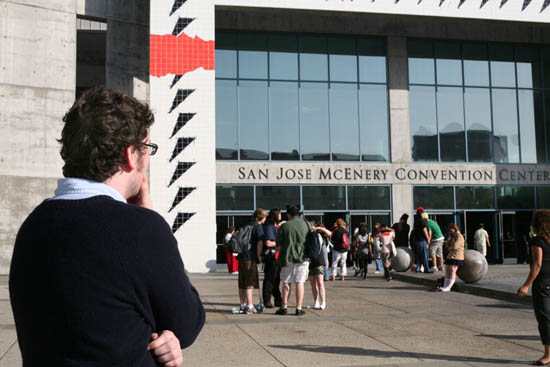 Here's yours truly at the outskirts of an unexplored culture. And into the anime we descend…