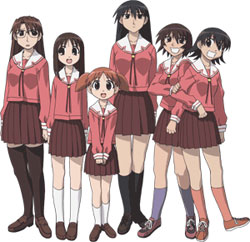 Just ask, Jerry, and I'll introduce you to these lovely ladies.Important discoveries aside, Jerry, you and I are far from on good terms. Your behavior continues to remain seriously unhealthy, and I have, from recent Wikipedia research, determined you have several personality disorders. I also think, Jerry, you are becoming co-dependent and are acting out as a result of your inability to properly express your feelings of respect and admiration to me. Don't think I didn't see that look on your face the other day. You were clearly coveting my Azumanga Daioh t-shirt. I would have taken that shirt off right there and handed it to you if you asked, because I'm that kind of brother.

I may understand you, Jerry, but that doesn't mean your attitude and emotional abuse doesn't hurt. Really, I should start billing you, Jerry, for all the time of mine you waste. I spent 3 hours on the phone with my therapist talking about you, Jerry. That's time I could have spent doing something important and productive, like writing a novel or a screenplay or composing a symphony. Think about what you're stealing from me and the world the next time you decide to have one of your episodes and accuse me of looking like a "beached whale giving birth to the world's largest stick of butter." What does that even mean, Jerry? It's nonsense!

Heh, this reminds me of you high-fiving your jerk dad after he accused me of looking like "rotting potatoes sliding down a hill." You know, Jerry, treating your parent like he's just another bro is a sign of what's called "emotional incest." Look it up one day, brother. No wonder you're so screwed up.

To tell you the truth, Jerry, I feel sorry for you now more than ever. After experiencing all your lifestyle has to offer, I can safely say it's pretty shallow. My voyage into the mainstream world you value so much only served to reconnect me with my one true love: the noble artistic medium that is anime. I am grateful I was not swept into your world, because it surely would have robbed me of my dignity and self-worth. 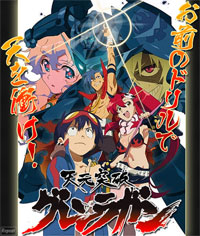 You, me, and the classics. It's a date!I've been talking to my therapist a lot about you, Jerry, and he thinks we would benefit from couples counseling. I'm definitely game, and told him you would be too. Our appointments are Monday night, so I hope you don't mind sacrificing football for a while. This is definitely what's best for us, Jerry. Especially after everything we've been through. It's time we really start the healing process.

You know, after a few sessions, I think you'll wake up and see the light. When that happens, you and I will sit side by side diving into moving works like Shijou Saikyou No Deshi Kenichi, My Wife is a High School Girl, or Hiroyuki Imaishi's stellar Tengen Toppa Gurren Lagann. I know you won't show it because you've got to keep up that tough guy act of yours, but inside I bet you're smiling like crazy at the prospect. Jerry, so am I. So am I.