Mankind got arrogant. We split the atom, unlocking a force greater than the sun, and built weapons that could turn the earth to dust. We elected warmongering politicians who used those weapons on each other, bringing an end to civilization as we know it. Walking through the blackened ruins, surveying the horrors of nuclear annihilation, I'm reminded of the hubris of my species, the fragility of life, and the grand indifference of the universe.

I have to admit, though, a lot of these horrors would make great band names.

Did you ever see that Deep Purple video (if you didn't, it's too late now) where future scientists visit a post-apocalyptic earth, dig up some instruments and play a kickass rock concert for a bunch of feral teenagers? It's pretty farfetched, since there's no electricity in a nuclear wasteland and most scientists probably like Bach or some shit, but if it did happen, those guys would have no problem coming up with a name for themselves. They could literally just pick the first thing they saw. Toxic Rain, Atomic Shadows, Pile of Skulls... There are great band names everywhere!

Just the other day, I met a mutant biker named Max Carnage. How about a band called Max Carnage and the Hazmats? I pitched this to Max as he was bouncing my head off a concrete abutment. I think he liked it, because he began beating me even more vigorously. In hindsight, I probably shouldn't have given away such a great name, but on the plus side, if I ever start a band I now have a permanent b-minor ringing in my head to tune my instruments to. 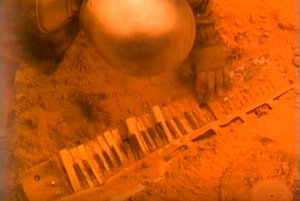 It's an embarrassment of riches how many awesome band names I see every day. This morning while searching for food I saw the remains of a skyscraper ravaged by an atomic blast and thought, hey, "ravaged" has a nice ring to it. Maybe a nu-metal band called Ravaged, but with the "e" written backward, or maybe a bunch of periods so it looks like an acronym. R.A.V.A.G.E.D. I spray-painted some logo designs on a wall over some lame-ass graffiti about avoiding something called the "shriekers" and how the food they've been dropping from army planes is actually poisoned.

Sometimes I come up with lyrics too. Once I took a bunch of potassium iodide pills to protect myself from fallout, only to get iodine poisoning. In between vomiting, I wrote this verse.

I've got a bunch more. The hard part is matching them with the right band name. Some days, a lyric feels like a Twisted Conduit song. Other days, it feels more like a Carbonized Corpse song.

Okay, I should probably stop thinking about band names for a while. It's distracting me from basic survival. Got to focus. Check my spike traps for dogs I can skin to make winter clothes. Set up some overturned hubcaps to collect rainwater. No band names there. Next I have to find an abandoned pharmacy and get something to treat these purple boils on my arm. They might be a sign of radiation sickness, or as the Japanese used to call it, disease X.

Hmmm, Disease X... I wonder if that name is taken.